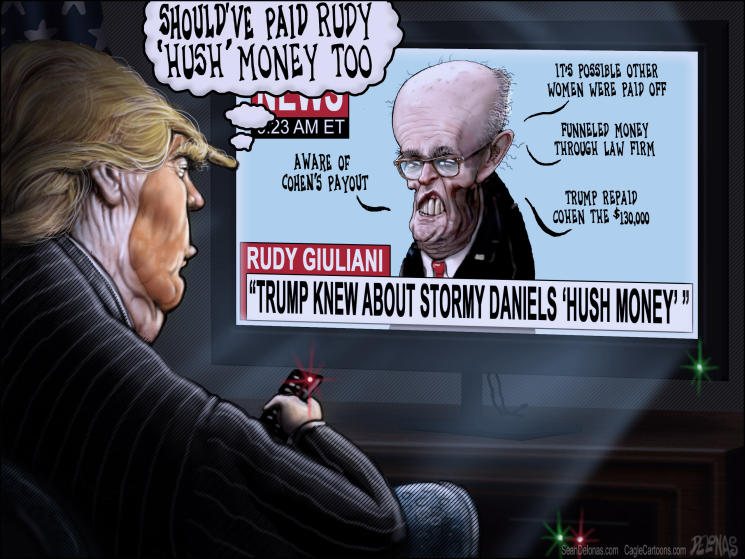 In addition to serving as the president’s mentor, attorney, and fixer, the late Mr. Cohn is an ignominious footnote in our nation’s history for the persecutorial role he played during Sen. Joseph R. McCarthy’s investigations into communist activity during the 1950’s.

Every passing day brings further evidence that the president has found his Roy Cohn redux. His name is Rudy Giuliani.

Heralded as “America’s Mayor” in the wake of 9/11, Mr. Giuliani has reemerged ,’ demonically, phoenix-like, eyeglasses often crazily askew ,’ from the political netherworld into which he slithered upon leaving the New York City Mayor’s office and failed bids for the U.S. Senate and the presidency.

Without question, during Mr. Giuliani’s first few years as Mayor, he enforced arcane laws and statutes to clean up New York City. In that, he proved to be an unabashed success. Unfortunately for Mr. Giuliani, he was unable to sustain the popularity, good-will and achievements of his first term throughout the entirety of his reign.

And then came the fall of the Twin Towers, after which Mayor Giuliani was catapulted onto the national stage. It was a public redemption that even the most callous of politicians could appreciate. Giuliani stood amidst the rubble of Wall Street almost godlike. He was a hero for our time.

What happened to that guy? The answer: that guy never existed.

Rudolph Giuliani was and is a figment of his own imagination. To many, however, he was and is one nasty son-of-a-gun. Granted, those who share those feelings most might include his two (soon-to-be three) ex-wives; discarded advisors and confidantes; former colleagues; political opponents; mob bosses; and white collar criminals.

While not inventing the Racketeer Influenced and Corrupt Organization (RICO) statute, as U.S. Attorney for the Southern District of New York, Rudy Giuliani used it in an innovative and highly-effective manner against New York’s Mafia families, drug traffickers, wayward politicians, and Wall Street manipulators alike; who, as Mayor, punished scofflaws to the fullest-extent possible.

This former standard-bearer for law and order now believes, however, the president of the United States can get away with murder – of fired FBI Director James Comey, one of Mr. Giuliani’s former subordinates – without facing the same consequences that we mere mortals could expect to face. Like arrest, incarceration, prosecution, conviction and, in some instances, execution. He doesn’t believe the president can be subpoenaed. Or indicted.

President Trump may sound a bit crazy when he voices opinions such as this. But he’s crazy like a fox; his are Machiavellian efforts to retain power.

Rudy Giuliani, on the other hand, appears to be as crazy as a loon.

Shamelessness, however, was clearly his Modus operandi when he served in that very same Justice Department.

That point was reiterated 29 years later in Comey’s book “A Higher Loyalty,” when Comey noted there was an unwritten code among those working for Mr. Giuliani back then that “Rudy was the star at the top and the successes of the office flowed in his direction.”

Now, he is a man in search of relevance and, once again, the limelight.

In another era, Rudy Giuliani might have used the RICO statute against Donald Trump and his “Organization” much as he did when combating organized crime, Ivan Boesky, Michael Milken, and the Wall Street firm of Drexel Burnham Lambert. Instead, he is a man who appears to be hellbent on taking down the institutions he once served and the Constitution he once swore to uphold by propagating the lies and obfuscations of the Trump administration to whoever will listen.

So much for truth, justice, and the American Way.