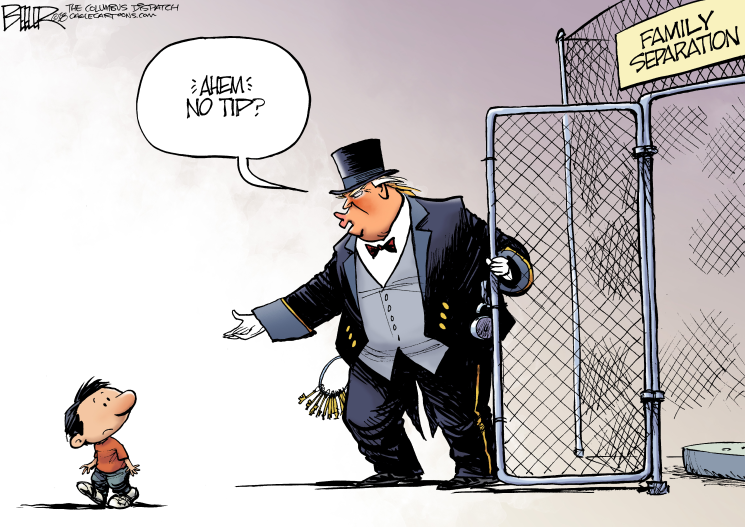 This is us, America. This is who we are at this precise moment in time. A nation that separates families. A nation that interns children and infants in detention camps far from their parents, farther still from those the Trump administration perceives to be his meddlesome enemies; those whose prying eyes, brimming with empathy, and voices of reason are a threat to his regime.

This is us, America. This is who we are – or have become – in the eyes of the world.

This is exactly what other autocrats – among them, Vladimir Putin, Xi Jinping, Kim Jong Un, and Turkey’s Recep Erdogan – would like their own people to believe. For them, this is the perfect “I told you so” moment. A time when they can accurately point to America and say “They are no better than us. They are not who they claim to be.”

The president’s immigration policy is a disaster. To those true believers, those who continue to ride the Trumpian Trolley to hell, the president is a man of his word. In their eyes, he is fulfilling the promises he made while campaigning for office. He tells them what he wants them to hear and believe.

President Trump and his apostle, Jeff Sessions, are, in the minds of their followers, guiding Americans toward security and salvation. Yet, the path these two men and others in the administration are forging leads us further into the wilderness, isolating us from those who remain free to speak the truth and true to their values.

As in previous authoritarian regimes throughout history, the president and his minions have sought and found a scapegoat. For the Romans, it was the Christians; for the Czars, it was the downtrodden who threatened their autocratic reign and personal fortunes; for the Third Reich, it was the Jews, Roma, homosexuals, and political opponents.

The president claims those being detained are criminals, murderers, rapists, and members of roving gangs from whom only he, the great and powerful Trump, can save us. Save us from infants and children being removed from the loving arms of their parents?

This distorted outlook on immigration is not about safeguarding jobs. It is not about protecting the vast number of Americans from criminals. The president continually points to the “animals” of the MS-13 gang as one rationale for his immigration initiatives. What he doesn’t tell his followers is that, according to FBI statistics, the grand total of MS-13 members currently residing – legally or not – in the U.S. accounts for approximately .00323 percent of the population; a number that has remained stable for the last dozen years.

The president’s immigration strategy – if there is one – is not about border security or making America great again through ludicrous trade tariffs. It’s about separating “us” from “them.” It is a page ripped from a scrapbook of atrocities perpetrated by others; torn by “advisers” and “experts” whose lack of decency and ignorance of history are causing this presidency to become increasingly dangerous.

The Trump immigration policy – and it is the president’s policy, not that of his Democrat or Republican predecessors, no matter what he proclaims – is an abject failure. Rather than protecting the American people, he is currently in the process of creating a new generation of terrorists whose separation from their parents at a tender age is causing them incalculable psychological and physical harm; harm that may come back to haunt us at some point in the future in a manner more violent than the president could ever imagine.

President Trump’s legacy may well lead to the radicalization of children and infants whose memories of America and its people may rival the perception of Palestinian children held hostage beyond the walls and fences of the Gaza Strip; those whose dire circumstances have led them to participate in violent assaults upon Israel.

Today, the Department of Defense is readying military bases – inaccessible and off-limits to the press and public – capable of holding 20,000 people. Pentagon spokesman Lt. Col. Michael Andrews told reporters it is for the internment of “unaccompanied alien children.” Innocent children who truly are being treated as though they were “animals.” So much for President Trump’s recent executive order to keep undocumented families together.

Americans must bear witness. We cannot turn our backs on reality. Right now, activists, the clergy, journalists, righteous citizens, and an increasing number of true public servants from both parties are attempting to expose and condemn the tragedy currently unfolding on our southern border. In so doing, they are struggling to reclaim the ever-diminishing reputations of us all and rekindle the beacon of hope for the marginalized and oppressed that was once the U.S.