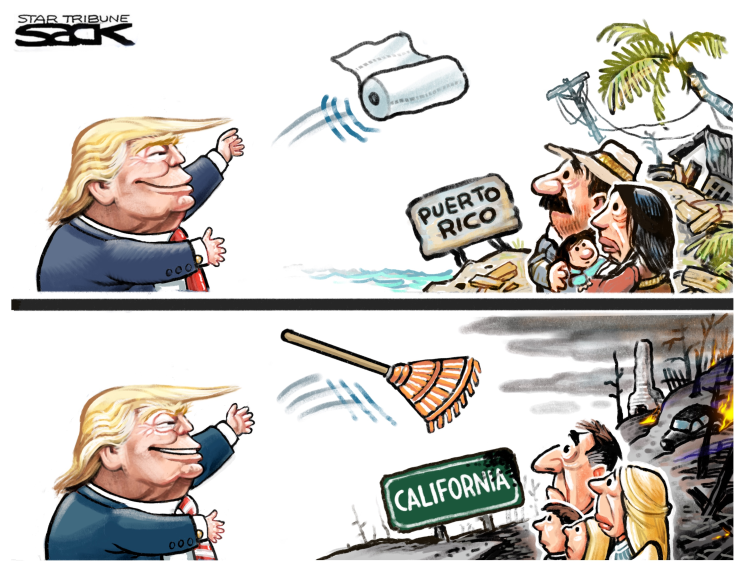 The president is not popular in California. Results of the 2016 election, in which Hillary Clinton garnered nearly 9 million votes and trounced Trump by a margin of almost 2-to-1, are the most obvious indicator. Although having his star on the Hollywood Walk of Fame sporadically come under siege by paint and pick-ax wielding fans appears to be further confirmation.

No matter. Californians are just a bunch of losers anyway. Trump doesn't like losers. Nor does he like to lose. And when he does, it's inevitable someone else will be made to pay. Big league. In this instance, that might mean the 6,646 individuals who have already applied for Federal Emergency Management Agency assistance to find temporary housing, pay for home repairs, or buy groceries, new clothes and furniture.

The men, women and children who have lost homes, friends, family members, pets, possessions and livelihoods to conflagrations in both the northern and southern parts of the state are already victims.Any actions on Trump's part to keep them from gaining access to the nearly $50 million in FEMA aid that had already been earmarked would only further victimize them.

Then again, why should they be any different than the 800,000 federal employees who are now jobless as a result of the president's intransigence over funding for his wall or steel picket fence or whatever he wants to call it? Or the 13,000 migrant children currently held in detention centers? Or the thousands of family farmers and small business owners whose livelihoods are threatened as a result of his ill-conceived and poorly executed trade wars?

Playing with the lives of working-class men and women is nothing more than a means to an end for Donald Trump. No matter the cost.

While the president's declaration of Ventura, Los Angeles, and Butte counties as disaster areas was a momentarily presidential move, he couldn't leave well-enough alone. It was quickly followed by his pronouncement that the devastation wreaked by wildfires in California was a result of "poor forest management."

This analysis was part of a thoughtful, thoroughly-researched screed unleashed by the president via Twitter that went on to say, "Billions of dollars are given each year, with so many lives lost, all because of gross mismanagement of the forests. Remedy now, or no more Fed payments!"

What to do with those already-allocated funds? Here's a great idea: take them back from people in need and use them to pay for the president's steel slat monstrosity on the southern border. Better yet, how about clawing back disaster relief funds set aside for Puerto Rico, Florida and Texas as well? Why go to the trouble of declaring a national emergency when so much money is readily available? After all, those billions of dollars would be much better spent fulfilling ludicrous campaign promises rather than helping struggling U.S. citizens. And by throwing a few Republican bastions in the mix, no one could possibly accuse Trump of red-blue bias (that bias is limited to other colors in this president's box of crayons).

Questions of the legality of the president's use of funds apportioned for disaster relief, as well as bipartisan antipathy toward the proposal, have resulted in some of the president's more lucid advisers walking back his more outrageous suggestions. Still, the president's transactional approach to governance is disturbing and should serve as a clarion call no matter what one's political beliefs or place of residence are.

True national emergencies arise. At any given time, any one of us could fall victim to fire, flood, hurricane, tornado, earthquake or volcanic eruption. Catastrophic events happen. And insurance doesn't always provide a solution to the problems that ensue.

Americans need to trust that petty partisanship will in no way interfere with our health, safety and well-being. We should feel confident that our leaders will have our backs regardless of whether one lives in a state that did or did not vote for the president. Left to his own devices, that appears unlikely so long as Donald Trump continues to occupy the White House and dominate members of the Republican Party.

Sadly, the trail of destruction left in the wake of this administration and the toll it's taking on all of us may one day rival any natural disaster yet to befall this nation.