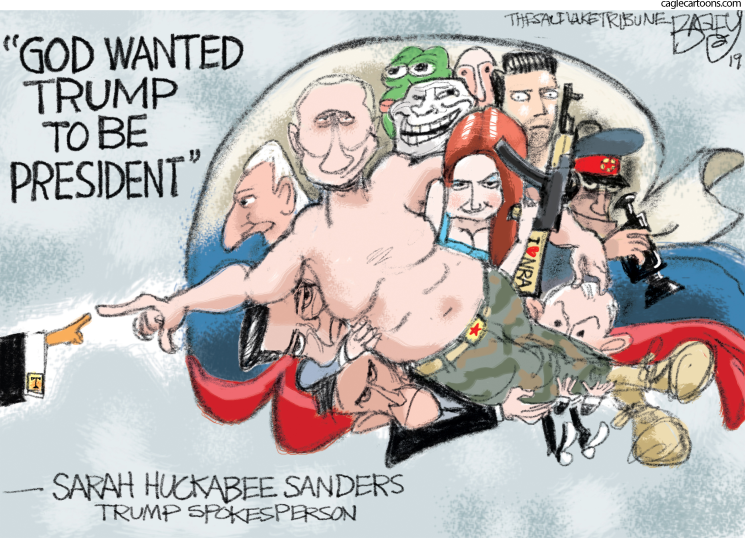 If Trump is Innocent, Why’s He Still Helping Russia?

Democrat and Republican members of the Senate Intelligence Committee recently announced that no direct evidence of a conspiracy between Russian intelligence operatives and Trump campaign officials has been uncovered by their investigation into Russian meddling in the 2016 presidential campaign.

Despite the president’s mistaken belief that he has been fully-exonerated (he hasn’t), the more pressing issue is whether he’ll finally accept the U.S. intelligence community’s well-documented conclusion that Russian operatives did everything in their power to shape American public opinion and exert influence over voters.

Based on newly-disclosed actions taken by his administration, it appears that he either doesn’t or (more likely) doesn’t want to. The Daily Beast reports that two teams of federal officials whose mandate was to fight foreign election interference are being dramatically downsized. This will leave the U.S. woefully unprepared to address election threats in 2020. Apparently, the president is quite pleased by the past work-product of his comrades in the Kremlin and expects them to deliver once more.

The U.S. Intelligence Community’s Worldwide Threat Assessment, presented to Congress a few weeks ago, states “we anticipate that all our adversaries and strategic competitors will increasingly build and integrate cyber espionage, attack, and influence capabilities into their efforts to influence U.S. policies and advance their own national security interests.”

That appears to be confirmed in reports from multiple media outlets detailing attempts to use Facebook and Twitter to launch disinformation campaigns. According to Politico, Twitter recently removed 2,617 “malicious accounts” that may have originated in Iran. Facebook announced that it had suspended 783 Iranian pages and accounts on its platforms, including Instagram, for “engaging in coordinated inauthentic behavior.”

Twitter has suspended 418 accounts that appear to emanate from Russia for mimicking behavior similar to that exhibited by the Internet Research Agency – the Russian troll farm responsible for many of the propaganda campaigns that raged during the 2016 election. It also took down 2,000 accounts located in Venezuela that have engaged in a “state-backed influence campaign targeting domestic audiences.”

No reasonable (emphasis on reasonable) leader could possibly ignore ongoing assaults on the hearts and minds of the American people. Nor would he ignore the advice of his hand-picked intelligence chiefs. Yet, this leader does. Because his friends in the Motherland continue to employ cyber warfare as an ongoing offensive strategy, quite possibly designed to bolster his stranglehold on the White House. It should come as no surprise then that the Trump administration is taking steps to ensure that this barrage of disinformation continues to rain down on the American people unimpeded.

Not so within the Putin Regime. They’re very much afraid that outside forces will employ tactics like those used against the U.S., causing the Russian people to rise and challenge Putin’s leadership.

Legislation passed in 2015 by the Duma, the lower chamber in the Russian Parliament, requires that personal data of Russian citizens be stored on servers located in Russia. This should not by any means be construed as a measure designed to protect that country’s citizens. Instead, it is an attempt to circumvent external servers that power Facebook, Twitter and Google, allowing security officials to monitor dissident activities and deny the Russian people access to sites where the free-flow of information and speech might threaten those in control.

Officials at the highest levels of the Russian government and our own are in both instances taking steps to solidify their positions of power. In the case of Putin and company, attempts are being made to close the floodgates to information, while Team Trump is doing everything it can to leave them wide-open.

Clearly, the president fears that concerted efforts on the part of our intelligence community to prevent our adversaries from tampering with elections, sowing discord, and spreading disinformation might cause the Trumpian knot to unravel. And the legitimacy of his presidency to be called into question yet again.

Whether Trump directly engaged or conspired with outside forces to corrupt the results of the 2016 presidential election is still unclear. Results of both the Mueller investigation and a more vigorous investigation by the Democrat-controlled House Permanent Select Committee on Intelligence may paint a more accurate picture once their work is finished.

Believing he has been vindicated by the Senate Intelligence Committee, President Trump continues to grow more emboldened. Which, to use one of his favorite expressions, is “sad.” And a mistake. Because his administration’s recent efforts to stymie future cyberattacks call into question whether there really is “No collusion.” And that will only cause government watchdogs to sniff around his administration more aggressively.