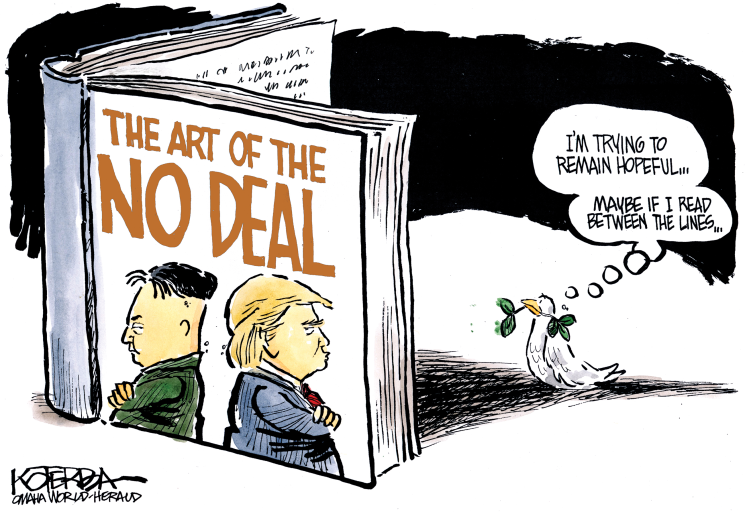 If there’s a sucker born every minute, our commander-in-chief is clearly the man of the hour.

What’s fascinating about this president is how an expert con man (as he is) can so easily be conned.

In nearly every foray abroad, President Trump has exhibited either gullibility, complicity or a deliberate willingness to accept at face value the word of foreign dictators and autocrats. Of course, he does this while choosing to ignore the intelligence and counsel provided by his own expert advisers.

Trump has proven, once again, that he is a world-class chump.

After making a 14,000-mile trip to Vietnam and back for his much-heralded second round of “Deal or No Deal” with North Korean strongman Kim Jong-un, the president returned empty-handed. Save one thing: Kim’s assurances that he had absolutely nothing to do with the death of 22-year-old Otto Warmbier, the Ohio college student taken hostage and murdered by the Kim regime.

While Kim may not have actively participated in the torture that led to Warmbier’s neurological injuries, subsequent coma and eventual death, nothing of any magnitude takes place in North Korea without his express knowledge or approval.

The 2016 arrest and incarceration of a foreign national – especially one holding American citizenship – would have certainly been brought to Kim’s attention. Warmbier was a bargaining chip for Kim then and remains so even after he has been laid to rest.

When questioned by a reporter as to whether he’d discussed Warmbier’s treatment during his meetings with Kim, the president said the dictator told him that “he didn’t know about it and I will take him at his word.”

On yet another of Gullible’s Travels to Vietnam (for the 2017 APEC summit), Trump was asked whether he and Vladimir Putin had discussed Russian meddling in the U.S. presidential election. Trump told reporters, “[Putin said] I didn’t do that. I really believe that when he tells me that, he means it.”

Maybe it’s something in the air in Vietnam or, perhaps, just jet lag that makes the president so susceptible to digesting disinformation when it’s being spoon-fed to him by foreign strongmen. Whatever the case, Trump’s reaction is a variation on a theme: “I will take him at his word”; “I really believe that when he tells me that, he means it.”

When asked last fall whether Saudi Crown Prince Mohammed bin Salman had a hand in the execution of columnist Jamal Khashoggi of The Washington Post, the president said the prince told him he didn’t. Of the Saudis, Trump added, “I want to believe them. I really want to believe them.”

What the president really believes is that if he repeats the same refrain over and over, his dreams will come true. Some psychologists call this “magical thinking.” Others call it delusional.

There is nothing magical about cold-blooded murder. There is something pathetic, however, about a president who is quick to accept the assurances of world-class criminals.

Not so the family of Warmbier. When their son returned home shortly before his death last June, they expressed gratitude to President Trump’s administration for the “quiet diplomacy” that led to their son’s release. Gratitude, however, has its limits.

In response to the president’s assertion that the North Korean dictator was telling the truth when he said he had nothing to do with Warmbier’s murder, the young man’s family issued a statement that read, “Kim and his evil regime are responsible for the death of our son. No excuses or lavish praise can change that.”

This president obsessively fixates on the media, branding them purveyors of “fake news” even when what’s reported is credibly sourced and documented. He ignores the findings of his hand-picked team of intelligence professionals. He bends truth and reality to suit his will. Yet, when it comes to leaders of enemy states and authoritarian regimes, he readily accepts and embraces outright lies and disinformation, allowing them to play him for a fool. Trump does so not just at his peril, but ours as well.

That is not only inexcusable. It’s dangerous.