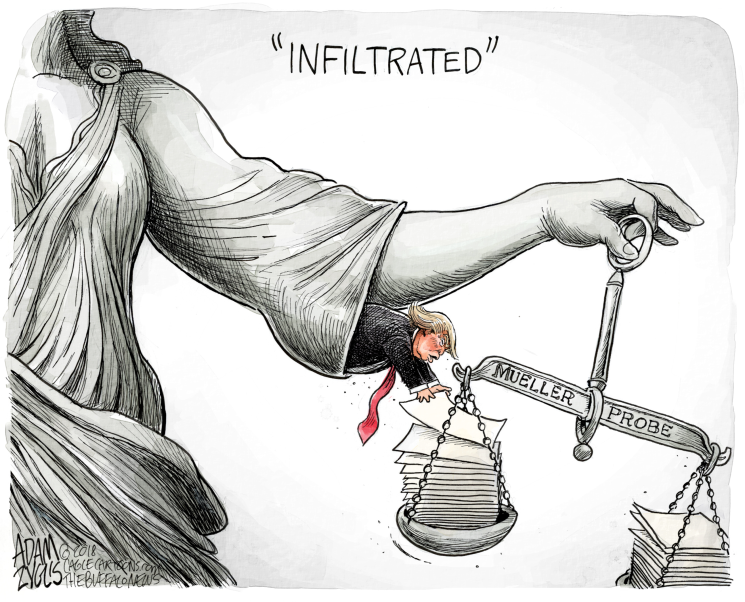 It’s been said that, for the American people,the only thing shorter than their memory is their attention span.

Now, more than a year and $10 million later, the investigation into allegations that the 2016 Trump for President campaign dealt with Russian operatives to influence the election outcome is putting that theory to the test.

Despite signs the country has grown weary of it,the investigation led by Special Counsel Robert Mueller plods on, providing grist for the media, national Democrats and, of course, for President Trump’s Twitter feed.

Notwithstanding speculation that the end is in sight, the investigation has careened off in other directions unrelated to its initial task of determining whether, in fact, collusion occurred and whether Trump campaign operatives were a part of it.

Mueller has also extracted a guilty plea from former National Security Adviser Gen. Michael Flynn for lying to the FBI and has indicted 13 individuals and three companies related to the Russian bots.

The president’s legal team – notably former New York City Mayor Rudy Giuliani — has taken note of the public memory/attention span concept as well, arguing the investigation has gone far afield and the American people are so bewildered by the mass of conflicting accounts, charges, counter-charges and multiple investigations they are beginning to believe it’s hopeless to attempt to sort it all out and make any sense of it.

Tales of spying, secret dossiers, cloak and dagger rendezvous, clandestine contacts, FBI raids, payoffs, Russian billionaires, a blizzard of subpoenas, and millions of dollars changing hands have poured forth for more than a year, creating a surreal air of confusion.

Giuliani, of course, has the well-being of his client at heart when he insists Mueller conclude his work quickly, act on his findings and put the issue to rest before this year’s mid-term Congressional elections, diluting – if not eliminating – its impact as a turning point campaign issue.

Trump, in the meantime, continues his daily “fake news, witch hunt, no collusion” Twitter blasts, driving the daily news cycle and providing an enormous amount of television time to academics, consultants, opinion writers and anyone who ever served in government and wants to share an opinion.

Mueller has been tight-lipped about the investigation, offering no hint of how far along it is or when he may bring it to an end although Giuliani said last week that Mueller had set Sept. 1 as a reporting date, coincidentally the time when tradition has it that campaigning begins in earnest.

It’s a given that Russian apparatchiks meddled in the presidential election, using cyber attacks to drive messages aimed at influencing public opinion.It’s a given as well that the effort was designed to benefit Trump and undermine Hillary Clinton.

For all the strum and drang drama, Trump’s hard core base has remained steadfast in its belief that Mueller is out to get the president, accepting the witch hunt characterization.

The Resistance has remained equally as steadfast in its belief that Trump is an illegitimate president, his election tainted by Russian interference and carried out with the campaign’s participation.

Despite persistent rumors that Trump intends to fire Mueller, the sentiment in the Congress favors allowing him to complete his task without arbitrary deadlines or political pressures.Any anxiety they feel about its timeline is kept largely to themselves.

Giuliani is certain to ratchet up the pressure in interviews and public appearances, making his case that Mueller has already taken far too much time, has uncovered nothing to implicate the president and has strayed well beyond his initial charter.

There is a risk certainly to the president and to Republican congressional candidates if the investigation drags on into the election season.Mueller confronts a risk as well and could open himself to criticism for deliberately prolonging his work, keeping the investigation at the top of the news to influence the mid-term outcome.

If memories are short and attention spans shorter – as Giuliani appears to believe to some extent – it is in his and Trump’s interest to try to force Mueller’s hand. Mueller in all likelihood has one eye on the calendar as well.