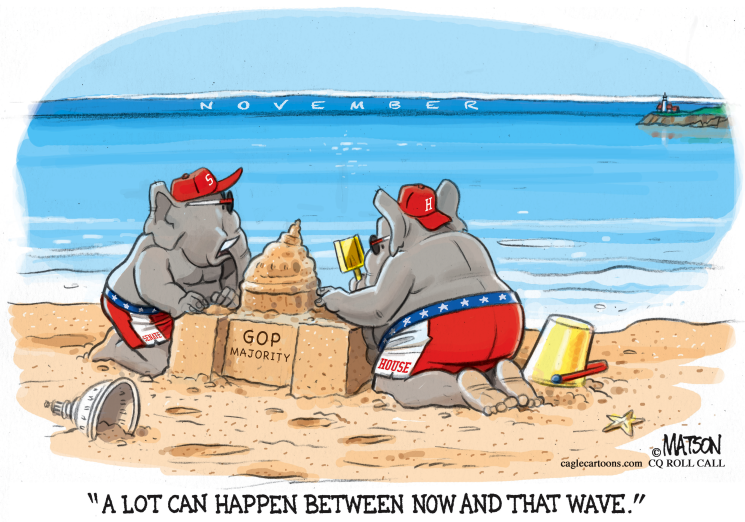 When writer, commentator, polemicist, talk show host and National Review magazine editor William F. Buckley ran for mayor of New York City in 1965, a reporter asked what his first act would be if elected.

Buckley replied he would stand on the sidewalk outside the New York Times building “and catch the falling bodies.”

He was spared his mission of mercy, receiving 13 percent of the vote in losing to John V. Lindsay.

Should Republicans maintain control of the House and Senate this November, there won’t be enough catchers available in the country to break the falls of editors, columnists, television talkers, academics and consultants flinging themselves from the parapets of their office buildings.

Maintaining control of the Congress would not only be a victory for President Donald Trump but a validation of his policies and style of governance – two things much of the national political media has been attacking for more than a year.

If their years’ barrage of critical coverage came to naught, it’s a stark indication that media influence of public affairs and politics has diminished dramatically.

Make no mistake; there is a great deal to criticize the Trump Administration for and it is the media’s professional duty and obligation to focus on the misstatements, embellishments, falsehoods, ethical lapses, internal bickering, legal entanglements and eccentricities which gush forth from the White House daily.

It is the media’s role to report and dissect them, provide context and assess their meaning. That responsibility, though, has been undercut by displays of bias and personal dislike which, in turn, have fueled Trump’s unrelenting assault on “fake news” and dishonest reporters.

The level of hostility between the Trump White House and the media has reached a level seldom seen. It began on the administration’s first day and has continued unabated. Each side holds the other in contempt and neither bothers to make any effort to hide their feelings.

It’s had an impact as measured in polling, which shows that only 40 percent of Americans have confidence in the media to report fairly and accurately.

Democrats are still well positioned to regain control of the House, but the party’s chance of doing so has diminished alarmingly from the lofty position it occupied a few months ago.

Trump’s job approval, for instance, has risen from the mid-thirties to the mid-forties and, more concerning for Democrats, their edge in the generic ballot has shrunk from the mid-teens to a statistically meaningless two per cent.

The Republican resurgence has been driven in large measure by the marked improvement in the national economy, one Trump has attributed to his tax reform/tax cut program.

While Democrats have mocked it, the president has touted tax relief as responsible for the historic low unemployment rate, increased wages, business expansion, consumer confidence, and a bullish stock market.

The Democrats’ argument that the rich have benefitted greatly while middle income earners have experienced marginal help hasn’t gained much traction.

House Minority Leader Nancy Pelosi’s dismissal of the tax cuts as “crumbs” was remarkably condescending and will likely rank alongside Hillary Clinton’s description of Trump supporters as “a basket of deplorables” as the greatest rhetorical blunders of the year.

The president and Republican congressional candidates can point to the burgeoning economy as proof of their ability to deliver sound and responsive government.

Democrats, on the other hand, seem to be flailing, desperate for a message other thanopposing all things Trump.

Moreover, the ties that bound the party together have frayed badly, pulled apart by an ideological brawl between Bernie Sanders liberalism and the centrist wing.Party leaders have had limited success in mediating the dispute even as they fear that nominating far left fringe candidates will result in losses in November.

It is significant that a fair number of Democratic candidates, obviously convinced that Pelosi is the embodiment of a political culture many Americans despise, have publicly pledged to vote for someone other than her for House Speaker should the party win control.

There is ample evidence that Republicans have made up ground in their campaign to keep Congress in their hands, but such an outcome is by no means assured.

Trump remains a polarizing figure and hanging like a storm cloud over the entire political environment is the ongoing investigation led by Special Counsel Robert Mueller into allegations that the Trump campaign colluded with Russian operatives to influence his election.

It is unclear when Mueller will finish his task orissue a report. If completed prior to the midterm election, his findings will determine who will be a catcher like Buckley or a jumper.