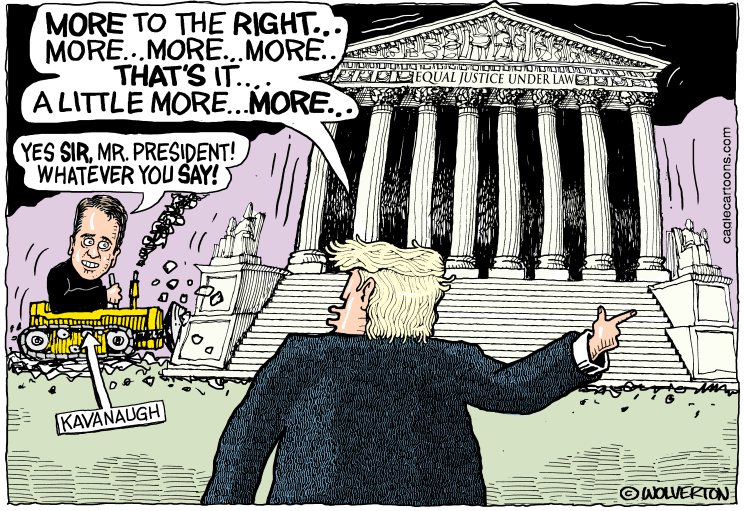 Sabers drawn, the Democratic Party’s far left has unleashed its charge up Capitol Hill to rout President Trump and send his U. S. Supreme Court nominee Brett Kavanaugh fleeing into the surrounding woods.

If they glance back over their shoulders, though, they’ll find that a handful of their foot soldiers are MIA, having concluded that this is a hill not worth dying for.

Within minutes of the President’s announcement, Democratic Senators and an array of private interest pressure groups elbowed one another aside in their rush to position themselves in front of the television cameras.

They warned all manner of evil would befall the republic should Trump’s choice be confirmed. It is not the nominee’s qualifications or experience at issue here- he currently sits on the U. S. Court of Appeals for the District of Columbia- it is simply that, because he is Trump’s choice, he is unacceptable.

Some, like New Jersey’s Cory Booker, New York’s Kirsten Gillibrand and Massachusetts’ Elizabeth Warren, concluded their 2020 ambitions could be furthered by a fulsome embrace of the hard left agenda. None will pay a price at home for opposing Kavanaugh and will achieve their goal- a risk free media ride throughout the confirmation process.

However, these three, their like-minded colleagues and the private interest organizations are aware that lacking a bombshell revelation during the Judiciary Committee hearings, they hold a losing hand.

Minority Leader Chuck Schumer of New York will continue to offer the obligatory message of opposition, but even he has conceded publicly options to defeat confirmation or delay a full Senate vote will fail.

Schumer is aware that colleagues like Sens. Joe Manchin of West Virginia, Claire McCaskill of Missouri, Joe Donnelly of Indiana, and Heidi Heitkamp of North Dakota face difficult re-election campaigns and a vote to deny Kavanaugh’s nomination could well tip the balance in favor of their Republican challengers.

Moreover, these four have made it clear they will act on the nomination in their best interest and will not be stampeded into a rigid party line demand.

Schumer is playing the long game, understanding that since the nomination is virtually assured, placing four Democratic senators in jeopardy this year greatly reduces the odds of the party achieving control of the Senate in 2020, a presidential year in which the election will be a national referendum on Trump and his policies.

Convincing the far left of the realpolitik at play, though, is a challenge for him.Many in that wing reject what they see as the outdated and discredited politics of the past.

They rejoiced at the upset victory of Alexandria Ocasio-Cortez, a 28-year-old American

Democratic Socialist who defeated long time Congressman Joseph Crowley in New York, and claimed her success was proof that party centrists and moderates are on the wrong side of history.

Schumer must find a path to avoid alienating those on the left while impressing on them that power is achievable only through election victories and that the overwhelming majority of Americans respond negatively to candidates standing on socialist platforms.

House Minority Leader Nancy Pelosi, for instance, suggested Ocasio-Cortez was an anomaly, a victory in one Congressional district and not representative of the country as a whole.A massive shift in demographics in the district was disregarded by Crowley and he fell victim to accusations that he was hopelessly out of touch with his constituents.

While Ocasio-Cortez’ message of abolishing the Immigration and Customs Enforcement agency, reforming the criminal justice system, offering tuition-free colleges and universal health care fell on receptive ears, her success was attributable more to Crowley’s perceived indifference than to her agenda.

Schumer must also tread carefully in dealing with the activist groups mobilized and spending money to block Kavanaugh’s confirmation.

Most of these groups have been reliable party supporters, financially and organizationally, and believe Kavanaugh’s confirmation is the place to make a stand.Millions of dollars have already been spent or planned in states where they feel votes can be swayed in their direction by predictions of a Supreme Court, with Kavanaugh as a justice,overturning abortion rights or access to health care.

Keeping these groups in the fold will require Schumer to pledge support for their causes but convince them they must remain clear-eyed about the dim prospect that Kavanaugh’s nomination can be defeated.

The nominee may be the battle, but the presidency and a Democratic Congress in 2020 is the war.

The last Democratic president, when confronted by critics of his policies, was fond of responding: “Elections have consequences.”