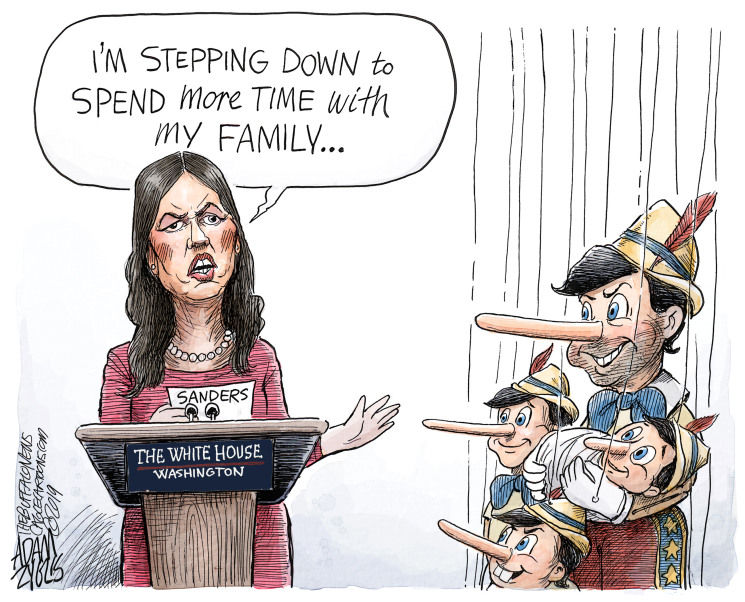 As White House Press Secretary Sarah Sanders packs up her office and prepares to leave the West Wing at the end of the month, it is tempting to wonder how she'll look back on her two years serving as the voice of what is arguably the most unorthodox administration to ever lead the nation.

There is no more thankless job in western civilization than serving as the spokesperson for President Trump while dealing on a seven-day a week schedule with a media whose collective persona on any given day ranged from hostile to whiny, respectful to belittling, smug to courteous, small-minded to insightful.

Her daily press briefings became steadily more contentious and argumentative until she decided to ditch them altogether. Whether the President will permit Sanders' successor to resume the tradition is unclear, but the relationship with the media is unlikely to change significantly because the Trump is convinced he is his own most effective press secretary. His designated surrogate is expected to follow the narrative as laid out on the boss' Twitter feed, no matter its accuracy, its disconnect from reality or its often personally insulting characterization of his critics.

The media also bears some responsibility for the death of the daily briefing, turning it into a self-aggrandizing play to the television cameras exercise while playing directly into the hands of a president who believes they are "the enemy of the people. "

Sanders' frustration often came through in her briefings as she defended Trump or struggled to explain to a roomful of skeptical reporters the president's latest rant, his frequently cockeyed allusion to historical events or his vague hints at taking unilateral action to punish any person or nation which displeased him at the moment.

The rhetorical contortions Sanders and her predecessor Sean Spicer suffered through as they sought to clarify the presidential commentaries and rationalize his actions were not only personally embarrassing but seriously undermined their credibility. Once lost, credibility is impossible to restore.

More than once, she shaded the truth and tiptoed perilously close to the line separating honesty from lying. Her assertion that she'd been contacted by FBI agents disturbed over the activities of Special Counsel Robert Mueller was a blunder which haunted her and was used by her critics as evidence of lying in the service of her boss.

The acrimonious relationship between the administration and the media clearly reached critical mass and Sanders faced no option but to end the briefings. The situation was beyond repair and any effort to patch things up, acknowledge the mutual antagonism and move past it would surely fail.

She does not, however, deserve the abuse heaped on her as she heads for the exit. By flinging insults at her, reporters, cable news talking heads, columnists and editorial writers serve as reminders of the low esteem to which the media has tumbled. Former press secretaries eager to regain relevancy and B-list entertainers whose audiences deserted them long ago piled on and embarrassed themselves.

Express their differences with her if they must, but display some class by at least acknowledging the immense difficulty of the job, the relentless pressures, and the self-control necessary to holdtongue and temper when confronted by ill-informed and disrespectful self-promoters masquerading as journalists.

To be sure, she chose the arena in which to compete, knowing full well that the environment could often be a vindictive, merciless blood sport and she could walk away at any point.

The line she walked - representing a President who consistently displayed a casual appreciation for the truth while striving to maintain her credibility - often proved impossible. At some point, departure was inevitable; it was simply a matter of when.

The job is one in which scars outnumber medals and anyone who takes it believing otherwise, should find another line of work.

Sanders has insisted that her tenure in the White House was an honor she'll carry forever, that it was the job of a lifetime Doubtless there were times when it was all of that, offset by times when it was not.

She's headed back to her home state of Arkansas where she should sit in a rocker on the front porch, watch the sun sink over the Ozarks, smile to herself and tell CNN to go to hell.