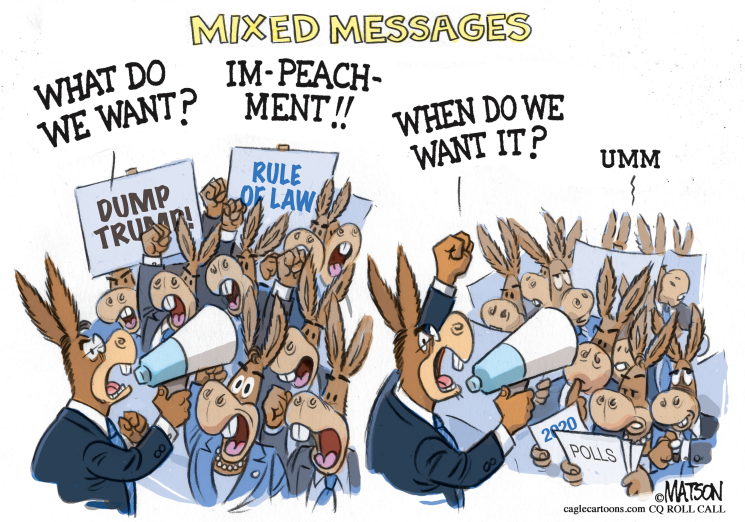 In March, 2004, Democratic presidential candidate Sen. John Kerry, asked to explain his vote in favor of an $87 billion appropriation to support wars in Iraq and Afghanistan, replied: “I actually voted in favor of the $87 billion before I voted against it.”

In the way candidates’ remarks are reduced to campaign shorthand, his response became “I was for it before I was against it.”

His candidacy began to crater as critics pounced on it, accusing him of flip-flopping or a crass attempt to have it both ways, mollifying the hawks in his party while reassuring the doves that, deep down, he shared their outlook.

His “I was for it before I was against it” comment endured for 12 years as perhaps the most damaging utterance by a presidential candidate until supplanted by a smirking Hillary Clinton’s condescending description of Donald Trump supporters as “a basket of deplorables.”(The deplorables had the last laugh.)

As it struggles to develop a coherent message and credible position on bringing articles ofimpeachment against the president, the House Democratic majority has arrived in Kerry territory – “we’re for it and we’re against it.”

It has fallen to an increasingly harried Speaker Nancy Pelosi to thread the needle. She’s forced to reconcile the conflicting understandings of the impeachment process while brokering an armistice between the vocal “impeachment now” crowd and the centrist newcomers who fear their re-election prospects. Many represent districts carried by Trump in 2016 and worry that if impeachment dominates the 2020 campaigns, their seats will be lost.

Allowing the impeachment issue to overpower issues such as health care, infrastructure, gun control and the economy, for instance, Democrats risk the futures of many freshmen members whose victories forged the party’s House majority in the first place.

A Democratic Congressional Campaign Committee poll supports their concerns, showing that 54 percent of voters believe Congressional Democrats’ primary focus is impeachment but a mere 10 per cent believe it should be.

The confusion surrounding the impeachment movement was exemplified when both Pelosi and her top deputy, Steny Hoyer of Maryland, appeared to contradict Judiciary Committee Chairman Jerrold Nadler. Pelosi emphasized that only the House itself can begin impeachment proceedings while Hoyer pointed out that impeachment investigations hadn’t yet begun.

Both points were jarringly and embarrassingly at odds with Nadler’s insistence that his committee has begun an impeachment investigation.

It was the Kerry “I was for it before I was against it” principle writ large, contributing to the continued inability of party leaders to deliver a cogent, unified message to the American people on where it stands on arguably the most serious issue facing a democracy – removing a president from office for committing crimes.

The moderates who have urged a more cautious approach believe that turning a sitting president out of office rightfully is the responsibility of voters and, in the absence of clear and convincing evidence of wrongdoing, such an action will feed the perception that the foundation for impeachment is a difference over policies and a personal dislike.

The onus falls on Pelosi. So far, she’s kept the torch and pitchfork crowd at bay, insisting that support of the country at large is crucial before impeachment can proceed and that point has not been reached.She has also pointed out the required 218 votes in the House in favor of impeachment have not been reached. And forcing a full House vote only to see it fail would be an unmitigated disaster for the Democrats.

At the same time, Pelosi must be sensitive to the centrists, understanding that the majority (and her future in the Speaker’s office) relies on their re-election, which will be driven by solid legislative accomplishments, rather than trading Twitter insults with the president.

It’s up to Pelosi to craft the message. John Kerry won’t cut it.

Trump Is Dragging A Dead Woman Through The Mud

by Dick Polman
Timothy Klausutis, an innocent American who was despicably victimized on social media this month by Donald Trump, has written an extraordinary letter to the CEO of Twitter. This excerpt will bring you up to speed: "Nearly 19 years ago, my wife, ...
Why We’re ‘Not All In This Together’

by Christine Flowers
So many of us are parked in front of our television sets these days, more out of necessity than desire. After hundreds of hours of viewing, of clicking the remote because I'm too lazy to walk the 3 feet and manually change the channel, of enduri ...
Panic As Expiration Date on Trump’s Immigration Order Approaches

by Joe Guzzardi
Time is short to the expiration of President Trump's Executive Order that suspended some immigration, and expansionists are pulling out all the stops. At stake is employment-based visas' short-term future, specifically whether the White House wi ...