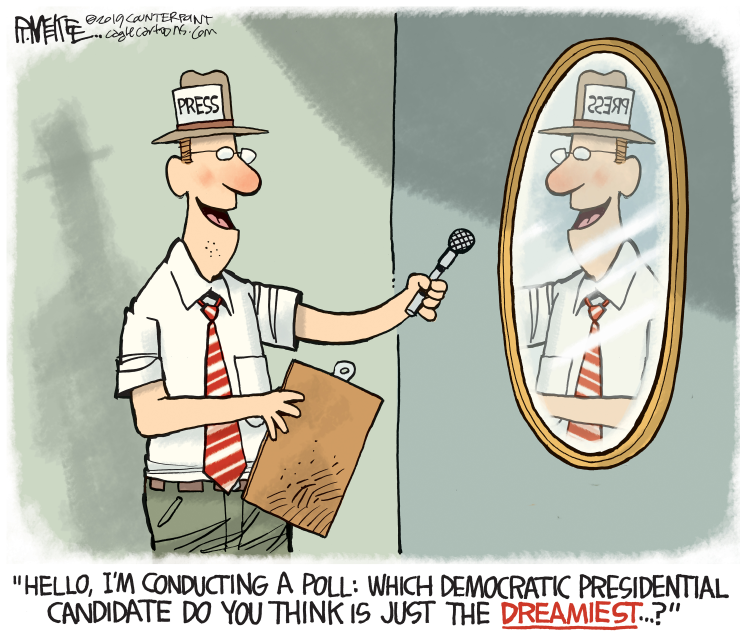 “Newspaper editors are men who separate the wheat from the chaff and then print the chaff.”

No… It was uttered by Democratic presidential candidate Adlai E. Stevenson in 1952.

Using the media as a whipping boy is, of course, nothing new.Trump may have raised it to an art form – “fake news… enemy of the people” etc. – but criticism of the media has been as much a part of campaigning as lawn signs, posters, straw hats and balloons.

More history? Presidents Eisenhower and Kennedy both were critical of the media and, in the late 1960s and early 1970s,Vice President Spiro Agnew spent most of his time and energy berating the media with colorful alliterative phrases like these: “Nattering nabobs of negativism… effete corps ofimpudent snobs,” etc.

Lest there be any doubt, the atmosphere today is immeasurably more poisonous.Past criticisms seem almost quaint and gentlemanly.

In earlier decades, the power and influence of the print media was supreme, considering newspapers were virtually the only trusted source of news.It controlled the field, and attacks on it could be shrugged off or ignored altogether. Attacking the New York Times, for instance, was likened to throwing spitballs at a battleship.

The revolution in communications technology shattered those norms, loosening the grip of the print media on the public discourse.The vacuum was filled by an unfettered, undisciplined, unregulated amalgam of groups and individuals who drove political debate at a dizzying, nearly incomprehensible pace.

“I read it on the internet” became the default position in promoting or disputing a point of view. In-depth analyses of complex policy issues were replaced by Twitter, Instagram, 60 seconds on YouTube. Success is now measured by the number of one’s Twitter followers.There’s no need to appear insightful or understanding – just keep those thumbs working on a handheld keyboard.

No one has mastered this environment better than the president.He unleashes a daily barrage of Twitter messages – half truths, untruths, distorted historical allusions, conspiracy theories and exaggerations.

He has framed the public debate,forced the media to follow his lead, chase down his latest tirade, defend itself, and attempt to provide context and meaning to rapidly moving events.

In the process, too many have fallen into the trap of engaging Trump directly and personally, an understandable impulse but one which plays directly into the president’s hands.

As tempting as it is to respond in kind, it is a mistake for reporters to give in to it.Trump enjoys home field advantage and swapping insults with him is a losing game. There is no upside for the media to gamble its reputation simply because it desires the temporary inner satisfaction of getting the better of an exchange with the president.

The media’s responsibility is to cover him, report what he says and does, point out the flaws and the foibles, explain the impact of his actions and their meaning to the American people.In other words, do what reporters have always done.

Competitive pressures – the demand to get it first has erased the need to get it right – has undermined public confidence in the media.News judgment and the inherent skepticism which led to more intense questioning of sources have been overlooked. Errors are magnified, mistakes admitted, and stories retracted, all feeding Trump’s obsession with heaping humiliation on the offenders as evidence of a media to de-legitimize his election.

It is Trump, though, who has demonstrated his nimbleness in navigating the media landscape while compiling political points with his base. A handful of candidates for the Democratic presidential nomination – most notably Sanders – have discovered there is advantage to be gained and attention attracted by turning their wrath on the media.

The media has been dragged into what is arguably the most highly charged political environment in recent memory, subjected to accusations of sloppy and biased coverage,focusing on the trivial, taking the path of least resistance and ignoring issues.

Candidates routinely grumble and grouse about media coverage but it’s degenerated into public shouting matches and allegations of the most vicious personal sort. As unseemly as it is, it’s likely here to stay and worsen.

There’s no incentive to behave otherwise.

It almost makes one pine for the good old days – separating the wheat from the chaff while listening to the nattering nabobs of negativism and the effete corps of impudent snobs.

by Jase Graves
On a recent frigid day in February as I was entering Target to defrost my nose hairs and purchase a designer toilet brush, I noticed that they already had an array of skimpy women's swimsuits on display, which dredged up some disturbing memories ...