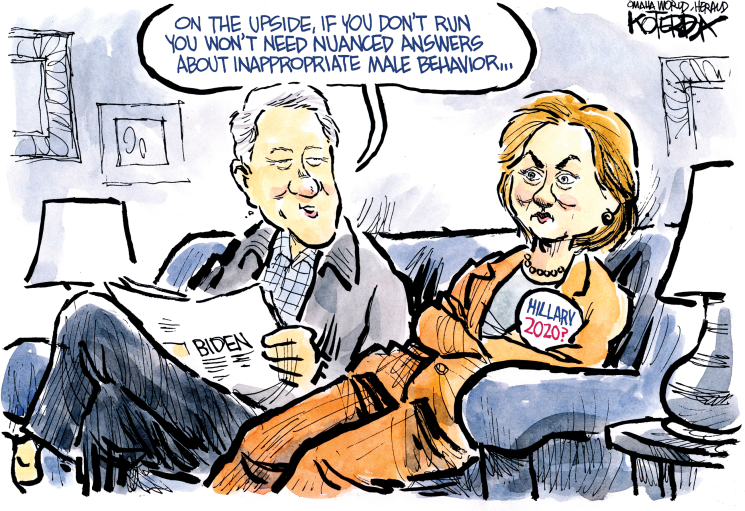 It began with 25 candidates. It’s been reduced by half, yet concern persists among Democrats that the party should look beyond the still standing contenders and seek an individual capable of party unification and persuade him or her to enter the race.

It is an acknowledgement that each of the current candidates is burdened by baggage – ideological or personal – but seem determined to take the contest through a string of expensive, exhausting and bitter primaries.

Former Vice President Joe Biden, whose lead has shrunk to single digits or vanished altogether, has been hurt by periodic mental lapses and scrambled syntax. His and his son’s involvement in governmental and business affairs in Ukraine hangs darkly over his head.

Voters will hesitate to deliver the presidency to a 78-year-old heart attack survivor – Vermont Sen. Bernie Sanders – despite his fervent and committed base.

Despite the party’s commitment to electability as the criteria for choosing a candidate, there remains concern that none of the three leaders measures up. The dilemma is in which direction should the party look for an alternative, someone it can rally around and convince the current field to abandon their quest.

To whom, might the party turn? Two names surface with some regularity: former Secretary of State and failed 2016 candidate Hillary Clinton and former First Lady Michelle Obama.

In typical self-aggrandizing fashion, Clinton has ginned up speculation about her availability with a series of public appearances, media interviews and a ubiquitous social media presence, criticizing Trump and basking in the attention. But convincing the current candidates to stand down for her would be a herculean task. She is a polarizing figure who many find untrustworthy and unlikeable, blaming her for booting away certain victory in 2016.

Clinton entering the race would not clear the field but tear the party apart, re-open wounds from 2016 and deliver to Trump the opportunity to raise her questionable – if not unethical – conduct as Secretary of State. The Democrats would be robbed of their most potent weapon – Trump’s behavior and possible impeachable conduct – by repeating the litany of accusations against Clinton.

While Michelle Obama carries none of Clinton’s baggage and could clear the field, her candidacy is wishful thinking. She is the country’s most admired woman, a bestselling author, and an eloquent advocate for the causes in which she believes. She and her husband are financially secure (the purchase of a $15 million beachfront mansion in Martha’s Vineyard, for instance) and both are loathe to surrender their comfortable blend of private and public life.

There is absolutely no reason why Obama would willingly take on what will surely establish a new low for the most brutal and brutalizing campaign in American history.

If unhappy Democrats intend to make a move, time is running out.The Iowa caucuses and the New Hampshire primary are little more than three months off. The window of opportunity to persuade an outsider to step in will slam shut at that point.

Three years ago, voters confronted two flawed candidates and were left to determine whose flaws were less egregious than whose. If 2020 is Trump versus Biden, Warren or Sanders, voters face much the same choice.

By the time the presidential election arrives, it is likely that Trump will have been impeached by the House but acquitted by the Senate.His campaign will be a relentless and savage effort toward vindication as much as his re-election.