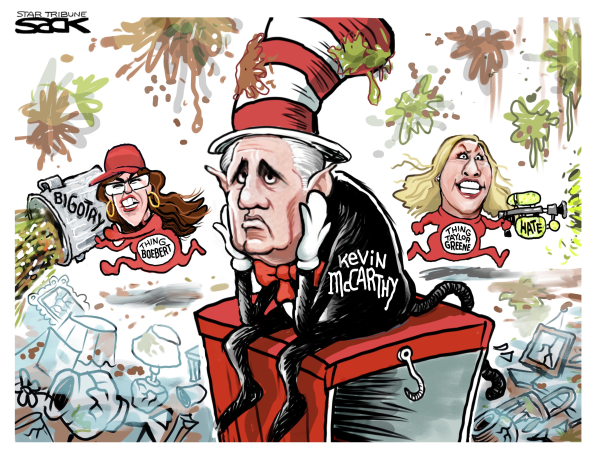 When Republican victories narrowed the partisan gap in the House of Representatives to eight seats in 2020 (221-213) and followed it this year by prevailing in the Virginia gubernatorial race, the party was positively ecstatic about its ever-brightening future and enormously enhanced odds of winning Congressional control in the 2022 midterms.

With those gains in hand, coupled with the sinking public approval ratings of President Biden, Minority Leader Kevin McCarthy could now spend more time and energy auditioning for the role of House Speaker, leading a Republican majority when Congress convenes its 2023 session.

His members have fallen to remarkably tasteless infighting, flinging cringe-worthy and profane invective at one another amid demands that the handful of Republicans who supported the trillion-dollar infrastructure legislation be drummed out of the party.

McCarthy’s efforts to restore some sense of order to his raucous caucus haven’t achieved a great deal, evidenced by his frustrated appeal for behavior because “this isn’t junior high school.”

One of his protagonists, Georgia’s conspiracy theorist Congresswoman Marjorie Taylor Greene, responded by boldly declaring that McCarthy had not locked up the votes to ascend to the speakership and hinted that he’d face serious challenges should the party regain control.

Greene, along with equally outspoken colleagues Lauren Boebert of Colorado and Paul Gosar of Arizona, have created a massive political and public relations headache for McCarthy by stoutly defending their controversial comments and ratcheting up their already overheated rhetoric, keeping the issue alive in the media and drowning out any Republican issue-oriented messaging.

Greene and Gosar were removed earlier from their committee assignments for their public comments ridiculing and threatening Democrats while House Speaker Nancy Pelosi is under increasing pressure to impose similar punishment on Boebert in response to the Colorado representative’s recent remark hinting that Minnesota Rep. Ilhan Omar, a Muslim, was a terrorist.

When South Carolina Congresswoman Nancy Mace criticized the anti-Muslim comments, Greene pounced on her, calling her “trash” to which Mace responded by calling Greene “crazy.”

When the House approved one part of the Biden administration’s infrastructure package with 13 Republican votes, it produced demands from the right the 13 be expelled from the party, a self-defeating insistence from a party already in the minority and trying to claw its way out in a favorable political climate.

While the Biden administration is under siege for its decisions on issues both foreign and domestic - including stubborn inflationary pressures on the economy and a resurgent COVID-19 pandemic - Republicans have been unable to take full advantage of the president’s troubles and instead are bogged down in a family brawl which shows no signs of abating.

McCarthy seems reluctant to move more decisively to rein in the far right elements, partly out of concern he’ll need their support in his campaign for Speaker and - more politically fraught - out of fear of offending former President Donald Trump, whose grip on the national party seems to tighten with each passing week.

McCarthy has stepped carefully in Trump’s presence, recognizing the ex-president’s popularity with the party base and understanding the influence he wields could block his path to the speaker’s post.

If Republicans regain control of the House next year, Trump will take a victory lap whether he deserves to or not and could play a decisive role in the leadership selection process.

McCarthy understands the delicate spot he occupies and appreciates the balancing act necessary to create at least of semblance of internal peace and calm.

Should the open combat continue, though, it is inevitable that the American people will begin to wonder whether a Republican Party unable to unify itself can be trusted to lead Congress and deal effectively with a president who is likely to be a lame duck, choosing to step down after the final two years of his first term.

While Democrats, too, have suffered under ideological clashes with its vocal and frequently demeaning rhetoric of its far left wing, it is the Republicans who will continue to draw greater media attention and absorb more damage to its quest for partisan advantage.

McCarthy’s audition for the speaker’s role has not gone well up to this point. A strategy of indecision and efforts to keep all party elements happy will only result in his opening night followed immediately by closing night.