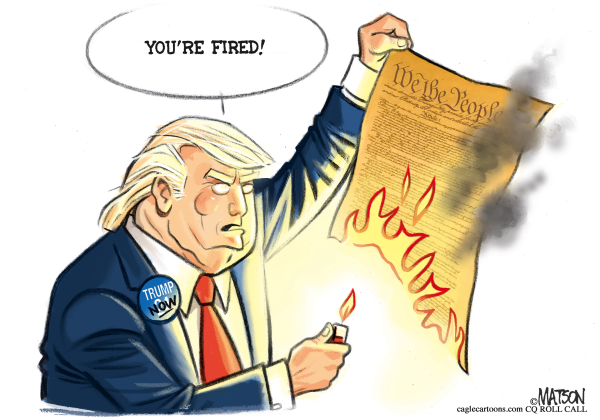 On Nov. 15, former president Donald Trump announced his candidacy for the Republican presidential nomination in 2024. Less than three weeks later, he ended it.

Not by a formal statement of withdrawal, but by thrusting a dagger into his viability by arguably the most deranged bit of lunacy to ever pass the lips of a public figure in the history of the republic.

The U. S. Constitution, he said, should be subject to “termination,” - his word - and he should be reinstated immediately as president because Twitter censored and suppressed potentially damaging allegations regarding President Biden’s neer-do-well son, Hunter.

Had the drug-addled Hunter’s activities been spread through Twitter, he claimed, the damage inflicted on Biden would have been so severe as to turn the election to Trump.

Even for someone whose career in private and public life is littered with exaggerations, embellishments and outright falsehoods, the suggestion that the Constitution - the governing document in the nation’s democracy - be treated as if it was a list of suggestions rather than a guarantee of freedoms, protection from an authoritarian government and security was a bridge too far.

It revealed Trump as someone who has slipped his moorings from sane and rational thought and descended into a political twilight zone where he can create his own reality and demand that the nation embrace it.

As criticism mounted, Trump seemed to realize he’d crossed a line and attempted to walk back his comments by - as usual - screaming “fake news.” It was too late, and from this point on he’ll be defined as someone who suggested ignoring the Constitution if it stood in his way.

For Republican leadership, the episode should be the last straw. There is no defense for Trump’s outburst, no arguing it was taken out of context or deliberately distorted by the media. His words appeared on Truth Social, the site he created after he was booted from Twitter: “A massive fraud of this type and magnitude allows for termination of all rules, regulations and articles, even those found in the Constitution.”

Note the word “termination” which clearly appears despite Trump’s belated cries of protest that he never uttered it.

It represented an escalation of the relentless two-year war Trump has waged to overturn the 2020 election, a process he claims was riddled with fraud that robbed him of re-election.

His act has worn thin and wearisome, and party leaders have become more outspoken in urging the party to move on. Republicans want to concentrate on 2024 to convince the American people that the Biden administration has failed on nearly every front and that a Republican president, along with control of Congress, can restore fiscal stability and address nagging issues like immigration reform and rising crime rates.

Trump, obsessed with his loss to Biden, stands in the way with his increasingly unhinged rants of election fraud.

Republicans who remained silent or dismissed his comments as typical Trumpian hyperbole are guilty of a cop-out bordering on cowardice. It is impossible to not cringe at the prospect of their ticket being led by someone to whom abiding by the Constitution is inconvenient and can be disregarded.

The media will be in full cry, demanding Republican candidates explain their view of Trump’s remarks and whether they continue to support him or his view. As campaign messaging goes, it is a disaster waiting to happen.

It is up to the party leaders to jettison Trump, marginalize him and make it clear that support and money will be in short supply.

It is imperative that the party act decisively and without reservation to deliver a statement that punching holes in the Constitution is a swift and irrevocable disqualifier.

It is past time for Senate Republican leader Mitch McConnell to drop his bourbon-sipping Southern gentleman facade and face down Trump directly.

If he reveres the Constitution, he has no choice.