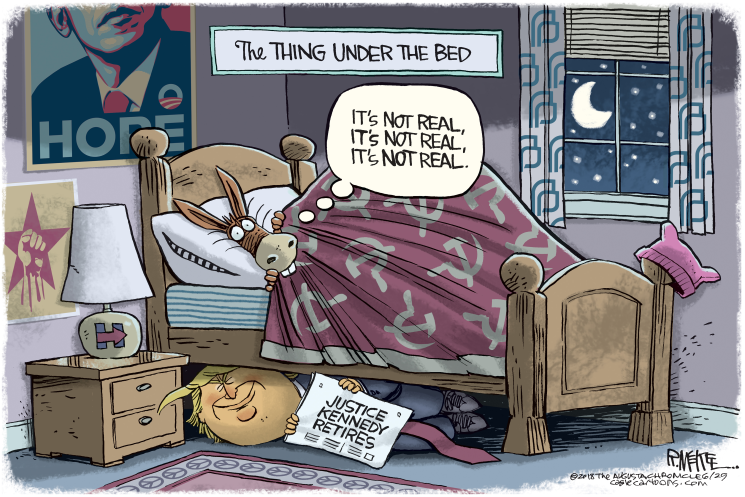 I have been waiting for Justice Anthony M. Kennedy to say the words “I retire,” for more than a quarter-century.

The first time I longed to hear that phrase was in 1992, when he penned the majority decision in Planned Parenthood v. Casey. This was the case, originating in Pennsylvania,that was going to put the stake through the dark heart of Roe v. Wade.

Except it didn’t go as planned.

Kennedy, picked by President Ronald Reagan and confirmed by a Senate that had just been through the Battle of Bork, was supposed to be the conservative vote that would finally tip the court in favor of life. He was a Catholic, a Republican, and he probably played golf. The jurist of conservative Catholic dreams.

Instead, he was conservative Catholics’ worst nightmare.

On June 29, 1992, Justice Kennedy read the decision he will be remembered for in pro-life circles, the one that reaffirmed the core principles of Roe and shot down any hope that unborn children would find protection under the Constitution.

The thing that stung, aside from the unexpected betrayal of a Catholic conservative’s embrace of abortion rights, was the language Kennedy used in his opinion. It was as if he were writing really bad poetry, the kind you’d find in the personal journals of a women’s studies major. He gave us what Antonin Scalia notoriously ridiculed as the “oh sweet mystery of life” passage:

“At the heart of liberty is the right to define one’s own concept of existence, of meaning, of the universe and of the mystery of human life.”

I read that and thought: Help.

As the years progressed, it only got worse. Kennedy took it upon himself to be the Great Liberator, removing the shackles from a prudish and – in his view – unjust society. He helped overturn the last remaining sodomy laws in the 2003 decision Lawrence v. Texas, and did so in the most unnecessarily generous way possible, noting that the government cannot “define the meaning of the [intimate sexual] relationship or set its boundaries absent injury to a person or abuse of an institution the law protects.”

That was “sweet mystery of life” on steroids.

This prompted an increasingly agitated Scalia to warn in his dissent that we had greased the slippery slope of moral relativism to the point that – crazy as it seemed – we’d be legalizing same-sex marriage in a few years.

It actually took 12 more years before Scalia’s prophecy became reality, in Obergefell v. Hodges, written by, you guessed it.

By that point, I’d given up on Kennedy.At least with the avowed liberals on the court, there was no hope they’d ever do anything I could support, admire, or even understand.

But Kennedy had been like Lucy in “Peanuts,” always promising that he’d come over from the dark side and stand with his conservative brethren. He might throw us a bone, like he did when he wrote the opinion banning a particularly gruesome form of partial birth abortion, but when we inched closer and got ready to kick the football, he yanked it away with another decision that sounded like a cross between Emily Dickinson and a Hallmark card.

Each year, on the last day of a session I’d think, maybe this is when he finally goes home to Sacramento to ferment grapes and write Harlequin novels under the pen name of DeAnthony Le Supreme. But each year, he’d wave happily and say, “See you in October.”

First, there was that amazing decision upholding the free speech rights of pro-life groups. Then came the shocking-not-shocking ruling on the travel ban. Then came the opinion against unions. And then, the 81-year-old justice announced his retirement.

I couldn’t catch my breath. It was hard to believe that the all-powerful swing justice was headed out to pasture.

I know that the Democrats will take this opportunity to fight President Trump tooth and nail. First, they’re justifiably angry at what the GOP did to Merrick Garland, blocking a vote on his nomination to the Supreme Court in 2016. They also know that Kennedy’s replacement has the power to shift the direction of the high court for at least a generation, and not in their direction.

All I know is that after 30 years, we’ll finally get opinions that don’t sound they belong in Oprah’s Book Club.

And, maybe, some justice for unborn babies.