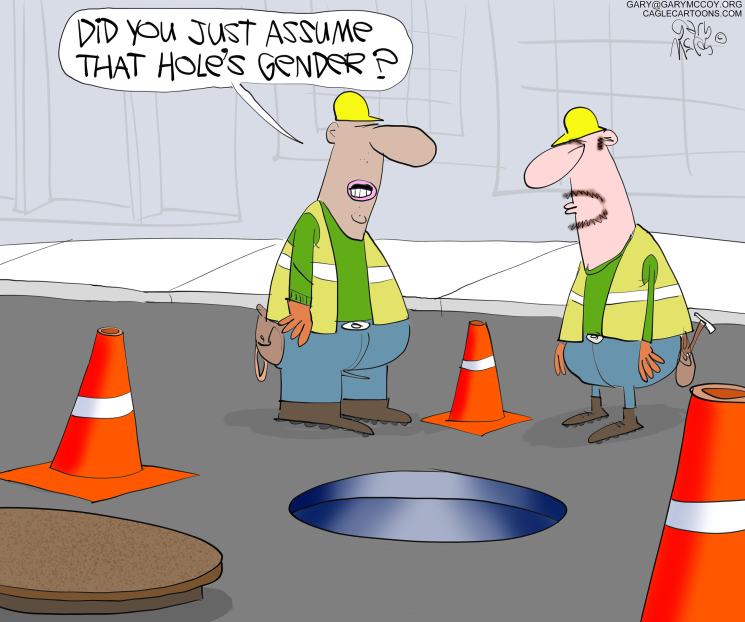 A friend emailed me recently asking if I'd ever heard of "Drag Queen Story Hour."

At first, I thought it was something like Oprah's Book Club, only with better-dressed participants. But I did a little research, and realized that this was a "thing" that had been going on for a while across the country.

In fact, if you go to Dragqueenstoryhour.org, this is what you find under a photo of a drag queen, a smiling mother and a petrified looking toddler: "DQSH captures the imagination and play of the gender fluidity of childhood and gives kids glamorous, positive and unabashedly queer role models. In spaces like this, kids are able to see people who defy rigid gender restrictions and imagine a world where people can present as they wish, where dress-up is real."

No child should be forced to confront radical ideas and controversial social movements before they are able to use the potty by themselves.We are talking about children who are settling in at the library to hear about Peppa Pig and Horton hearing a Who. This is a time when the little ones should be held in their mothers' laps, sipping chocolate milk or juice from their sippy cups as they become mesmerized by the magic of carefully chosen words.

This is not a time when some man in spandex, tulle and glitter should be confusing them with the sight of a dude with an Adam's Apple and well-developed biceps touching up his makeup and hitching up his brassiere.

There is a concerted effort afoot to normalize the whole idea of gender fluidity. Bryn Mawr College, my alma mater, has a guidebook containing approximately 70 different pronouns to be used when addressing strangers. Some school districts in Pennsylvania are allowing transgender students to use either the bathroom or locker room that accommodates their assumed "gender identity." Sexual orientation and identity are the new buzzwords for "tolerance" and "equality," and we are all supposed to fall in line and be as open-minded as Twitter will allow us to be.

All well and good, except when it comes to little children. No matter how evolved you want to be, no three-year-old should have to figure out why the person who sounds like daddy but looks and smells like mommy is reading them a story about rainbows and unicorns. We might think it would wash right over their heads and that they would just enjoy hearing the stories. But if that's the case, why does the Drag Queen web page talk about teaching kids about people who "defy rigid gender restrictions?" Clearly, there is some indoctrination going on here.

Haverford Township Library, my hometown library, announced that in honor of Pride Month, it was going to host a "Drag Queen Story Hour" on Saturday, June 15th. Some residents of the township seem happy enough with the idea. Phil Goldsmith, an old friend and former colleague who is the president of the board of the library, told me we're risking a very slippery slope if we start canceling events because of some opposition.

"Last year was the first time we had Drag Queen Storytime. More than 200 children and parents attended the event, one of our largest events of the year. We had virtually no complaints either prior to the event or afterwards. I attended and was blown away by the enthusiasm of the children and parents," Goldsmith said. "I don't expect everyone to agree with all of our choices - sometimes I don't - but I would hope that we can all agree that it is up to parents to decide what is appropriate for their children, not others."

Bill Lorraine, a physician and resident of Haverford Township, said he became very concerned when he first heard of Drag Queen Story Hour.

"Gender dysphoria is a serious psychological condition. It is not genetically determined, but rather is influenced by environmental factors," Lorraine said. "Therefore exposing young children to something like drag queen story hour can predispose them to the development of gender dysphoria and the many negative consequences that go with it."

Even though I sympathize with Bill, I also see Phil's point about wanting to celebrate diversity and be an open and tolerant community. But the rules are different when you are dealing with children.

A few years ago, when the Boy Scouts got into trouble with the City of Philadelphia for not accepting openly gay scouts, I wrote a bunch of columns about how adults should not impose their wishes and will on children. By that I mean that while it is all well and good to talk about tolerance and diversity and inclusion, we have to look deep into ourselves to determine if what we are doing is intended to help our kids, or to validate our own sense of worth as adults.

Reading the web page of Drag Queen Story Hour, it is clear that this whole program is designed to normalize gender fluidity and make "drag queens" just one of many accepted expressions of our "identity." To me, that is nothing more than adults trying to shove their agendas down the throats of little kids.

Now, about those overdue library fees...