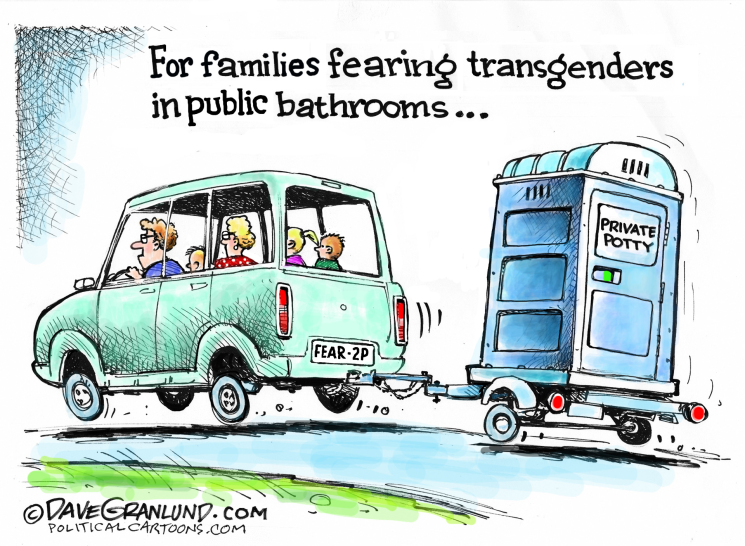 I was recently watching a cartoon marathon of The Flintstones with some fourth graders, and when the last line of the theme song blared from the TV, a 10-year-old girl looked up at me and said, "Were the Flintstones gay?"

For a minute, I had no idea why the sexual orientation of Fred, Wilma, or Dino was an issue, until I listened closely to the lyrics: "When you're with the Flintstones / Have a yabba-dabba-doo time / A dabba-doo time / We'll Have a Gay Old Time." I realized that a 10-year-old would not remember a time when the word gay just meant happy.

Now, we're all about celebrating identity and diversity. Some people are elated that we've left behind what they think of as prejudice and intolerance, while others are nostalgic for a past when children were allowed to be children and didn't have to deal with who they were, who they loved, and what "Drag Queen Story Hour" is all about.

Increasingly, the people who long for a simpler time are called bigots, and their voices are silenced by social ostracism, and sometimes lawsuits.

Case in point: the Supreme Court this week refused to hear an appeal from the Third Circuit's decision upholding a Pennsylvania school district's policy allowing trans students to use the bathroom of their choice. In other words, if you are a biological male but you identify as female, you get to use the girls' bathroom.

A number of cisgender students sued the school district, claiming that their right to privacy was being violated under Title IX, which allows for sex-segregated bathrooms. The school countered with the fact that they'd increased the number of single-use bathrooms for students who did not want to be faced with trans classmates undressing in front of them. They also argued that the same statute the plaintiffs were suing under, Title IX, included gender identity as a protected ground.

The Third Circuit, in a rare decision from the bench after only 20 minutes of deliberation, held that the plaintiffs had failed to show the policy caused them "irreparable harm" or infringed upon any privacy right. Judge Theodore McKee was particularly unimpressed with the argument that the trans students could use the single-use bathrooms if they felt uncomfortable, making a reference to school desegregation: "You could have come in here during Brown v. Board of Education and said let's go back to the status quo ... these types of cases wouldn't happen if the answer was always go back to the status quo."

In making the analogy with Brown, a case that established that the "separate but equal" paradigm was severely damaging to black children, McKee, who is black himself, seemed to be comparing a teenage boy who thinks he is a girl to a black child who knows he is black. I am open to debating the nature of gender dysphoria and when it is a pathology to be treated or a condition to accepted, but I do not think it is wise to legitimately mention Jim Crow in the same breath.

Obama-era rules interpreted Title IX to include "trans" and gender identification as a basis for "gender discrimination." Boyertown School District issued its bathroom policy under those rules, which required all federally funded schools to acknowledge broad transgender rights. President Donald Trump's recent rollback of certain trans protections implemented under the prior administration show that the issue is far from settled, and new cases may end up before the high court in the future.

Here's the reality: Some children are still figuring out their identities, and need to be treated compassionately. But, in my opinion, tending to their needs should not come at the expense of kids who don't deserve to be called bigots just because they want to go to the bathroom without making a political statement.