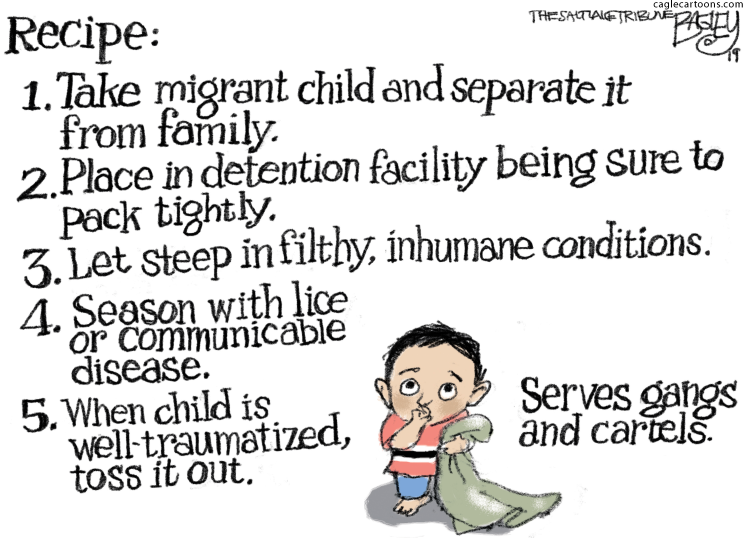 When faced with two women who each claimed to be the mother of the same child, King Solomon announced that he would slice the child in two and give half to each claimant.

One woman was pleased. The other wailed in sorrow, and begged the king to give the child to her opponent.

Solomon immediately understood that the woman who wanted to save the child even though it meant she'd lose him was the true mother.

There are no Solomons among us today. Children are once again being used as pawns and commodities in our national immigration debate, and the adults are fighting to gain philosophical and political advantage at their expense. The battles are waged on social media, on the pages of our national and local newspapers, in our homes and, most regrettably, in the halls of Congress.

Alexandria Ocasio-Cortez calls the detention centers which hold immigrant children "concentration camps," evoking the ghosts of millions of dead Jews, and she is rightly criticized by all decent people for that manipulation of history and language. While the literal term "concentration camp" could be stretched to include a facility where people are not able to leave and are held in temporary housing until their legal status is established, the congresswoman's intention was to equate what is going on at the border with Nazi death camps. This was not lost on the United States Holocaust Museum, whose spokesperson noted that it "unequivocally rejects efforts to create analogies between the Holocaust and other events, whether historical or contemporary."

But the fact remains that children are being held in places where they are not getting enough food, water, clean clothing, blankets, hygienic items and - most importantly - contact with caring humans.

President Trump points to the fact that his predecessor was the one who initiated a program that separated children from their parents, which is technically true. But when you dig a little deeper, you realize that Obama's plan was sporadic, while the Trump administration made a sustained policy decision to separate families as a disincentive to cross the border.

Congress dithers about solving the crisis at the border, with one side insisting on pouring money into a wall and refusing to engage in good-faith solutions for legalization, while the other side calls their opponents racists, evoking imagery of Nazi camps. And then, when the House finally reaches a consensus about funding to provide the detained children with the necessities we regularly give to prisoners and accused terrorists at Guantanamo, only a handful of Republicans voted in favor of the bill because the package didn't include anything for border security. Then late Thursday, the Senate's version of the bill was signed onto by a reluctant Nancy Pelosi, guaranteeing that some money and support will reach the children.

And this is where I realize that neither side in this debate has any incentive to find a solution to the crisis that is ripping this country to shreds.

This controversy is deep and wide and burning, echoing the rift our ancestors confronted over slavery, and it is already leaving scars that will not fade even with the therapeutic balm of legislation and reconciliation. The detained children are the canaries in the coal mine of our national morality, and seeing them in this sustained state of crisis and neglect says some troubling things about who we are content to be.

It is fair to worry about the larger, overarching policy issues when discussing immigration. But this moment is not about partisanship. Our recent historical past shows that there is enough blame to go around. And when we start pointing fingers at one side and give the other a pass, the immigrants are the ones who end up suffering.

There should be no question that a country that turns its back on children for political gamesmanship is not the type of country any of us should be proud to call our own.