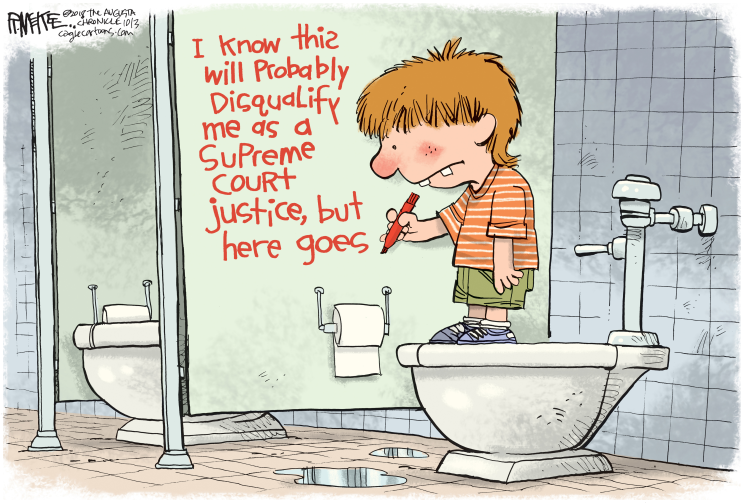 Just over a year ago, the Kavanaugh confirmation hearings got under way. They dropped a bomb on American social psychology and created a tectonic divide. And, as a book published this week suggests, their controversies were the result of a politically motivated hit campaign.

I have to admit that when President Trump picked Brett Kavanaugh to fill Anthony Kennedy’s seat on the high court, I wasn’t doing cartwheels. My choice was Amy Coney Barrett, the Notre Dame Law professor and federal judge who in 2017 had been accused of letting Catholic dogma “live loudly” in her. The way she handled that incredibly offensive line of questioning from California Senator Dianne Feinstein was a reflection of how she’d deal with people who think conservative female judges can’t separate their personal ideology from their constitutional obligations.

But if I couldn’t have Amy, Brett was a good substitute. As I watched the process unfold over a few weeks, my tepid support became rabid advocacy. I wrote articles in support of Kavanaugh’s nomination. I championed him on the radio. I wrote social post after social post arguing in favor of his confirmation. I did everything but try and unseat one of our Pennsylvania senators so I could cast a “yea” vote on his behalf.

It wasn’t because I became convinced overnight that Brett Kavanaugh was the finest person to be nominated to the Supreme Court since the late, great Antonin Scalia. It was because of my profound belief that if his nomination was derailed by what I saw as the #MeToo witch hunt and by allegations from Christine Blasey Ford, who struck me as confused, manipulated, and wholly out of her element, the concept of due process would become a sorry charade.

As part of that charade, two women confronted Arizona Senator Jeff Flake in an elevator to demand that he vote against Kavanaugh’s confirmation. I couldn’t bear, as a woman, to see these hysterical theatrics become the modus operandi of my gender.

I did not want the hashtag “#BelieveHer,” used to show solidarity with Blasey Ford, to justify claims about orgies, rape, and youthful bacchanals without further supporting evidence. As a woman who believes in the strength and resilience of my sisters, I did not want hazy allegations of incidents that might have occurred decades ago – two other women followed Blasey Ford in alleging acts of sexual misconduct dating back to the ’80s – to derail the nomination of a highly qualified judge. I did not want any of this, because it would mean that society had yielded to the pressures of some very loud women with an agenda.

That agenda is outlined by the National Law Journal’s Ryan Lovelace in his book Search and Destroy: Inside the Campaign Against Brett Kavanaugh, which was published Sept. 3. According to Lovelace, the women who orchestrated the attack on the nominee were motivated by a desire to undermine his ability to overturn Roe v. Wade. While they might have legitimately been concerned about sexual assault and harassment, Lovelace argues that their primary goal was to taint a pro-life judge, the fifth Catholic who would sit on the bench if confirmed. According to Lovelace, “[Christine Blasey Ford’s] audience was not the Senate … but the American people. If they could be persuaded that Justice Kavanaugh was a predator, then they might not accept a future ruling by the five Republican-appointed justices altering the right to obtain an abortion established by Roe v. Wade.”

After the election of Donald Trump, progressive women knitted their hats and started marching. They harnessed the anger they felt and turned it into movements like #Metoo and #TimesUp. But the irony is that the campaign was not based on strength but, rather, on a sense of victimization, of fear, and of retribution. We saw that chillingly in the death threats GOP Senator Susan Collins of Maine received after she, a self-described pro-choice woman, voted in favor of Kavanaugh’s confirmation.

That alone obligates us to remember the Great Witch Hunt of 2018, if only to make sure it never happens again.