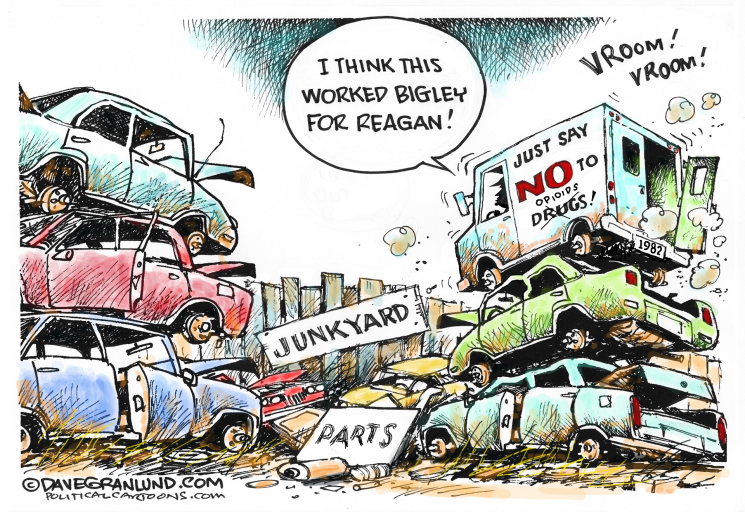 Philadelphia is one step closer to opening a Hotel Heroin in beautiful, downtown Kensington.

Those of us here in the suburbs will be able to just hop on the train and schedule a nice overnight stay in what promises to be attractive accommodations. Among the expected amenities will be clean, lighted areas where one can shoot up in peace, consultations with counselors and rehab specialists and, in the event that you get too carried away, plentiful Narcan to reverse the unfortunate but not totally unexpected overdose.

Of course, they haven’t yet broken ground on the facility. There are still a few wrinkles that need to be ironed out, including opposition from neighbors who already feel squeezed by the outdoor amenities set up in the streets, places where some visitors just set up shop by the curb and leave their needles and other baggage out in the open.

But last week, one big hurdle seemed to have been eliminated when U.S. District Judge Gerald McHugh ruled that the establishment of what is more commonly known as a “Safe Injection Site” does not violate federal law.

McHugh ruled that a law passed in 1986 to combat the crack crisis did not prevent the non-profit Safehouse from opening up a safe injection site. He noted that he did not have jurisdiction to deal with whether those sites were an appropriate solution for the opioid crisis, nor did he have authority to address the concerns of Kensington neighbors. His only job, he noted, was to determine whether the law prevented people from opening up an establishment where “visitors” can bring their own drugs and use them in the light of day. As I said, “Hotel Heroin.”

In a decision that seems motivated more by social engineering and wishful thinking than actual legal principle, the judge made us think he wanted to avoid dealing with social policy. He was not. This is the relevant portion of the 1986 law:

“It shall be unlawful to … manage or control any place … for the purposes of unlawfully manufacturing, storing, distributing or using controlled substances.”

There is no ambiguity in the statute: Congress clearly stated that it shall be illegal, unlawful and prohibited to open or maintain a facility where people are using drugs. That means shooting up. That means checking into Hotel Heroin with your little overnight bag and getting high. That means everything that Safehouse is intent upon doing.

According to McHugh, legislators in 1986 were trying to address the horrific urban crisis that swept the nation three decades ago that resulted in people dying in so-called “crack houses.” Many have criticized that law as being racist, because the vast majority of people using crack in the 1980s and 1990s were minorities, who bore the greatest legal and social burden of the federal controlled substance prohibitions.

But that is all irrelevant to this case. McHugh completely abdicated his obligation to interpret the law, and his legal decision ignores the clear language that states it shall be unlawful to manage a facility for the purpose of using controlled substances. It is hard to imagine how much clearer the statute needed to be.

It doesn’t matter that the idea of a safe injection site might not have occurred to the legislators in 1986. It doesn’t matter, from a legal perspective, whether the people who are advocating for these sites argue that they want to save lives (that’s debatable, but I suppose they are acting in good faith.)

Legislators pass laws. Judges interpret them, and are not supposed to wander off in their legal perorations toward some social utopia. McHugh’s decision is disastrous for those of us who still believe that the law actually means something, and that individual jurists are not mini-legislatures who can remake a statute to their own liking.

The Safehouse supporters and all of those opioid activists might have their hearts in the right place. I’m sure McHugh does, too. But if they are not willing to actually follow the law as written and honor the work of Congress, perhaps they might listen to another group of people with equally clear opinions, the Rolling Stones:

You can’t always get what you want. And Hotel Heroin is not what anyone needs.

Stay tuned for the appeal.