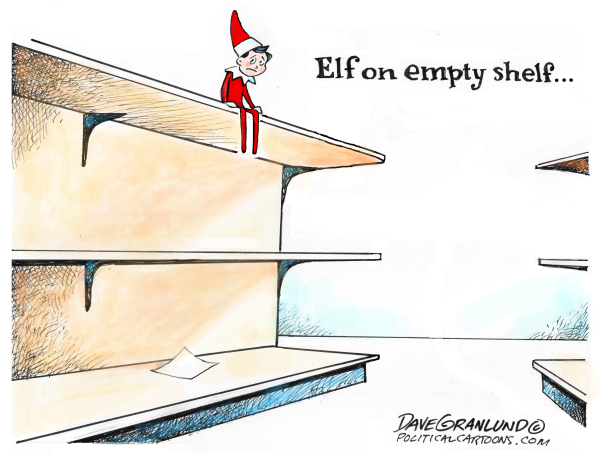 Some say they’re too over the top, some say it’s too early, and some say it’s not enough. I’m familiar with all of it, including the promises of “A Charlie Brown Christmas” with its haunting Vince Guaraldi score, the proliferation of Dickensian memorabilia and the magical, incandescent beauty of the late autumn, early winter daylight. It really is the most wonderful time of the year.

But the one thing I can’t snuggle up to is that Elf on the Shelf. As a child of the 1960s and 1970s, I had no idea that it was actually a “thing,” until I started seeing that grinning little imp showing up in all of my Facebook feeds.

The thing that bothered me the most is this elf looked “aware.” He had an expression that reminded me of the doll in that “Twilight Zone’ episode with Telly Zavalas, the one where she gets her revenge by “accidentally” showing up on the staircase and sending him hurtling to his death.

I did a little research and found out that the whole thing stems from a book that was published in 2004, authored by a mother-daughter team. Apparently, this elf is supposed to be Santa’s eyes. It moves around the house around Christmastime, reminding little kids that they need to be good, otherwise Santa’s secret Stasi doll is going to take names and convey them to the central authorities.

I know that you might be saying, well, what about that song “Santa Claus is Coming to Town,” where the most chilling passage is “He sees you when you’re sleeping/He knows when you’re awake/He knows if you’ve been bad or good/So be good for goodness sake.”

The difference is that in the song, it’s Santa who’s watching, not some pointy-toed little henchman. Santa is benign, and he’s the one making the toys and delivering the gifts so you kind of understand why he’d want to make sure that he’s not being overly generous to brats.

Having grown up during the Cold War and spending the first 30 years of my life with the shadow of the Iron Curtain just a continent away (particularly since we had relatives in Italy who literally were next door to Yugoslavia which was the most western of the Soviet Bloc countries but still a communist state), I got the whole principle of surveillance. It was a fact of life, and this was well before the Patriot Act became a homemade reality.

But we didn’t allow those things into our homes. Santa, if he was engaged in some covert operation, could be forgiven because he was a benign fellow who would probably still give you some toys even if you (as I) screwed around with your younger siblings because they really deserved it.

That elf is different. That elf is not bringing you toys. That elf is not someone with whom you could have a lifelong relationship. That elf is a poorly-dressed, miniature spy who came in from the cold and is going back there, along with any intel that he gathered about you biting the plastic heads off of your brothers’ green plastic army men (not that I know anyone who actually did that, mind you).

In short, that elf has no place in any home where children are considered beloved creatures and not comrades living under the yoke of parental oppression. Christmas is a time of cheer, not a time to peer, and I’m personally offended that this thing is now considered a beloved tradition by generations that didn’t think Charlie Brown, Rudolph or even that melting snowman were enough.

I suppose you could call me a bitter old lady who doesn’t understand that times change and that the Grinch of my youth was a heresy to my parents and grandparents, who had their own simpler traditions. But I really think that something has broken a little with this elf, this hostile little creature who exists to mandate compliance. It’s “you better watch out, you better not cry, you better not pout or we’ll send you to the gulag, that’s why.”

Then again, I might just have seen too many episodes of “The Twilight Zone."