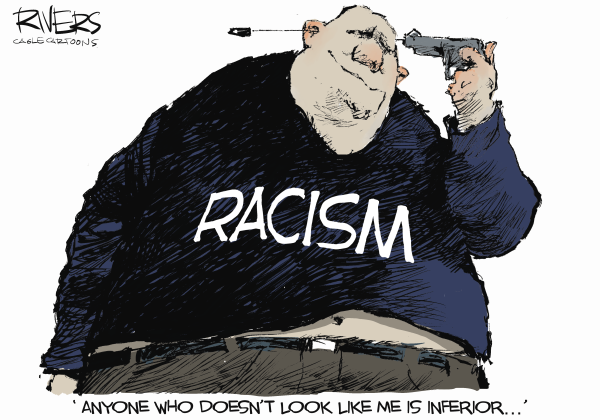 The shooter in Buffalo had a racist motive. He wanted to kill Black people. We don’t know exactly how he developed his hatred, but we know that it was the motivating factor in his rampage because it’s confirmed by his own words.

Beyond that, we know that this race hatred manifested itself in the most tragic form of loss for ten grieving families. These are the things that we know.

Unfortunately, a lot of people with shady motives have explained from their lofty media pulpits exactly how the Buffalo assassin became an avenging angel for the white race. Mind readers all, they have the same theory which undergirds their narrative, as if they’d all received the same explanatory email from some leftist university docent.

Here is how it goes: Tucker Carlson, newly dubbed “American Nationalist” by the New York Times, has fomented this race hatred with his highly rated cable news program on Fox. Critics argue the Fox News star has promoted something called “replacement theory,” which essentially holds that white Americans are being “replaced” by people of color.

That theory, which actually is bandied about on white supremacist websites and in the dark corners of the interwebs, is real. It is dangerous, it is toxic, and it has taken a deep foothold in certain segments of American society. It is also nothing new.

But the problem comes when you try and argue that this sort of hatred has become a mainstay of the conservative movement, which is exactly what the commentators alleged in the wake of the Buffalo massacre. NPR published an article entitled “How the Replacement Theory Went Mainstream on the Political Right.” In case the reader didn’t get the complete message, a picture of President Trump accompanied the article, which noted that “replacement theory began in white supremacist circles, but has since moved more mainstream on the political right in this country among many Republicans, explicitly or implicitly.”

I think we’re all a little tired of the guilt by association that has become common practice on the left when it comes to issues of racism. Any time there is the suggestion that a shooter has targeted his victims because of their race, religion or ethnicity, the angle for the media becomes “he was radicalized by Fox News.” They don’t even try and hide it anymore, with anchors on CNN and MSNBC literally calling out their “favorite” personalities by name. Tucker demonized brown people. Sean Hannity is a mouthpiece for Trump, who demonized brown people. Laura Ingraham hates brown people, as well as little trans kids and Heather’s two mommies.

President Biden has played into the whole conservatives are racist schtick with his coining of the phrase “Ultra Maga,” which conjures up visions of storm troopers in tactical gear waving Nazi flags while attending a CPAC conference. The pity is that he doesn’t need to do that, doesn’t need to exaggerate. There really are evil people who march in the streets and say things like “Jews will not replace us.” There are murderous thugs who did just that in Charlottesville, when Heather Heyer was massacred and the full measure of racism was on display.

Just as the terrorists who took down the Twin Towers are not representative of an entire religion, the philosophical extremists do not reflect an entire demographic of political thinkers. They don’t even represent one side of the political divide. The Buffalo assassin defined himself as a center-left, Fox News hating atheist who thought that the Republican Party was in league with corporations. He would not have been pulling the lever for Trump.

I grieve for the families who lost loved ones. I think that we can have legitimate discussions about gun laws and mental health laws and, yes, hate crime statutes. But I am personally sick and tired of being told that a young white man who murdered ten Black people is representative of me, and of those who think like me.

I refuse to believe that every Muslim wants to destroy America, and that every Black American wants to drive a car into a crowd where white grandmothers are dancing in joy and celebration. It’s time for a large part of those who stand on the other side of the political divide to extend that same human courtesy, and decency, to me.