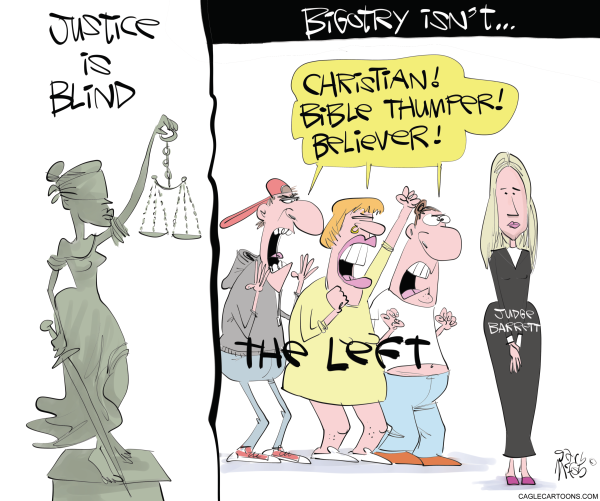 Whenever the Supreme Court comes down with a particularly momentous decision, it’s customary to look at the majority opinion. After all, the majority makes the law.

Sometimes, though, it’s the dissenting opinions that are more interesting, more shocking, more passionate and in a very small number of cases,
more influential.

John Marshall Harlan was nicknamed “The Great Dissenter” because he disagreed with so many of his court’s decisions during a storied lifetime on the bench. In some very important instances, his dissenting views became the basis of future majority opinions. The most famous example is the 7-1 majority in Plessy v. Ferguson, upholding the “separate but equal” standard used to support legal segregation. Harlan was the only holdout, writing in dissent that the Constitution was “color blind” and that “in this country, there is no superior, dominant ruling class of citizens.”

Then you have the dissenters who regularly file opinions that run counter to common sense, words that reflect a backward view of the constitution and a very personal animus toward certain groups, certain principles and certain perspectives. That’s why I wanted to focus on the dissents in a case handed down last week, because they carry very little of the wisdom and prescience found in Harlan’s work.

In Carson v. Makin, a majority composed of Chief Justice Roberts, along with Justices Samuel Alito, Clarence Thomas, Neil Gorsuch, Brett Kavanaugh and Amy Coney Barrett ruled that it was a violation of the Free Exercise Clause to deny public funds to parents who want to send their children to a religiously-affiliated secondary school. The controversy arose out of Maine, which had a program that provided money to parents who lived in school districts that didn’t have high schools. The taxpayer money was designed to allow these children to obtain the equivalent of a public education by attending private institutions of their choice. However, private sectarian schools were the only schools specifically excluded from the program.

Enter the dissenters. Justice Stephen Breyer penned a disingenuous opinion - joined by Justices Elena Kagan and Sonia Sotomayor - where he tries to gaslight us into thinking that he wants to “honor” religion by making sure he starves religious schools. In a particularly ironic passage, Breyer writes that “In my view, Maine’s [law] is also constitutional because it supports rather than undermines the Religion Clause’s goal of avoiding religious strife.” He then goes on to point out that people from minority faiths will feel annoyed if they think majority religions are being given an unfair advantage.

What Breyer ignores, and what Roberts makes clear, is that the citizens who are barred from using taxpayer money to go to the schools of their choice are the ones being discriminated against. They are equally justified in being upset that the state would penalize them because they choose to go to a religious school as opposed to another sort of private institution. And let’s be clear: this is not about public vs. private. This is about secular vs. religious, two very different things.

Justice Sotomayor wasn’t satisfied with joining his opinion. She had to weigh in with her own words, and they were choice.

In one particularly revelatory passage, where she sounds like Cassandra warning the Trojans about the Greeks hiding in that annoying horse, Sotomayor warns society at large of the evil lurking within the majority opinion: “[I]n just a few years, the Court has upended constitutional doctrine, shifting from a rule that permits States to decline to fund religious organizations to one that requires States in many circumstances to subsidize religious indoctrination with taxpayer dollars.”

You can feel the sneer in “religious indoctrination.” She continues: “Today, the Court leads us to a place where separation of church and state becomes a constitutional violation.”

Sotomayor’s is doing what the majority in Plessy did years ago, turn people of faith into second class citizens who don’t have a right to the same benefits that secular folk can claim. It’s really quite repugnant, but not surprising. Of late, Sonia’s been increasingly strident in her attacks on a society that doesn’t agree with her philosophically or politically.

The good news is that her dissent was joined by one person: her. It will not have the impact that Justice Harlan’s dissent in Plessy had, and although I can’t be sure, I suspect that future generations will look at her words as a desperate attempt to keep religion marginalized, behind a wall that exists only in the minds of the prejudiced and intolerant.