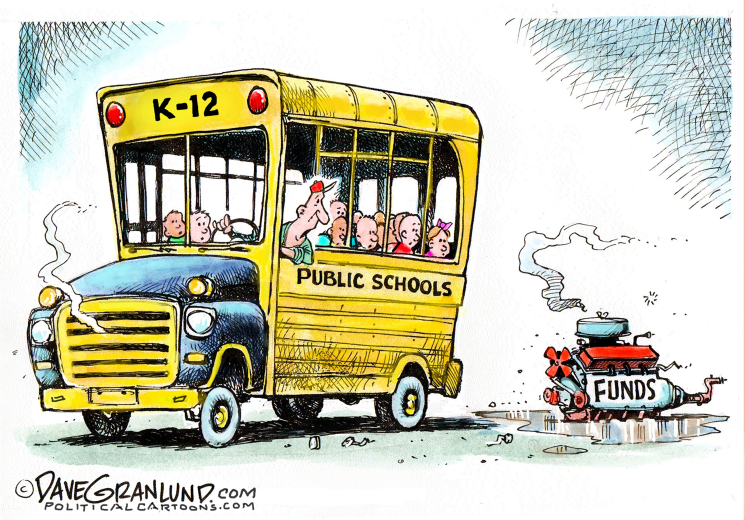 According to NBC News, a growing number of school districts (especially in rural areas) are experimenting with a four-day week.

In many cases, school boards can't raise the funds for competitive salaries and improvise by using the nontraditional schedule as a perk to attract and retain high-quality teachers. Applicants who would otherwise go for the biggest bucks appreciate having an extra day each week for preparing lesson plans, grading tests, taking "Meth-Head Parent As A Second Language" courses, etc.

(Other perks that were considered but ultimately put on the back burner included "Flunk a jock: we'll get you off with temporary insanity," "No more paying for school supplies out of your own pocket; our band geeks make a great distraction for snatch-and-run operations at Costco," "Whatever extracurricular club you're stuck with sponsoring, feel free to improvise! Did somebody say, 'mixed martial arts chess'?" and "Background check? Do you IDENTIFY as needing a background check?")

Students and teachers seem to respond enthusiastically to the new schedules, but parents who work Monday-Friday lose sleep worrying over (a) affordable daycare for their younger children and (b) unsupervised mischief by their older offspring. ("This is Mrs. Brown on Second Avenue. I'd like to report a kitten in the top of the big oak tree. But it IS a matter for 9-1-1! The kitten is on the hood of a police car!")

Of course, states still require a certain number of classroom hours per school year, so the remaining four days must be lengthened. With students already running a sleep deficit, this could really change the nature of the forbidden public displays of affection. ("Awww... she's tucking him into his locker for a nap. Aren't they the cutest couple?")

Yes, longer days and final period can be a real recipe for disaster. ("No, that's not an example of a dangling participle. Looks more like a dangling thumb! Did you just come from dissecting frogs, Ethan?")

At least the real estate market will benefit from a four-day schedule. ("You say your 16-year-old will be spending the extra day off studying hard and feeding the homeless? I've got a real deal on oceanfront property in Arizona... ")

And our carbon footprint will decrease as more homeowners turn out the lights and hide from students who have an extra day for selling fundraiser magazines, cookie dough, detergent...

NBC didn't say anything about how chopping off one day of work a week will affect cafeteria staff, custodians, student resource officers and bus drivers. ("We board members need to reach out to these valued employees. I wonder at which marina they dock their yachts?")

The network was also silent about school bullies. Can you imagine the stress level of trying to squeeze five days' worth of lunch money out of four measly days?

Studies on the overall effects of a four-day school week are still inconclusive. But it may be a moot point, anyway. If a four-day week gets taken for granted as the new normal, school districts will have to compete even more ferociously.

("School week? Who, us? We like to think of the academic year as a series of 'teachable moments'. Pass out the fortune cookies, require two chin-ups, let the traffic cameras snap the class photos and reserve singing the 'Alma Mater' for the shower. Someday, your students will tell their Japanese bosses all about it.")