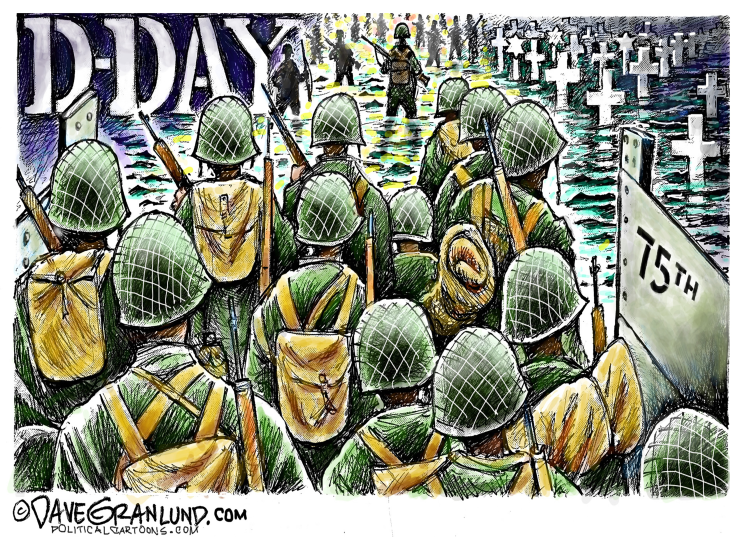 Twenty years ago this June, when my father's youngest sister Gwendol passed away, I glanced over at dad during the funeral and thought, "He looks as if he has the weight of the world on his shoulders."

If my late father bore such a metaphorical burden from one loss, just think how much more pressure was on Gen. Dwight D. Eisenhower 75 years ago. As supreme commander of Allied forces in Western Europe, he alone had the authority for launching or scrapping the invasion of Nazi-occupied territory on June 6, 1944.

"Ike" (who was chain-smoking 60 filterless cigarettes a day by this time) knew that the Allied hush-hush Operation Overlord would veer toward one of two extremes: either it would be the beginning of the end of Adolf Hitler's stranglehold on Western Europe, or it would be a catastrophe forever eclipsing the infamy of Custer's Last Stand.Eisenhower had already committed himself to doling out credit for success or accepting responsibility for failure.

Although many younger Americans may possess only the vaguest understanding of the Normandy invasion ("Was that when French rock-and-rollers debuted in the U.S.?"), a combination of valor, strategy, ingenuity, "melting pot" cooperation, home front sacrifice and prayer helped free the world from the self-styled Master Race.

Historical and cultural milestones are flying past us almost as fast as machine-gun bullets, but I hope we can slow down long enough to savor the significance of the 75th anniversary of D-Day.

How do you plan to mark the event?

If you're a reader, I highly recommend Alex Kershaw's brand-new book, "The First Wave: The D-Day Warriors Who Led the Way to Victory in World War II."It's a genuine page-turner, with vivid details of the obstacles and inspirations surrounding the heroes who risked their lives in a military campaign of unprecedented scale.

Do you enjoy listening more than reading? If you Google "Complete broadcast day D-Day," you'll be led to the Internet Archive's free recordings of the CBS and NBC coverage of the invasion. You may have assumed that such broadcasts were lost in the ether; but, yes, you can actually stream or download the tentative network news reports (designated in "Eastern War Time"), analyses and speeches that anxious Americans listened to between their soap operas and swing music.

Do you prefer a more interactive role? If you were alive during World War II (whether toting a rifle through the jungle or collecting tin cans for a scrap drive), break out your scrapbooks and share stories with your family. Again. Even if they have other things to do. Someday they'll appreciate your insights.

Spend some time talking to a veteran (whether of World War II or another conflict). I'm sorry I never knew my wife's great-uncle, George Eayre. He lived until 1968 but could have died decades earlier; on D-Day, after the smoke cleared, there wasn't another American left standing on his section of the beach.

Hug some active military personnel. They're VOLUNTARILY putting themselves in danger for goals often a lot less clear than Ike's.

If nothing else, do some contemplation on June 6.

If our 24-hour news cycle and steady stream of self-serving leaks had existed in 1944, Hitler's Third Reich would probably now rule every continent. Let that sink in.

Political and media leaders, the weight of the world is now on YOUR shoulders.