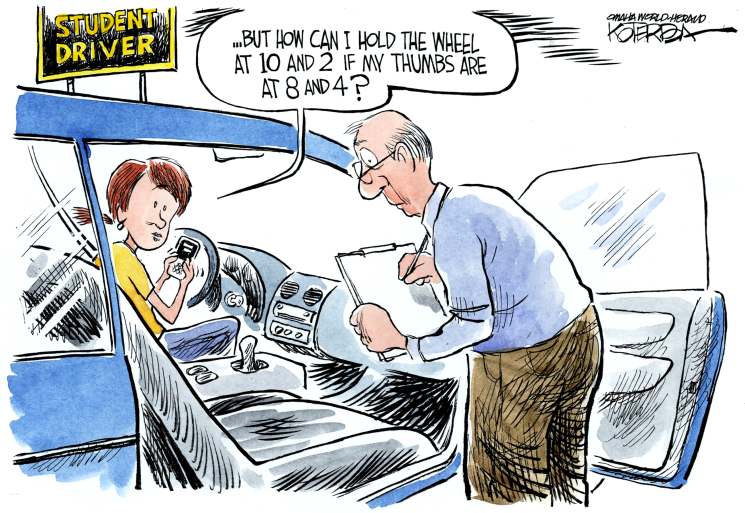 Some people never break the posted speed limit, they gingerly seal it in bubble wrap.

While lead-footed daredevils announce, "Put the pedal to the metal," the contrasting lost-in-their-own-little-world "helium-footed" motorists chant the mantra "Do not violate the pedal's personal space."

Honestly, I don't hate anyone in the whole world, but I can empathize with frustrated motorists who post essays declaring "I Hate Slow Drivers."

Most of the writers are kvetching about slowpokes who take up permanent residency in the passing lane of an interstate highway, but I have encountered more than enough sightseers impeding commuters along country roads.

I know some people like to show up "fashionably late," but if you're so slow that you arrive wearing fashions from the previous decade...

Perhaps timid drivers stay well below the speeds recommended by safety engineers because they think it's a trap. They envision the engineers sadistically waiting for vehicles traveling 55 miles per hour in a 55 zone to vibrate to pieces. ("Look! They're burning up on reentry into Podunk. Sweet.")

Nervous Nellies act out a "Wayne's World" "We're not worthy!" routine when told they have permission to reach a certain speed. They probably also cut the penny in half when instructed "Take a penny, leave a penny" and meekly ask the "free samples" staffer at the supermarket, "Might I just take the toothpick instead of the bacon-wrapped cocktail wienie?"

If challenged on their habits, the more self-centered slowpokes get defensive and mutter, "Well, if the speed demons behind me were in such an all-fired hurry, I guess they should have started 10 minutes sooner," while clearing a place in the glove compartment for their Folksy Humorist of the Year award. These are the blame-the-victim jerks who think Lee Harvey Oswald should never have been arrested. ("If JFK had arrived in Dallas 10 days before the motorcade, none of this unseemly mess would have happened.")

Slowpokes view themselves as exemplars of safe driving, but they don't recognize when excess becomes wretched. They think driving 10 miles an hour slower than the legal limit is their obligation to mankind, even if they have new tires, new brakes, perfect weather, perfect visibility, a newly paved road and their GUARDIAN ANGEL visibly riding shotgun. ("Every time a horn honks, an angel gets the finger.")

Some daydreaming dawdlers eventually pull over just long enough for the procession behind them to get up to speed. I always give them a smile and a wave for their consideration; but I'm still leery of the guy who motions for me to pass him on a blind curve. (Didn't I see him on "The Twilight Zone"?)

Don't assume this is an ageist rant. I've seen drivers from all generations behave badly. On the other hand, I HAVE gotten a good look at a lot of bumper stickers that read, "God created Adam and Eve, not Adam and Steve - and I know because I was on their bowling team."

When struggling to get to work on time, I've learned to accept reality, roll with the punches, take a deep breath and go to my Happy Place. Of course, I must always imagine myself going to my Happy Place via HIKING BOOTS.

I always tell myself that it could be worse: instead of blocking traffic, the jerks could be PARKING on the roadside and producing the next generation of idiots.