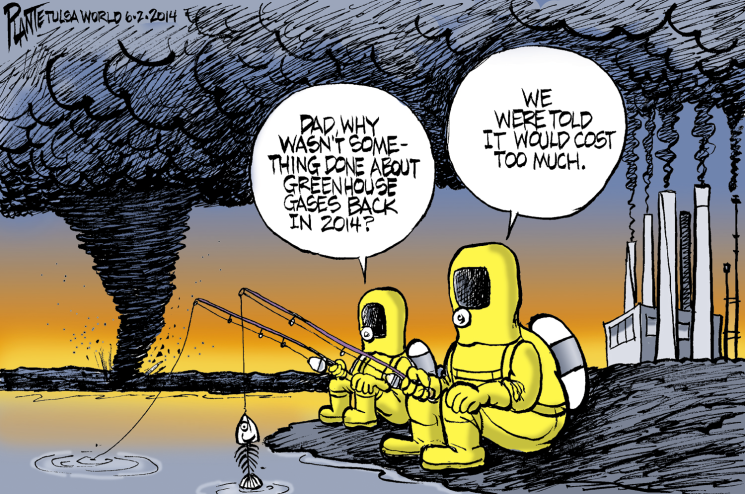 On a Sunday afternoon fishing trip with my little brother and late father, I caught 15 fish at the lake in Lewisburg, Tennessee.

(Yes, the number 15 has stuck in my memory for 49 years. Oddly enough, 15 is the same number of minutes it now takes me to remember why I entered a room.)

Although my son caught a minnow or two in my brother’s backyard creek a few years ago, I have had only one real fishing excursion since that personal-best day in 1970.

(Non-aquatic) Life got in the way.

My experience is hardly unique, judging by a Wall Street Journal article titled “Does Fishing Have A Future?”

According to the U.S. Fish and Wildlife Service (motto: “YOU say ‘shutdown of nonessential government services’; I say, ‘Herds of caribou and elk mysteriously stampeding through fashionable D.C. restaurants'”), the number of Americans who at least dabble in fishing has grown in recent years, but the TOTAL DAYS FISHED has dropped alarmingly.

Organizations such as the Recreational Boating and Fishing Foundation are striving mightily to (a) keep youngsters motivated to fish as they enter their teen and adult years, (b) lure former anglers back into the hobby and (c) make fishing more alluring to women and minorities.

I wish the volunteers well. I know many people are yearning for “Andy and Opie” fishing-hole adventures, and that they romanticize the Good Old Days when whole families fished together. But tradition-sharing nuclear families are endangered, and Mom’s Latest Boyfriend usually has a shorter expiration date than the WORM.

Yes, I support the educational programs that encourage fishing; but I do so with gritted teeth, because I know it’s part and parcel of the tiresome “make the kids put down their electronic devices and commune with nature” guilt trip that so many codgers (and codger wannabes) espouse nowadays.

I mean, isn’t it a little ironic that do-gooders can see youngsters on the verge of driving and dating and badger them with “Nooooooo – get in touch with NATURE. Don’t mess with that ‘birds and bees’ stuff”?

Multi-generational bonding is all well and good, but kids are being encouraged to drag retiree grandpa out of his easy chair when the only “catch and release” grandpa wants to do involves catching 40 winks and releasing something that is initiated with a mirthful plea to “pull my finger.”

Let’s face it: the different selling points of fishing actually work against each other. On the one hand, fishing is touted as a laid-back, peaceful pastime. But high schools and colleges are rushing to organize COMPETITIVE FISHING TEAMS. (“Okay, use the fish bladders as stress-relief balls if you must; but you’re running laps in the lake if your arch-rival doesn’t get a few accidental *wink wink* concussions from your trout.”)

I always get a special feeling when I eat fish, because I know Jesus cooked fish for his apostles (at least four of whom were literal fishermen). But, in these hyper-sensitive times, Christianity’s ties to fishing may just derail the fledgling revival.

“SINKERS and FLOATS? That’s some seriously judgmental, triggering imagery you’ve got there. And fish travel in SCHOOLS? Well, as long as they celebrate Winter Holiday and That Guy Who Did Good Deeds for No Particular Reason and Is Remembered on February 14 Day… ”