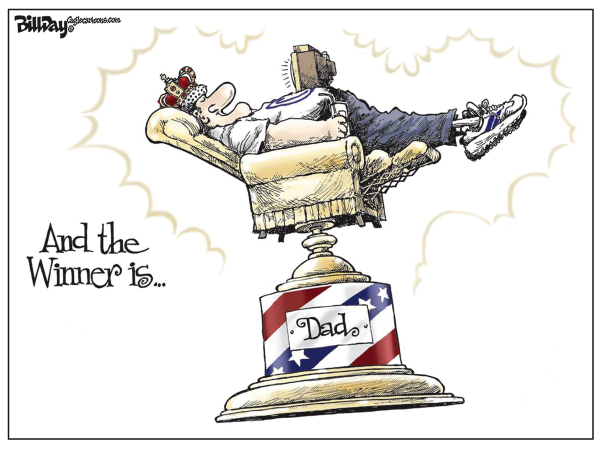 My new supervisor anticipates being a first-time father in a few months.

I hope he doesn’t become one of THOSE fathers.

Most fathers take a laidback, minimalist approach. But a few are overly competitive about being cool, outshining mom or presenting a perfect-parent image to their peers. (“Yeah, I’m keeping up with the Joneses – using my Army surplus helicopter-parent HELICOPTER. Run, Joneses, run!”)

Whether they feel disrespected (Americans spend only half as much on Father’s Day as on Mother’s Day) or view a “World’s Greatest Dad” mug with the attitude “I’m not accepting anything unless I EARN it,” they tend to be alarmingly overachieving.

Surely, they’re not just wrangling for luxury Father’s Day gifts. For instance, the $700 vacuum that uses a green laser to “detect all the bits of dust you might otherwise leave behind.” How does such prissiness wind up in the same sentence with “Father’s Day”? The vacuum should have an attachment to detect all the microscopic shards of the dads’ MANHOOD that they’ve left behind! Real dads simply need a sensor that lets them know when a mass of dirty gym socks will no longer fit through the door.

Overly competitive dads even try to rig the game of “baby’s first word.” They cajole the infants with promises such as “Say ‘da-da’ instead of ‘ma-ma’ and good ol’ noncustodial Dad will say, ‘Trophy wife, learn to lactate.’”

These showoff fathers tell their offspring things like, “The good news is, I’ve secretly finished your new treehouse. The BETTER news is, I’m sure you’ll have no trouble making new friends at the school closest to Sequoia National Park.”
They fib, “I’ve ALWAYS wanted to measure the equator with my necktie collection…”

Aggressive patriarchs crave every ounce of credit they’re due. They confide in their kiddos, “Don’t tell your mother, but I’ve been funneling money to the North Pole so Saint Nick can afford your gifts, even with his gambling habit. True, the Tooth Fairy is self-funding; but remember it’s Daddy who stands guard to make sure the little perv doesn’t confiscate any still-attached teeth.”

You know a dad is trying extra hard when he beams, “Someday all of this will be yours,” and he’s NOT referring to something that will require buying out Sherwin-Williams, putting a mechanic’s triplets through college or forcing Goodwill to take the junk at gunpoint.

Attention-hogging fathers are only too glad to explain “the facts of life,” as long as they can mix in a few other lessons. (“Okay, the birds and the bees. First, stand your ground with the intruder at the door. Then, the bees will pollinate the flowers on his grave and the birds will decorate the monument…”)

Fathers need to acknowledge the passage of time. It’s okay to give piggyback rides to your children and their friends, but when you reach the point of your heir whining, “Daaad, we’d rather call an Uber to take us to the Drake concert,” it’s probably time to taper off.

Experts warn, it’s a social faux pas when you try to turn your daughter’s moment in the spotlight into the MIXED MARTIAL ARTS father-daughter dance.

Just love your kids, dads. Spend time with them. Although…throwing in that bonus kidney COULD make the boxes of marching band candy sell better than the Girl Scout cookies that Helen in Accounting is trying to unload…