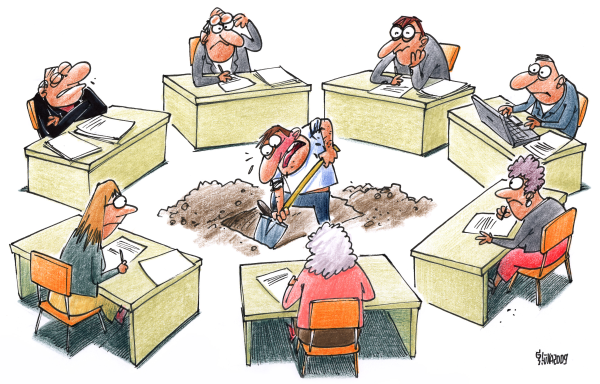 As a longtime fan of Monty Python’s “Ministry of Silly Walks” sketch, I feel compelled to say a few words on behalf of much-maligned bureaucrats everywhere.

Consider the adjectives that get recycled ad nauseum when bureaucrats are mentioned: “faceless,” “unelected,” “anonymous”…

(Sadly, the upbeat experimental slogan “Administrate like no one is watching” ran into obvious accountability problems.)

I don’t know which department, bureau, board, agency, council or watchdog to ask, but there must be statistics on the average age at which people decided it’s their life’s destiny to become a red tape wrangler. You certainly don’t see lots of bureaucrat wannabes among the preschoolers who intend to be cowboys, astronauts, ballerinas or rock stars.

It takes a lot of grit to approach a career in a bureaucracy. Consider the word most associated with the administrative state as a whole: “bloated.” You don’t hear many jobseekers saying, “I want to work in a pharmacy – as long as it’s a gaseous pharmacy” or “I want to be a bounty-hunter, as long as having hot flashes is one of the benefits!”

Society tries to dehumanize bureaucrats, but every one of them is someone’s child, parent, spouse, sibling or neighbor. One good data breach and you would know all that.

Bureaucrats are individuals. No matter how much the system tries to grind them down, many are passionate about making the world a better place. They persevere, even though breaking a sweat might get their forehead declared an endangered wetland.

Bureaucrats have hopes and dreams, just like retailers, factory workers and retirees. They have nightmares, too! Like the one about Freddy Krueger slashing their budget to only 105 percent of what it was last year.

It doesn’t usually boil over into physical violence, but there is a palpable tension between bureaucrats and the rest of the public. Understaffed cubicle occupants are quick to tell you, “I could be making more in private industry. Well, not in any of the private industries I regulated out of business, but one of the other ones.”

Non-bureaucrats, possessing less job security, have learned to roll with the punches and proclaim, “When one door closes, another one opens.” Not to be confused with the bureaucratic motto “When one window closes, quick – close all the rest of them!”

When I told one of my bureaucrat friends about this week’s topic and the need to remind the public of bureaucrats’ positive impact on product safety, the environment and international trade, he exulted, “You’ve hit the nail right on the head!”

Fearing his supervisor, he quickly added, “Unfortunately, you used a hammer that passed only the outdated 39-page list of specifications. This year’s 43-page list, however, is downright effervescent…Hey, lay that hammer down! Don’t make me faceless!”