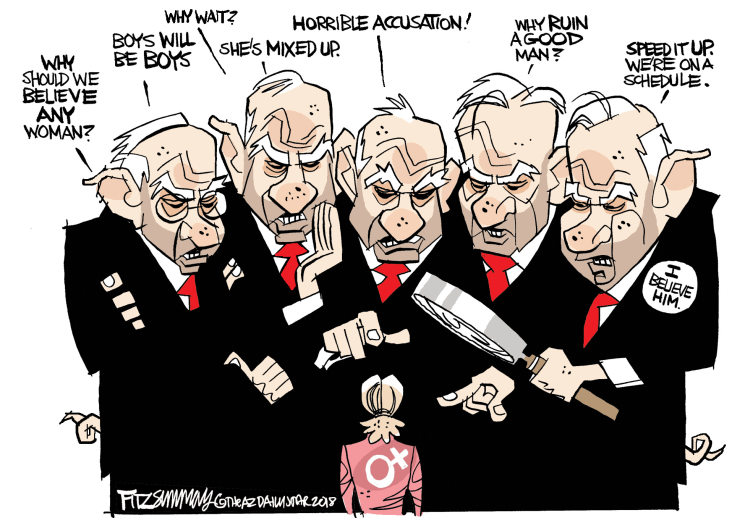 Why are Republicans so determined to stick with Supreme Court nominee Brett Kavanagh, soiling themselves in the process and alienating as many women voters as possible?

I see three reasons: Donald Trump views Kavanaugh as survival insurance (given his past writings), Trump is loathe to admit defeat, and the party's aggrieved white men apparently believe in all sincerity that the female of the species is bent on destroying them, and thus must be fought at all costs.

Dumping Kavanaugh at this point, now that a credible second woman has come forward, should be a no-brainer. There are plenty of prospective judges in the Federalist Society factory who'd be willing to overturn Roe v. Wade. But that would mean starting from scratch, with new hearings and new social calls on Capitol Hill, and the Republicans don't want to stretch the timetable past the midterm elections. Especially if Democrats were to recapture the Senate (which is possible, but not probable).

Republicans know they'd look bad if they tried to hustle a new ideologue onto the high court during the post-election lame-duck session. On the other hand, they don't seem to care much about looking bad. Their current behavior makes that perfectly clear.

What a freak show they've been conducting. They've been trying to rush the confirmation process - denying Christine Blasey Ford the courtesy of an FBI review (which Anita Hill was accorded), refusing to schedule additional testimony (and considering Brett pal Mark Judge's misogynist track record, no wonder) - because they wanted to minimize the risk of more horrific revelations. Indeed, according to The New Yorker, some Senate Republican staffers knew last week about Deborah Ramirez, the Yale classmate who now says that Kavanaugh waved his penis in her face. Nevertheless, in the words of Mitch McConnell, Republicans intend to "plow right through."

And their attitude is best illustrated by the Ed Whelan sideshow, a classic case of right-wing character assassination.

Whelan, a longtime conservative operative and pal of Kavanaugh's, announced that Ford may have been attacked by someone who merely looked like Kavanaugh - an innocent person with no links to the incident he identified publicly. Meanwhile, a right-wing public relations firm known as CRC hyped Whelan's fake news.

When the whole farce blew up in Whelan's face, he abjectly apologized. Then Garrett Ventry, a spokesman for the Senate Judiciary Committee (actually, a CRC employee on loan to the committee) rushed out a statement that the panel "had no knowledge or involvement" in Whelan's scheme. After that, Ventry resigned from the committee, because he has been accused of... wait for it... sexual harassment.

I've written in the past that the GOP's behavior in the Kavanaugh affair seems almost calculated to widen the gender gap and drive more women voters into the midterm Democratic camp. Now we're starting to see the evidence. A new USA Today poll says only 31 percent of Americans support Kavanaugh's confirmation, a new low, and that the hostility is driven by women voters, who now oppose him by a nearly 2-1 margin (23 percent yes, 43 percent no). Other recent polls find a similar pattern.

It's doubtful that Trump did his nominee much good by tweeting that if Ford's teenage allegation was real, she would've promptly reported it to the police. White House aides had reportedly hoped that Trump would duct-tape his fingers and stay out of the fray, but alas, he could not resist. Surely there are still some women left to alienate. He says now that he's standing with Kavanaugh "all the way."

And assuming that he and the misogynistic Republicans hold firm in the days ahead, it's doubtful that Andrew Puzder's outburst will help. You may remember Puzder; he was briefly Trump's Labor secretary nominee. On Saturday, he lamented in a tweet that Ford's sexual assault allegation was evidence that " nothing is sacred in the Left's pursuit of power." He omitted the fact that his ex-wife accused him of domestic violence - which she described years ago on national TV while wearing a disguise to protect her identity.

How can Kavanaugh possibly lose when he's defended by the best people?

Dick Polman is the national political columnist at WHYY in Philadelphia and a "Writer in Residence" at the University of Pennsylvania. Email him at dickpol[email protected]