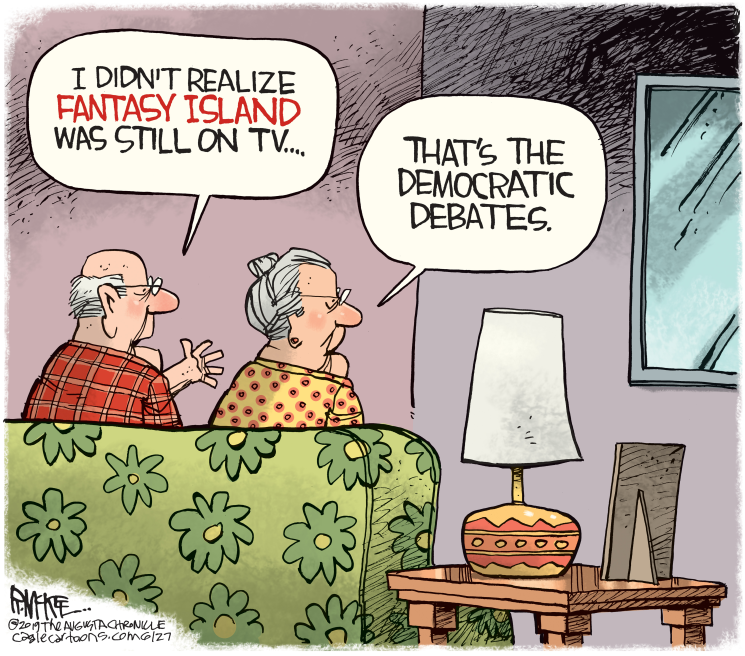 Is it possible to pluck one newsworthy moment from Wednesday night's cacophonous 10-contestant Democratic quiz show? You bet. Here we go:

Moderator Lester Holt asked, "Who here would abolish their private health insurance in favor of a government-run plan? Just a show of hands."

Uh oh. Warren is a solidly top-tier candidate, with a decent shot at winning the nomination, but, politically speaking, I seriously question whether someone who wants to abolish the private health care of 180 million Americans can actually win a general election.

Warren was the sole candidate on stage who's polling in double digits, crowding Bernie Sanders for second place behind Joe Biden. Her words counted the most. She was also the sole person on stage (except for one-percent candidate Bill de Blasio) who called for the abolition of private health insurance - a stance she hadn't articulated on the campaign trail.

"Look at the business model of an insurance company. It's to bring in as many dollars as they can in premiums and to pay out as few dollars as possible for your health care. That leaves families with rising premiums, rising co-pays, and fighting with insurance companies to try to get the health care that their doctors say that they and their children need. 'Medicare for all' solves that problem," Warren said.

Her stance may enhance her nomination prospects,within a party that has moved leftward since 2016. Most grassroots Democrats likely won't fault her critique of the private insurance companies, and lots of centrist swing voters with private coverage have their own complaints about the status quo system.

But in politics, you don't necessarily win awards for great intentions, or for articulating the most rational arguments. Warren conceded that there are "political reasons" for not supporting government health care, but she didn't say what they are.

A landslide majority of Americans like their private health coverage, and they don't want it taken away. Indeed, voters in general don't like it when politicians try to take something away.

Granted, most Americans reportedly support the nebulous concept of "Medicare for all," but as soon as they're confronted with caveats, it's a different story. According to the nonpartisan Kaiser Tracking Poll, "Medicare for all" gets a thumbs-up rating, 56 to 42 percent. But when Americans are told that the program could eliminate private health insurance - as Bernie Sanders' agenda envisions, phasing out private coverage within four years - most people run for the hills. The numbers are suddenly reversed: 37 percent yes, 58 percent no.

Imagine what Trump and the Republicans would do with that, if Warren or Sanders were nominated. And on this issue, they wouldn't even need to lie. Warren is confident about her powers of persuasion, but it's hard to foresee her winning the argument for government health care. Fairly or not, "socialism" is a word that's easy to demagogue, and Americans (especially those 45 and older, the most reliable voters) simply don't like the word. They may be blind to the socialistic initiatives that they've long enjoyed (from Social Security to the interstate highway system), but that's just political reality. Which is why candidate Kamala Harris has walked back her early support for abolishing private health insurance.

Amy Klobuchar, who has gotten little traction in the race thus far, said on stage Wednesday night: "I am just simply concerned about kicking half of America off of their health insurance in four years."

For the Trump campaign and the GOP, that's the perfect video clip - an acknowledgment, from a Democrat, that Warren would imperil "half of America." And Joe Biden's campaign is drawing a sharp contrast with Warren, endorsing the more incremental approach to health reform. In a statement, it said: "The Biden administration will give every American the right to choose a public option like Medicare." (Clever use of "right to choose.")

So we did get some clarity last night, at least on the top-tier issue of health care: government coverage versus incremental reform. Should the Democrats go boldly leftward, or practice prudent moderation?

Elizabeth Warren wowed the liberal base, but she may have teed up the GOP's top attack ad and rendered herself less electable.