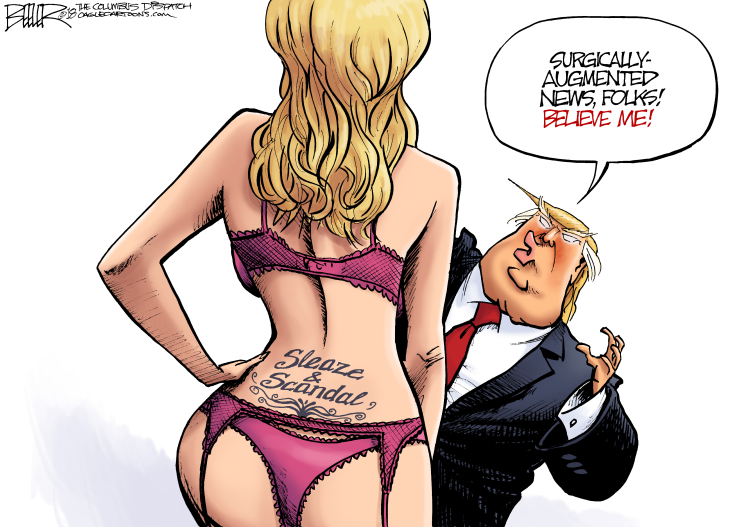 In a normal universe, a vivid allegation of rape, leveled at a serially misogynist president, would be a news story worthy of 24/7 coverage. Heck, it would even be bigger than the recent feeding frenzy about Joe Biden touching some women's shoulders.

But naturally, the details offered on Friday by New York writer E. Jean Carroll - that Donald Trump, in his previous incarnation as a real estate hustler, banged her head against a wall and forcibly penetrated her in a department store dressing room - sputtered in the news cycle. It was barely mentioned on the Sunday morning TV shows. It didn't make the front page of the New York Times, Wall Street Journal, Los Angeles Times, or the Chicago Tribune. On Saturday, 164 stories were featured on the New York Times' online home page, but there were none about Carroll, a well-regarded advice columnist for Elle magazine, who is now the 22nd woman to accuse Trump of sexual misconduct.

That latter fact is crucial. Many Americans - or, more precisely, many in the media - are so benumbed by Trump, so fatigued by the daily evidence of his amorality, that even the freshest, most sickening accusation is treated as "old" news.

But Carroll's allegation, featured in a new book (confirmed by two Carroll friends who were told of the incident at the time) - and, most importantly, Trump's response to her allegation - warrants major coverage, because this story, when placed in its proper context, tells the tragic truth about the numbing of America.

Here's context: Jill Harth, Kristin Anderson, Lisa Boyne, Temple Taggart, Mariah Billado, Cathy Heller, Karina Virginia, Natasha Stoynoff, Rachel Crooks, Mindy McGillivray, Jennifer Murphy, Jessica Drake, Ninni Laaksonen, Summer Zervos, Cassandra Searles, Alva Johnson, Juliet Huddy, Jessica Leeds. Those are just some of the women who have accused Trump of sexual misconduct. That list does not include the beauty pageant women who said that Trump barged into their dressing rooms. He has assailed all these women as liars. In 2016, he threatened to retaliate by suing them, but never did. He claimed that some were getting paid to smear him, but never tried to prove it.

This context makes Carroll's story more important, not less. It's arguably the most serious accusation of all, because it's about rape, not groping. Conservative attorney George Conway (husband of Kellyanne) points out: "Carroll's account is supported by the sheer number of claims that have now surfaced against Trump - claims in which women have accused Trump of engaging in unwelcome or forcible sexual conduct or assault against them." Indeed, Conway writes, "what Trump described in the (Hollywood Access) video is exactly what Carroll says he did to her."

Fortunately, Trump has done his best to feed the sputtering news cycle by lying anew. When he denied the rape allegation, he said: "I've never met this person in my life... I have no idea who this woman is." Which was amusing to hear, because Carroll's article, posted on the New York magazine's website, includes a photo that shows Trump talking with Carroll at a party.

He also claimed that Carroll concocted a fiction "to sell a new book." Actually, that's what he did, via his ghostwriter, when he concocted the fiction that he was a business genius. That's his sole frame of reference. He thinks that everyone else is just like him - blatantly lying for the sole purpose of hyping themselves.

Will this rape allegation move the public opinion needle? Of course not.

But that doesn't mean this story should slide into the void. It's too important. It shows how numb we've become. It exposes anew the hypocrisy of the Republicans and evangelical leaders who have greeted the story with silence - the same people who once championed "character" and "morality" in our highest office. And it shows, once again, that more than 40 percent of the electorate will reject any and all accusations, not matter how serious, because they perceive that Trump alone is the font of truth.

If this story, placed in its broader context, is allowed to fade away, this nation will have forfeited another slice of its soul.