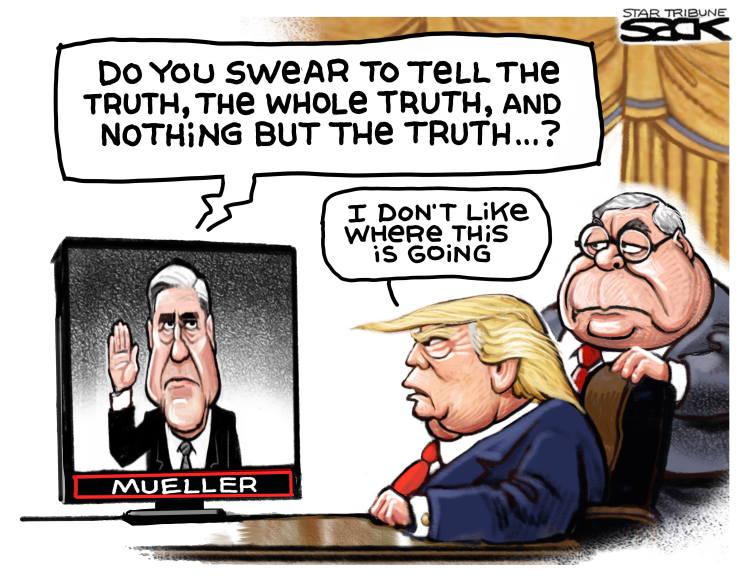 Remember the now-distant days when we Americans who closely track Donald Trump's lies and lawlessness waited in great anticipation for "Mueller Time"?

That historic reckoning seemed virtually assured - until Trump's servile attorney general, Bill Barr, falsely spun the Mueller report as a total exoneration of his client. Barr's bumper-sticker mantra, amplified by his client's relentless tweets, infested the mainstream media bloodstream and struck a chord with a public that hasn't bothered to read the densely circumlocutions report.

So it's quite possible that Robert Mueller's long-awaited open testimony, slated for Wednesday in front of the House Judiciary and Intelligence committees, will be a yawner. Indeed, he recently warned that "the report is my testimony." But key House Democrats believe (or hope) that if the special counsel merely recites the most crucial passages on TV, that he will somehow bring the report to life and seed more grassroots support for impeachment.

If that were to happen, fine. But it's a sad commentary on our attention-deficit, sub-literate culture that the powerful substance of the Mueller report has not sufficiently resonated. Only three percent of Americans have reportedly read the entire thing, and only 10 percent say they've read some of it.

If Mueller's public testimony moves the needle, fine. But legal experts with federal prosecutorial experience know already how damning it is - regardless of whether Mueller remains characteristically reticent under questioning.

Donald Ayer, a former assistant U.S. attorney and a deputy attorney general under George H. W. Bush, calls it "a very readable account of repeated acts by the president carefully tailored to interfere with and disrupt (Mueller's) investigation." Mimi Rocah, another former assistant U.S. attorney, says the report amasses "an overwhelming amount of incriminating information" that documents how Trump "engaged in obstruction of justice by repeatedly trying to dissuade witnesses from cooperating or testifying, using threats and intimidation" - and she points out (as have more than 1000 current and former prosecutors) that if not for a Justice Department memo that argues against indicting a sitting president, obstruction charges were likely justified.

Indeed, those current and former prosecutors write in their open letter: "To look at these facts and say that a prosecutor could not probably sustain a conviction for obstruction of justice - the standard set out in Principles of Federal Prosecution - runs counter to logic and our experience."

There's certainly fertile ground for substantive questions. House Democrats, most notably Judiciary Chairman Nadler, would ideally love to hear Mueller endorse the obstruction angle - in colloquial, everyday language. They will surely ask him whether he, as an experienced professional prosecutor, believes that Trump committed obstruction-of-justice crimes, as determined by the weight of the evidence, even though Trump, as a sitting president, cannot be criminally charged.

Will Mueller elaborate on his report and answer that question in the affirmative? Yeah, right. And the 2019 Phillies will rally to win the National League East.

So if Mueller won't bite on whether Trump should be criminally charged, Judiciary Democrats will surely ask him to elaborate on the remedy he offered in his report: "The Constitution requires a process other than the criminal justice system to formally accuse a sitting president of wrongdoing." Well, the only other process is impeachment. Does Mueller believe that the evidence he amassed meets the threshold for an impeachment probe of high crimes and misdemeanors?

Could Mueller answer in the affirmative? Yeah, right. And unicorns will gambol on the National Mall.

Excuse me for trying to lower expectations, but Mueller is not likely to break character and deliver an indelible Hollywood moment. In fact, when the news broke that his testimony was being pushed back one week, because House committee Democrats wanted to ensure that their junior members would have the chance to speak, the odds of another Democratic muck-up increased. Expect repetitive questions badly framed within a five-minute window, all while preening for the cameras.

Perhaps Mueller's mere appearance on live TV will dominate the news cycle for a day, and remind enough potential 2020 voters that our Russia-enabled president is soaked in corruption ,' regardless of whether Mueller does little more than read aloud from what he has written. But if "Mueller Time" lays an egg, I'll be reminded of an old Peanuts cartoon, circa 1968, when Charlie Brown laments, "What a team. We can't even win enough games to have a slump!"

He could easily have been talking about the Democrats.