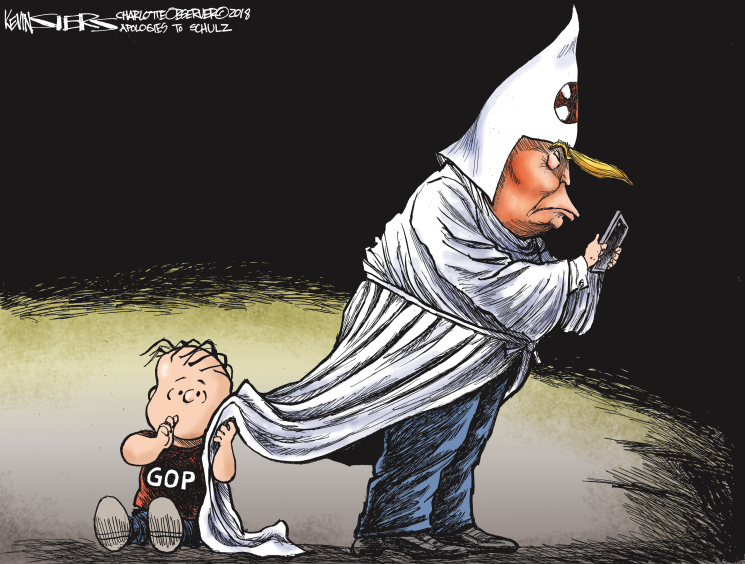 White racism was at the root of Donald Trump's 2016 candidacy, and so it will be again in 2020. Either we decisively reject it at the ballot box, and thus begin to salvage our pluralistic values, or we can acquiesce in the slow death of the American dream.

The only thing that's shocking about his racist tweets - demanding that four congresswomen of color, four U.S. citizens, "go back" to the countries they came from - is that anyone in America still has the capacity to be shocked. This racist has been operating in plain sight ever since he relentlessly lied, year after year, that the first black president wasn't really an American. Ever since the early 1970s, when he was nailed by Richard Nixon's Justice Department for refusing to rent apartments to black people. Heck, he's still refusing to apologize for demanding that five black kids (the so-called "Central Park Five") be executed for raping a white jogger, even though they were exonerated nearly two decades ago.

Trump has drawn a firm line in the sand: Are we racists or are we not? Fundamentally, the 2020 campaign may be our last chance to decide what kind of people we want to be. We already know what Trump's base wants. We already know what the elected Republicans want, as their predictably contemptible silence made clear.

But that leaves the rest of us. Trump, by impulse or design, is daring us to prove that we are better than our most despicable instincts.

His attitude isn't new, of course. Granted, the rant directed at the four congresswomen ("you can't leave fast enough") was perhaps his most virulent; Douglas A. Blackmon, a Pulitzer Prize-winning expert on race says that Trump "is now invoking the white supremacist mentality of the early 1900s, when anyone who looked 'not white' could be labeled as unwelcome in America." But consider this critique of Trump, written on a previous occasion:

"His ascent was fueled at its core by racism that was at worst endorsed, or at minimum tolerated by a plurality of Republican primary voters. They greased his path to power. They share the responsibility for his trashing of our highest values, for the toxic poison he has injected into the body politic."

I wrote that - 18 months ago - when Trump trashed immigrants of color by saying, "Why are we having all these people from shithole countries come here?" If you're not too numb, you may remember that. Trump hasn't changed a whit since, except for the worse. Character is destiny, his was forged long ago, and not even the decisive loss of the House in the 2018 midterms has shaken his resolve that bigotry should be big on the ballot in 2020. Are we sufficiently stoked to prove him wrong? Will Democrats be sufficiently enlightened to set aside their usual ideological squabbles and unite to reject racism?

The fundamental challenge we face next year is to live up to this American ideal:

"We lead the world because, unique among nations, we draw our people - our strength - from every country and every corner of the world. And by doing so we continuously renew and enrich our nation ... Thanks to each wave of new arrivals to this land of opportunity, we're a nation forever young, forever bursting with energy and new ideas, and always on the cutting edge, always leading the world to the next frontier... It is bold men and women, yearning for freedom and opportunity, who leave their homelands and come to a new country to start their lives over. They believe in the American dream. And over and over they make it come true for themselves, for their children, and for others."

President Ronald Reagan doesn't resonate anymore within the Trumpist GOP, and any contemporary Republican who'd dare talk that way would probably be trounced in a primary. But for the rest of us, may his words be a lantern in the darkness on the pitted road to 2020.