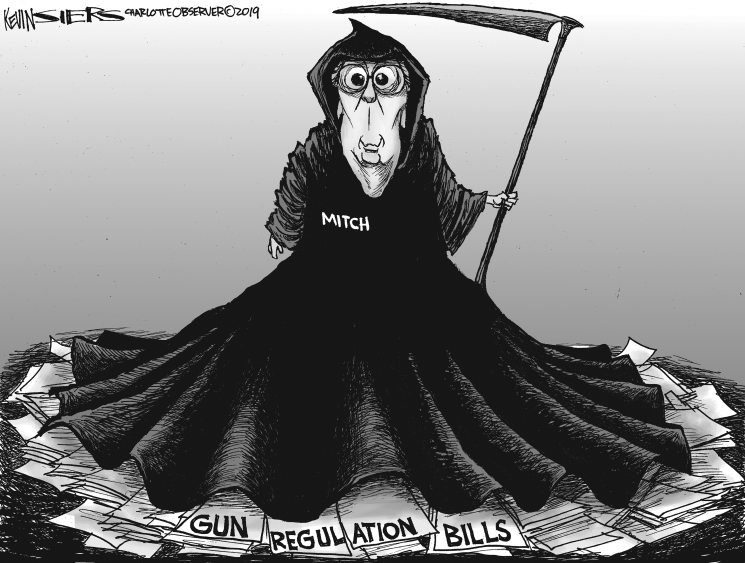 The word in Colorado is that John Hickenlooper is being pressured to quit his futile presidential quest and run for the Senate in 2020. Good.

A top newspaper in Texas is pleading with Beto O’Rourke to quit the presidential race and run for the Senate in 2020. Good.

Democrats hither and yon are urging Montana Gov. Steve Bullock to quit the presidential race and run for the Senate in 2020. Good.

In other words, a sizable share of Democrats fully recognize that capturing the Senate, and dethroning Mitch McConnell, is nearly as critical as ousting Donald Trump. Even if they do manage to put a Democrat in the White House, the new president’s legislative agenda and federal court nominations are DOA if Republicans still rule the Senate. McConnell has been candid about that. In April, he told an audience in home state Kentucky: “If I’m still the majority leader of the Senate after next year, none of those [Democratic] things are going to pass the Senate. They won’t even be voted on. So think of me as the Grim Reaper.”

For Democrats, winning the Senate in 2020 will be a daunting task anyway – most of the competitive seats are in red states – but they’ll definitely fail unless they field the strongest possible candidates. Some of them are currently wasting their time and money cluttering the presidential debate stage, and when asked how a Democratic president would be able to get anything done with McConnell still at the Senate helm, their answers were lame. (Elizabeth Warren: “We have to push from the outside and have leadership from the inside and make this Congress reflect the will of the people.”)

McConnell’s Moscow-friendly maneuvers should be sufficient motivation – have you heard the latest news, about how one of his Senate actions triggered a huge Russian investment in his home state?But Democratic strategist Brad Bannon rightly warns that unless McConnell is relegated to the minority in 2021, “life will be hell” for any new Democratic president.

So much press emphasis is being placed on the presidential race that we pay insufficient attention to the daunting Senate map. If Democrats win the presidency, they need a net gain of three seats to control the chamber, which doesn’t sound like a lot until you see the map. Republican incumbents are up for re-election in 22 states, but only two of those states – Colorado and Maine -have gone blue in the last two presidential elections. If we assume, for the sake of argument, that Hickenlooper goes home and unseats Cory Gardner, and that Maine finally ousts so-called Republican “moderate” Susan Collins, Democrats would only need to net one more Senate seat.

Unless Alabama Republicans debase themselves by renominating accused child molester Roy Moore, it’s likely that Democratic incumbent Doug Jones will lose in 2020. So where else can Democrats net two more seats?

Maybe, conceivably, in some combination of red Arizona (ex-astronaut and Gabby Giffords spouse Mark Kelly has a shot), red Georgia (where Stacey Abrams declined to run), red North Carolina, red Iowa, red Texas (if O’Rourke runs), and red Montana (if Bullock runs). McConnell himself is up for re-election in Kentucky, but that’s one of the strongest of all red states – Kentuckians backed Trump last time by 25 points – and MAGA voters will again flood the polls, benefiting McConnell down ballot. (One big reason why Democrats aren’t strongly competitive in those states is because the party’s appeal to culturally conservative, small-town, and rural voters has waned in recent decades. Democrats badly need to reconnect. But that’s a discussion for another day.)

The bottom line for 2020 is that unless Democrats can pull off a near-miracle by fielding their strongest senatorial candidates – including Hickenlooper, O’Rourke, and Bullock – the chamber will bury whatever a Democratic president aspires to do.

Kamala Harris, the senator who’s hoping to trade up to the top job, reminded an audience last month that “2020 is also about the United States Senate,” but with everyone seemingly fixated on the presidential race, that message has yet to resonate.

Never a Cop Around When You Need One
by Michael Shannon
It's been a tough year for keepers of the peace. First you had the "heavily-armed" 2nd Amendment supporters in Richmond, Va. The Associated Press warned it was going to be a "show of force." That looming threat forced Virginia Gov. Ralph 'Blackf ...
Like NAFTA, Trump Trade Deal Lacks U.S. Worker Protections

by Joe Guzzardi
A few years after President Bill Clinton signed the North American Free Trade Agreement, Rolling Stone sent investigative reporter Dan Baum out to pound the pavement to learn how the globalist-hyped deal was working on both sides of the border. ...
‘If You Want Law And Order, Give Us Justice!’

by John L. Micek
In this space last week, I wrote about the importance of really listening to what black and brown Americans are trying to tell us as they've taken to the streets - propelled by generations of anger and sadness - to call for the same treatment an ...