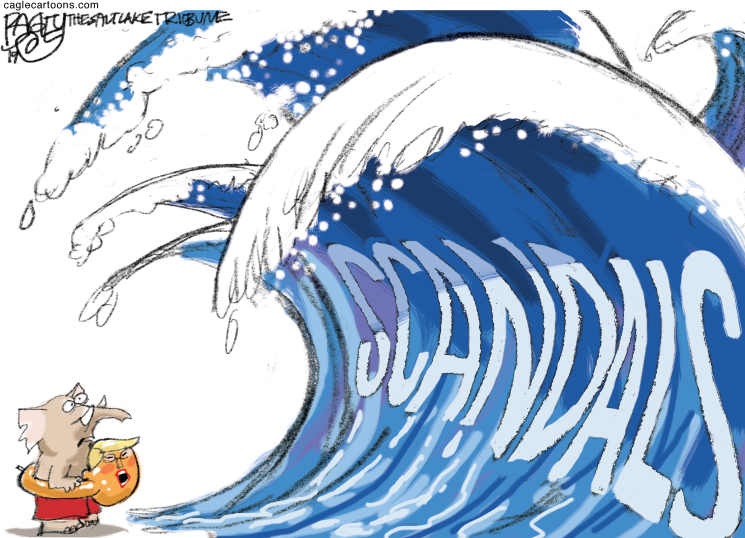 Surely I'm not alone in noticing that most of the people fueling Donald Trump's impending impeachment are women. This strikes me as significant.

We have Nancy Pelosi, the highest-ranking female lawmaker in history, who kick-started the burgeoning probe that will put impeachment into the first paragraph of Trump's obituary.

We have the five moderate House Democratic women, all with national security pedigrees (ex-CIA, ex-Air Force, ex-Navy), who shattered the House's inertia on Sept. 23, by assailing Trump's impeachable bid to squeeze Ukraine for domestic campaign dirt. Joined by two token men, the women wrote that Trump's collusion efforts "are a threat to all we have sworn to protect... This flagrant disregard for the law cannot stand."

We have Marie Yovanovitch, the career diplomat who served as U.S. ambassador to Ukraine until she was recently ousted by Trump and henchman Rudy Giuliani for failing to play ball on the plot to get (fake) campaign dirt. Last Friday, she ignored a presidential directive not to testify on Capitol Hill and warned that Trump and Giuliani are shredding the American-led alliances that had kept the peace for generations.

"The harm will come come when bad actors in countries beyond Ukraine see how easy it is to use fiction and innuendo to manipulate our system," Yovanovitch said. "In such circumstances, the only interests that will be served are those of our strategic adversaries, like Russia, that spread chaos and attack the institutions and norms that the U.S. helped create and which we have benefited from for the last 75 years."

Now we have Fiona Hill, a former intelligence officer who served on the National Security Council as senior director of Russian and Eurasian affairs until she quit in July. On Monday, ignoring the Trump regime's refusal to cooperate, she became the first White House official to testify in the impeachment probe.

Some of the closed-door details have inevitably leaked, and bravo to Hill for what she has revealed. She said that Giuliani, Mick Mulvaney (Trump's acting chief of staff), and Gordon Sondland (rich Trump donor who bought himself an ambassadorship to the European Union) ran a rogue operation to squeeze Ukraine for dirt on Joe Biden. And she said that her NSC boss at the time, John Bolton, was horrified. She quotes Bolton as saying, "I am not part of whatever drug deal Sondland and Mulvaney are cooking up... Giuliani's a hand grenade who's going to blow everybody up."

Hill also reportedly testified that Sondland had no right to meddle in Ukraine affairs; as ambassador to the EU, he was ranging far beyond his duties. But he told her that he was in charge of Ukraine, and when she asked him who told her that, he said it was Trump. In her presence, he also said that Ukraine president Zelensky would get a White House invitation if Zelensky agreed to open an investigation of the Bidens.

Why have the five moderate first-term lawmakers from traditionally red districts, Nancy Pelosi, Fiona Hill, and Marie Yovanovitch (Trump's assessment: "the woman was bad news") been so willing to storm the barricades while so many men close to power have stayed silent or cowered behind the lines?

Perhaps it's merely what one of the five lawmakers, ex-CIA officer Elissa Slotkin of Michigan, recently said: "Having a sitting president of the United States use leverage over a foreign leader to get dirt on an opponent that very basic idea, I think, cut for us, as national security people, just close to the bone."

But I suspect that the real reason is broader and simpler. Women in power, and those who seek a share of it, are less likely than ever to take any crap. Pelosi said it best last November, after an historic blue wave drowned the male-dominated House Republican majority: "I want women to see that you do not get pushed around. You don't run away from the fight."

Trump was back on Twitter Monday, fuming about "A total Impeachment Scam!" But if there's any justice, historians will one day record that women like Yovanovitch and Hill were the heroes who helped take him down.