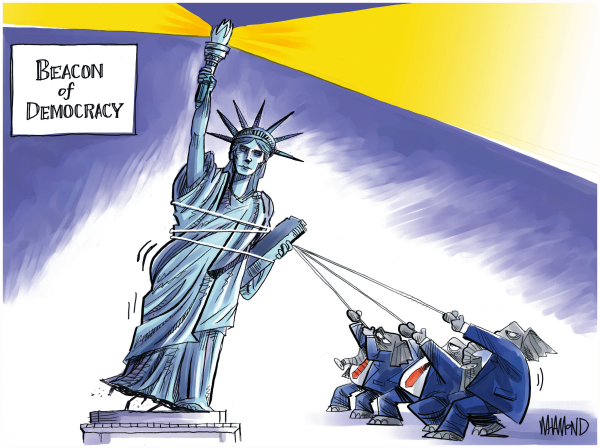 On a podcast the other day, national political reporter Thomas Edsall analyzed the mounting threat of Republican authoritarianism and posed a great question:

“Trump and the Republican party have created a real dilemma for the media... A party of sedition is trying to (enact) rules that even when it loses, it wins... We have a different animal in the ballgame now. One side is dominated by a party that is willing to accept lies, that is delusional... a party that is on the verge of becoming something unseen in America, beyond the point of no return…When you have a party that is moving in this extreme fashion, how do we in the media describe it?”

The old days of both sides false-balance journalism, the old days of writing “on the one hand, on the other hand,” the old days when both parties honored democracy by accepting the election results – those days are over. When one party openly declares that it no longer believes in democracy, when indeed it is working non-stop to destroy it, journalists can no longer take refuge in “neutrality.”

Richard Tofel, founder of the investigative journalism website ProPublica, wrote recently that neutrality is an “attractive value” only “if you view public life as an endless series of fights between two sides distinguishable most importantly by the primary colors of their uniforms.” But all too often – and especially now – neutrality is merely “an appropriate pose for the uninformed.”

Any journalist who’s remotely informed about what’s going on in 2021 should be compelled to point it out in plain language. If arsonists are torching a house, and it’s burning in front of your eyes, you report it and identify the arsonists. It’s not enough to say “Senate Republican leader Mitch McConnell hopes to win the chamber in 2022.” It’s factually accurate to simply say, “Senate Republican leader Mitch McConnell, after voting to exonerate a president who inspired an anti-democratic coup attempt, hopes to win the chamber in 2022 and strengthen Republican vote-suppression efforts in 2024.”

In a national civic emergency, the mainstream media needs to be pro-democracy and pro-truth. That is not “bias.” That is patriotism.

The problem, however, is that too many journalists (especially the older, more seasoned ones) are stuck in the old paradigm. Jay Rosen, a media critic at New York University, said it well last week: The press is still too invested in “the game – ‘who are the winners and losers, who’s ahead, what’s the strategy?’ You can keep doing that right up until the point when democracy disintegrates.”

I agree. So does Tom Edsall: “In times of big change, reporters have a harder time finding ways to describe it and to deal with it. Reporters are usually fixed in a language that they’ve (long) been using to describe political competition.” Nevertheless, “you have to look at the truth…The press has been reluctant to look at the truth adequately... That is what the press is supposed to do. I’m personally against mincing words,” whereas, at too many mainstream outlets, “the pressure is to mince words.”

Granted, the word authoritarian upsets a lot of people. But what more empirical evidence do we need that the GOP wants to turn America into Turkey, Hungary, or worse? In plain sight, its state-level lawmakers are working to sabotage future free elections – ensuring that Republican state legislatures have the power to invalidate Democratic wins, installing local election officials who can refuse to certify Democratic wins, enacting a string of new voter suppression laws that are designed to protect their white minorities.

Meanwhile, the GOP’s national leaders remain in thrall to the loser who thinks the 2020 election was stolen, and they continue to pretend that the insurrectionist coup attempt was a mirage. As Edsall says, “stuffing things down the memory hole is precisely what authoritarianism does.” If we journalists don’t point that out, we’re not doing our jobs.

James Madison, who championed the Bill of Rights, warned more than two centuries ago that a free country starved of accurate knowledge “is but a prologue to a farce or a tragedy; or perhaps both.”

Both indeed. The clock is ticking.