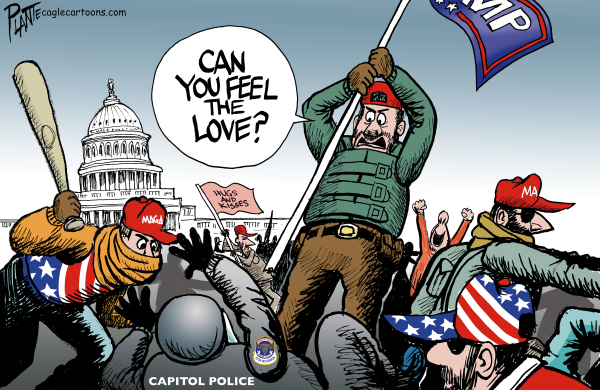 Has this been a great year or what? Don’t answer.

Thanks to the work of the House’s Jan. 6 committee, and thanks to our still-free and independent press, we’ve been showered with fresh information about the insurrectionist attack on our democracy – the planning, execution, and aftermath.

Have you kept up with the dirty details? Here are 10 brain-teasers to test your knowledge. Afterwards, you can always shower off the stink. The answers are down at the bottom – but no peeking or Googling!

1. Trump chief of staff Mark Meadows urgently emailed a Justice Department official with breathtaking news about an evil conspiracy that he believed warranted investigation. What was it?

a) Biden supporters in the National Security Agency had used Chinese satellites to cancel Trump votes in five swing states.

b) Biden supporters in the CIA had used Italian satellites to remotely switch votes from Trump to Biden.

c) Biden supporters in the Defense Intelligence Agency had used Russian satellites to trick Venezuelan computers into altering the results in Georgia and Arizona.

d) Biden supporters in NASA had threatened to jam all transmissions from Japanese satellites unless that nation agreed to remotely throw Michigan and Pennsylvania to Biden.

2. The Jan. 6 committee has released a 51-page report that nails Meadows as a core player in the failed coup. But acting deputy attorney general Richard Donaghue concluded long ago that Meadows’ various election fraud theories were:

c) ”should get with the program, or else something will land on his head worse than that fly at his debate.”

d) ”should announce that not a single word in our Constitution says that the vice president shall certify the beneficiary of massive election fraud.”

4. Like the Wicked Witch dispatching her flying monkeys, Trump at his rally commanded his followers to march to the Capitol and

a) ”be tough very strongly.”

d) ”get me a bigly beautiful souvenir.”

5. Prior to the insurrection, one scholarly Proud Boy wrote on a group chat that he and his manly MAGA men intended to storm the Capitol in order to

a) ”target the black cops.”

b) ”spread our feces with extreme prejudice.”

c) ”burn it all down and pose for selfies.”

6. Texas real estate broker Jen Ryan, who flew to the insurrection on a private plane and predicted she’d never be jailed because “I have blonde hair and white skin,” wound up jailed for 60 days. In court she’d insisted that the prison sentence was unfair, because

a) ”this is not anything that remotely resembles who I am.”

b) ”I’d been invited to exercise my free speech rights by my President.”

c) ”I never thought I’d be persecuted so badly for being white.”

d) ”I have two condo closings next month that I really can’t miss.”

7. Jacob Chansley, the moronic invader who wore horns on his head, ultimately landed in the slammer – where he requested, in his words,

b) “a special organic diet.”

a) He claimed that dead Venezuelan leader Hugo Chavez fixed the election for Biden.

b) He waited in Dallas with the QAnon people for JFK Jr. to show up undead.

c) He wrote the coup PowerPoint that was shown to congressional traitors.

d) He hugged Trump at the Jan. 6 rally and cried very strongly.

9. A few months after the insurrection, Trump told ABC’s Jonathan Karl that the goons’ demand to hang Mike Pence was:

a) ”so beautiful, very strongly.”

b) ”what you’d expect from very good people.”

10. The other day, referencing the work of the Jan. 6 committee, someone remarked: “It was a horrendous event, and I think what they’re seeking to find out is something the public needs to know.” Who said that?

Bonus. True or False: The Jan. 6 committee is trying to turn over every rock. But no matter what it ultimately unearths, roughly half the people in this country will sleepwalk to the end of democracy.