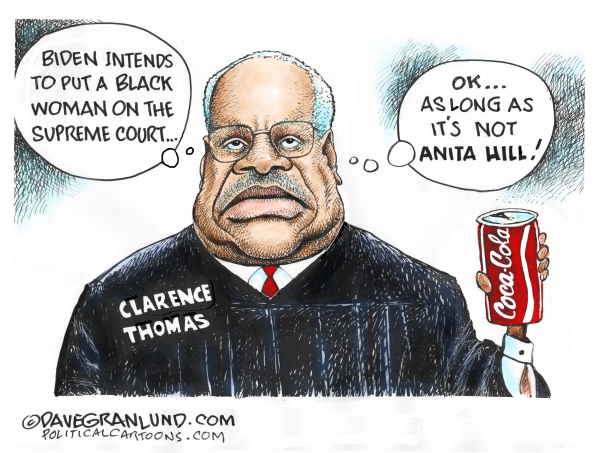 When word spread last week about an imminent Supreme Court retirement, I hoped against hope that it would be Clarence Thomas.

Replacing Clinton appointee Stephen Breyer with a Biden appointee is really no biggie. Ridding the court of Clarence, and his blatant conflicts of interest, would be a major upgrade – at least in terms of repairing the court’s record-low reputation. Because for more than 20 years it has been an open secret, and a patent disgrace, that wife Ginni has been a right-wing activist working on a range of hot button issues on which hubby sits in judgement.

Perhaps it’s sheer coincidence that he was the lone dissenter in the 8-1 ruling that bars Donald Trump from blocking the release of documents about the Jan. 6 insurrection – the same event that Ginni agitated for on Facebook, the same event to which she helped send busloads of insurrectionists. At the very least, it sure looks bad. In fact, the official Code of Judicial Conduct, embedded in federal law, specifically states that “any justice, judge, or magistrate judges of the United States shall disqualify himself in any proceeding in which his impartiality might reasonably be questioned” by a reasonable, objective person.

Yup, the code says “any justice.” Problem is, the Supremes exempt themselves from the code.

There are no Supreme Court rules governing conflict of interest. The justices police themselves, which of course means that, in practice, they don’t police themselves at all. All other federal judges in all the lower courts are inhibited from putting themselves in any situation that might convey an appearance of impropriety. But not the nine folks at the top of the pyramid.

That’s long been a great deal for Clarence and Ginni. As far back as December 2000, while the high court was weighing whether to stop the Florida recount and award the White House to George W. Bush (which it did, with Clarence voting in the 5-4 majority), Ginny, as a staffer at the conservative Heritage Foundation, was already screening resumes for the incoming Bush administration. A decade later, Clarence sat in judgement of Obamacare while Ginni was earning roughly $165,000 working for several groups that lobbied to repeal Obamacare. During the Trump administration, Ginni worked closely with (and was paid by) a prominent anti-immigrant activist who filed amicus briefs defending Trump’s Muslim travel ban – while Clarence was hearing cases about the travel ban.

The conflict of interest episodes are too numerous to list here. Suffice it to say that Clarence steadfastly refused to recuse himself, despite repeated demands over the years that he do so. It’s a blatant breach of judicial ethics – and the all-important perception of impartial justice – that he’s still on the bench when gay rights cases get debated (Ginni is on record railing against “transsexual fascists”), and when national security cases get weighed (Ginni is on record railing against “the Deep State”).

Last year, a bipartisan coalition of 107 law professors from 76 law schools asked Congress to require that all federal judges with perceived conflicts at least explain in writing the reasons why they’d refused to recuse themselves. A tepid reform, for sure. But right now Clarence doesn’t have to explain anything.

The only available constitutional remedy is for the House to target the guy with an impeachment probe. Democrats, who run the Judiciary Committee, could subpoena Ginni and ask pointed questions about her actions on behalf of the Jan. 6 insurrectionists. With that matter under investigation, Clarence might actually be compelled to recuse himself on all Jan. 6-related cases. But alas, as we all well know, hand-wringing Democrats shrink from that kind of hardball.

So I suppose there’s only one solution. President Biden, having pledged to replace Breyer with a well-qualified Black woman, should simply announce that his choice is Anita Hill. Having long survived Clarence Thomas’ sexual harassment, the attorney and law professor is rested and ready.

Perhaps forcing Clarence to share the bench with Hill would be sufficient impetus for him to quit.