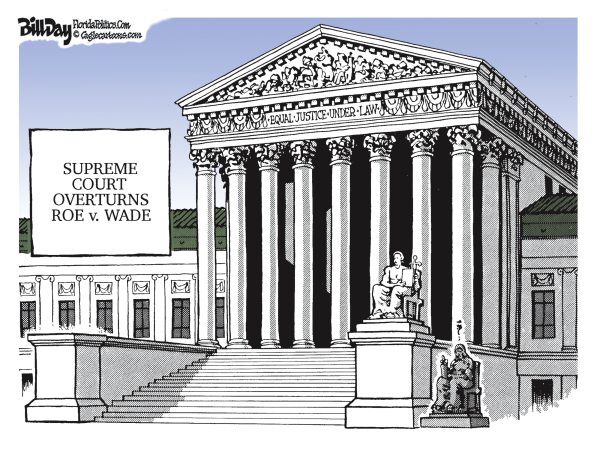 It’s shocking that someone within the Supreme Court enclave would take the extraordinary step to leak the draft opinion that kills Roe v. Wade and propels women back to the coat-hanger era. But what’s not shocking in the slightest is the draft opinion itself.

Did we really expect anything else? It’s not as if the Republican rightists and the censorial evangelicals and the meddling moralists and the craven misogynists had not signaled for decades exactly who they were and what they were plotting to do. It’s not as if Mitch McConnell wasn’t signaling his intentions when he stole a Supreme Court seat from a qualified Obama appointee. It’s not as if Donald Trump wasn’t making it plain as day when he promised to put three or four Roe foes on the court. It’s not as if Republicans hadn’t stated over and over, election after election, that it considered “the sanctity of innocent human life” (introduced in the GOP platform of 1980) and the composition of the high court to be intertwined first-tier voting issues.

They’ve been playing the long game, and now it’s finally poised to pay off. They haven’t cared a whit whether most Americans were on their side about criminalizing abortion (most Americans are still not on their side), because they answer only to God or whatever purportedly higher entity. They’ve been single-minded and focused and ruthless – unlike the too often lazy and oblivious pro-choice majority.

Let’s talk about that pro-choice majority. Let’s put the blame for the impending post-Roe dystopia squarely where it belongs.

I’ll spare you the long history by starting the clock in 2000. When George W. Bush ran for president, he wooed and won the Christian right with explicit promises to craft a right-wing anti-Roe court. (Justice Alito, who wrote the draft opinion, is a Bush appointee). Bush’s pledge was applauded by conservative activists like William Kristol, who told me in 1999 that overturning abortion rights was a top priority and that “the biggest impact the next president will have on domestic policy will be in the realm of high court appointments.” In response, Democrats and progressives barely mentioned the court in that campaign.

Fast forward 10 years. Infuriated by Barack Obama’s presidential victory, the Republicans – always thinking ahead – launched a massive effort to capture state legislatures in the 2010 “off-year” elections, in order to undercut Roe with state restrictions. In response, Democrats and progressives devoted a comparable pittance of money and resources to those state races. Result: a red tsunami at the grassroots.

Did Democrats and progressives learn their lesson and realize that “off-year” elections were kinda important? Not a chance. When the next round came along, in 2014, Democratic turnout was anemic yet again. Result: Republicans seized control of the Senate and McConnell, the new majority leader, was thus empowered to block Obama nominee Merrick Garland, to the point of even denying him a hearing.

Did Democrats and progressives respond with a sustained focus attack on that stolen seat, using it as a springboard to make the 2016 presidential race a referendum on the future composition of the Supreme Court? Not a chance. Not even after Hillary Clinton explicitly warned what would happen to Roe if she were to lose: “Our next president could appoint as many as three or four justices in the next four years…That’s why this election is so important.”

Alas, what was deemed to be far more important was the feeling that Hillary was not pure enough or likable enough or her voice was too “shrill” or there must have been something sinister in her emails.

Here’s the big difference between the two partisan camps: Republicans and conservatives of all stripes had all kinds of legitimate qualms about Trump, but they stayed focused on their ultimate judicial mission: to deny women bodily autonomy. That kind of thinking was anathema to liberal litmus-testers.

And sure enough, when the 2016 exit polls were released, the damage was done: One-fifth of all voters cited the Supreme Court as the “most important” factor in their voting decision – and among those folks, Trump swamped Hillary by 15 percentage points.

So here we are now, paying the price for decades of apathy – willfully blind to the plotted theft of women’s privacy rights, happening in plain sight. The furious Democratic reaction to the leaked draft opinion is so tiresomely in character precisely because Democrats by nature are so tiresomely reactive.

Joe Lockhart, a pro-choicer and former Bill Clinton spokesman, wrote on Twitter: “We have an election coming up to actually do something.” That’s fine, as far as it goes. It certainly would be nice if lazy pro-choice folks get off their duffs en masse and “do something” to rid us of Republican incumbents at all levels in the impending midterms.

I’ll believe it when I see it. And it’s so grievously in character for the Democrats to wait until the GOP’s long game is almost over and hurl a Hail-Mary pass as the clock runs out.