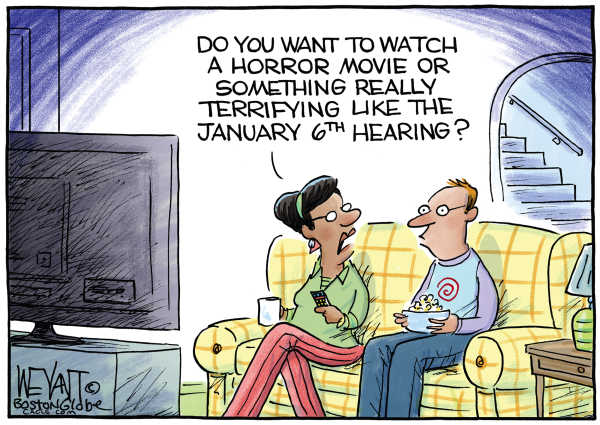 The fascist threat at the top, so well documented by the Jan. 6 Committee, is rightfully seizing our attention. But it’s also happening from the bottom up.

In Nevada's Republican primary, he became the cult’s candidate to be secretary of state – the election overseer in that narrowly blue locale. Marchant, a former state assemblyman, got the nod because he told the voting cultists that if he had been secretary of state in 2020, he would’ve refused to certify Joe Biden’s solid statewide victory. And if he’s elected in November, he promises to “overhaul the fraudulent election system in Nevada,” even though there’s zero evidence of a fraudulent election system in Nevada.

This is how the MAGA termites are going about their business of chewing democracy’s woodwork.

Imagine if Marchant is the Nevada secretary of state in 2024, when the presidential balloting potentially trends blue. Imagine, moreover, that similar loons are overseeing the 2024 election in other states crucial to Democratic hopes – like Michigan, Minnesota, New Mexico, and Arizona – which is entirely possible, because MAGAts are running in those races, too.

At the risk of making you more paranoid, there’s solid evidence that some of the MAGA work to seize secretary of state posts is being orchestrated by a QAnon promoter who goes by the pseudonym “Juan O Savin” – courtesy of something called The America First Secretary of State Coalition. Yes, folks, the QAnon crowd and the MAGA crowd have wedded in holy matrimony. If Abe Lincoln, the first Republican president, could behold what has happened to his party, he’d never stop retching.

It’s all happening in plain sight, as so-called “Juan O Savin” can attest. Not long ago he told a radio show: “I started with Jim Marchant here in Nevada, who has then taken a primary role in this coalition as other candidates have come in, going out around the country and helping vet that we got the right players that are inside the coalition.” He candidly says that the goal is to rig the election system – In his words, “to get to the right result…How are we going to coordinate between the various states to get the right outcome?”

The “right” outcome. And Marchant concurs. During a podcast earlier this month, he told contempt-of-Congress indictee Steve Bannon: “If we get just a few of the candidates that we have in our coalition, we save our country.” Another Marchant remark, on another occasion, referring to his MAGA allies: “Not only did they ask me to run, they asked me to put together a coalition of other like-minded secretary of state candidates. So I got to work. ‘Juan O Savin’ helped.”

They’re gnawing the woodwork below the secretary of state level, too – by enlisting various election-overseeing candidates at the county level. New Mexico held primaries on June 7, but, lo and behold, the Republican election commissioners on rural Otero County canvassing board are refusing to certify the county results… because, without a shred of evidence, they say they don’t trust the Dominion voting machines.

Here’s a shock: One of the county election officials, Couy Griffins, is the co-founder of something called Cowboys for Trump. Apparently, the fact that he was recently convicted of illegally entering restricted Capitol grounds on Jan. 6 has not cured him of the impulse to sabotage the democratic machinery. New Mexico’s secretary of state got so fed up that she complained to the state Supreme Court – which ordered the county board to do its job and certify.

But there’s also some good news: Various anti-fascist groups are actually paying attention to all this localized perfidy. For instance, the Demo­cratic Asso­ci­ation of Secret­ar­ies of State is hyper-focused on the looming threat, and it’s racking up more donations than ever before. American Bridge, another group that helps Democrats, is targeting election deniers running for secretary of state and other local posts. The American SOS Project, a new political action committee, is running ads and raising money.

And yes, the termites can be successfully sprayed – as evidenced in May by Georgia Secretary of State Brad Raffensperger’s landslide primary victory over a Trumpist who’d sought to oust Brad for certifying Biden’s statewide win. (Trump’s command that Brad “find” 11,000 Trump votes is now the focus of a Georgia grand jury probe, and Brad may well testify in front of the Jan. 6 Committee.)

Tip O’Neill, the legendary House Speaker, was indeed correct when he said that “all politics is local.” That’s where you find the foundations of our democratic woodwork. But the overriding question in 2022 is whether most voters – fixated as they are on inflation – will care enough to protect it.