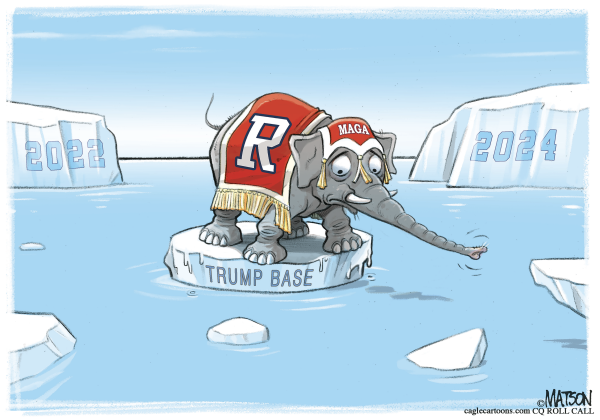 Fresh from their failures in the 2022 midterm elections, Republicans have created an “advisory council” to help craft their “2024 vision and beyond.”

Vision. That’s a hoot. By all accounts, their plan to curb inflation is to focus on Hunter Biden’s laptop.

The showrunners on "Seinfeld" had a slogan for their self-absorbed characters: “No learning.” That’s perfect for the MAGA-infested GOP, which seems incapable of learning anything. In fact, it was perfect for the GOP long before the MAGA metastasis.

After losing the 2012 presidential race, Republicans warned in an autopsy report that the overwhelmingly white party needed to modernize by reaching out to people of color, because otherwise it was “driving around in circles on an ideological cul de sac.”

Guess what happened next.

In 2016 they ignored their own advice and tripled down on circling the cul de sac by nominating Donald Trump, who proceeded to market white grievance and malign people of color. Then Trump led the party to defeat in three straight elections – the 2018 midterms, the 2020 presidential, and the 2022 midterms.

So now Republican chairwoman Ronna McDaniel thinks an “advisory council” can help determine what’s gone wrong and how to make things right. And to further that effort, here are three of the advisors she has chosen to contribute wisdom:

“Our party needs to modernize,” said Blake Masters, who drew lots of support from white extremists whose idea of modernization was turning back the clock on people of color.

The prize for magical thinking goes to the Republican National Committee, which said that the advisory council members would advise “on continuing the success we saw in 2022 such as growing the party with Hispanic, Asian, and Black voters.”

That’s an odd definition of “success.”

Black voters basically clinched Democratic control of the Senate; more than 90 percent cast ballots for John Fetterman in Pennsylvania (as did 68 percent of Pennsylvania's Hispanics), and more than 90 percent voted for Rafael Warnock in this week’s Georgia runoff. According to the nationwide midterm exit polls, only 30 percent of non-whites voted for Republicans (other estimates put the share at 27).

The funniest recent line in The New York Times was a reporter’s prediction that the GOP’s lousy midterm results “will almost certainly lead to soul-searching.” Yeah, right.

Charlie Sykes, a former conservative talk show host, had the best rejoinder: “Somehow we doubt that the GOP will spend much time rummaging through the soul they mislaid years ago.”