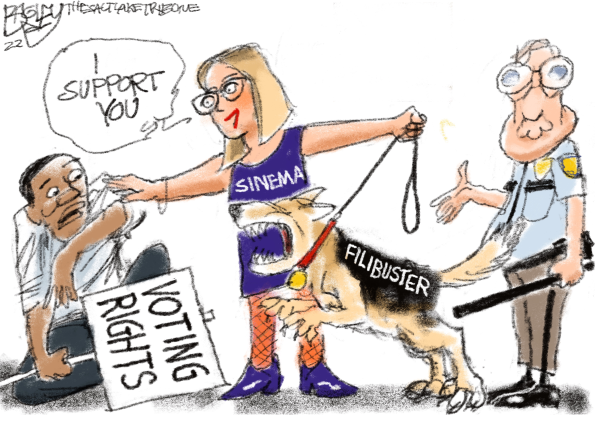 Last week, Arizona Sen. Kyrsten Sinema threw a wrench into Democrats’ plan on voting rights by continuing to oppose her own party's efforts to reform the Senate filibuster.

She's also undermining her party's leader, President Joe Biden, who delivered a speech last week in Atlanta viewed by many as a turning point for his presidency. Accompanied by Vice President Kamala Harris, Biden delivered a fiery, passionate talk at Morehouse College declaring the urgency and necessity that Congress pass the Voting Rights Act.

To me, it wasn’t all that surprising that Biden chose Atlanta as the destination to deliver such a monumental address. The city served as the cradle of the modern civil rights movement, and is home to Martin Luther King Jr, Andrew Young, and many other civil rights leaders.

Much has been made of the fact that Biden made reference to racism and Jim Crow voting laws during his speech on voting rights, including this line:

Some members of the audience gasped at such an analogy, according to reporters in attendance at the event. But Biden was spot on in his comparisons.

Eugene “Bull” Connor, George Wallace and Jefferson Davis were unapologetic racists (in the case of Wallace, he later repented) and adamant foes of the civil rights movement and racial equality in general. Indeed, the president spoke truth to power.

Who among us can forget the indelible memories of the horrific violence unleashed on March 7, 1965, better known as “Bloody Sunday.” when the late congressmen, John Lewis – for whom the bill is named — sustained a fractured skull as he and fellow protesters were beaten and gassed mercilessly by Alabama state troopers as they attempted to exercise their right to vote.

Later that evening, several television networks interrupted their regularly scheduled programming to inform the television viewing public of the chilling carnage that had occurred earlier that day in Selma, Alabama. Ironically, the ABC Sunday Night Movie that week was “Judgment at Nuremberg.”

Witnessing such a sadistic scene prompted rabid public outrage. Educational foundations, religious organizations, politicians, and private citizens from all walks of life flooded the White House with letters and telegrams demanding Congress move to ensure that American Negroes (the term used to refer to Black Americans in 1965) would not remained politically disenfranchised.

The intense public pressure culminated in Congress passing the Voting Rights Act, which was signed into law by President Lyndon Johnson on August 6, 1965.

That fact is that if it were not for tremendously brave people like John Lewis and others, it would have taken much longer for Blacks, particularly in the south, to gain those protections of the right to vote. Thus, millions of American southern Blacks would have continued to live under a system of detestable, political apartheid.

These were men and women of all races and ethnicities who embodied an undeniable and unmistakable level of courage, determination and dignity that made it possible for future generations to enjoy specific liberties that some of us have taken for granted Now voter suppression, and similar, sinister shenanigans taking place in a number of red states threaten nullify such freedoms.

Truth be told, numerous Black people (and others) who fought for voting rights in the early-to-mid 20th century endured routine death threats, foreclosure of property and poll taxes, oppressive sharecropping systems, entrenched legal discrimination, and numerous other forms of inhuman indignities on a daily basis due to race and skin color.

Too many Americans have lost their lives and endured far too much adversity in an effort to ensure that others would be granted the right to exercise their supposed constitutional rights at the ballot box. Thus, there is no other alternative than for voting rights to be upheld. Moreover, Black voters were the reason that Joe Biden and Kamala Harris reside in their current positions.

Black voters delivered for the Democrats during the last election. Now it is time for President Biden to reciprocate by passing the John Lewis Voting Rights Advancement Act and the Freedom to Vote Act by any means necessary. History demands he do so.