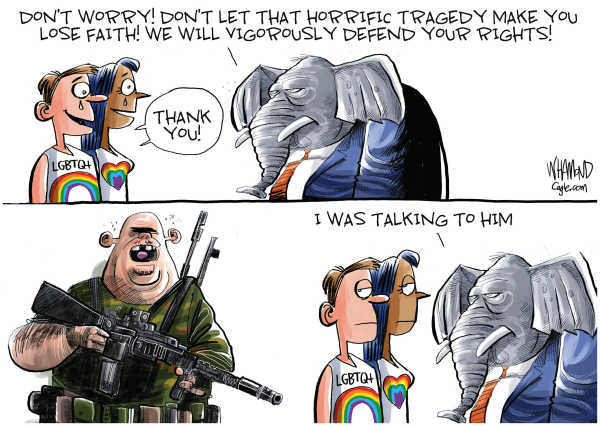 The massacre this past weekend at Club Q, an LGBTQ club in Colorado Springs, was hardly shocking given our current politically acrimonious and poisoned climate.

Police are still investigating the motive behind the shooting, in which five people were killed and at least 18 others wounded. The suspected gunman, 22-year-old Anderson Lee Aldrich, was charged with five counts of murder and several hate crimes.

The victims of this savage attack, doled out late Saturday night with an AR-15-style rifle and a handgun, were Kelly Loving, Daniel Aston, Derrick Rump, Ashley Paugh and Raymond Green Vance.

Colorado Gov. Jared Polis, who in 2018 was the first openly gay man elected governor in the U.S., called the shooting "horrific, sickening, and devastating."

Interestingly, the accused Colorado Springs shooter is the grandson of Republican California Assemblyman Randy Voepel, who represents eastern San Diego County. Voepel is a staunch MAGA republican who was steadfast in his support of the January 6, 2021 insurrection. He was quoted as telling the San Diego Union-Tribune: "This is Lexington and Concord. First shots fired against tyranny.”

"Randy Voepel certainly had a reputation as an extremist, as a loose cannon, as a hard-right, MAGA Republican — who was anti-gay, racist and very pro-second amendment," said Democratic Assemblymember Cottie Petrie-Norris, who represents Laguna Beach.

Thanks to the heroism, bravery and quick thinking of two patrons in attendance, many more deaths and human carnage were prevented. One hero was Richard Fierro, a decorated Iraq and Afghanistan veteran who had taken his family to support a drag show performer who was friends with his daughter. Another was Thomas James, a U.S. Navy information systems technician second class who zeroed in on the shooter and managed to overpower him.

Recent information exposed about the suspected gunman revealed he had a history of violence against women. He was arrested last year after and hours-long standoff with police after making a bomb threat against his mother. He was charged with multiple felonies, nonetheless, he still had access to guns.

Many conservatives have spent the past few years consuming the irresponsible drivel pushed by Fox News and others that gay and trans people are “groomers” – meaning perverts and pedophiles who want to molest children, or sterilize them, or confuse them into leading wayward, immoral, and derelict lives. It's similar to the myth perpetuated about Black people that we're all violent, lazy and oversexed.

The "groomer" idea originated out of the outlandish QAnon conspiracy theory that influential Democratic politicians and Hollywood celebrities are kidnapping children, both for sex trafficking and to harvest their glands to make youth serums. Such discredited theories led to the attack on a Washington, D.C, pizza parlor in 2016, where it was believed Hillary Clinton and others had a secret human trafficking operation. Sad to say, there are more than a few poor, misguided souls who believe such outlandish nonsense.

One should not have to have the acumen of a rocket scientist to realize that the vast majority of LGBTQ people love their parents and siblings. They care deeply for their close friends, care about the environment, and do not abuse or mistreat children. They are not trying to “convert” anyone and, like most straight people, mind their own business.

Why such a reality is so hard for some people on the right to understand is nothing short of bewildering. My heart goes out to the families of these young people whose lives were taken from them far too soon by an unhinged psychopath. May they rest in peace.