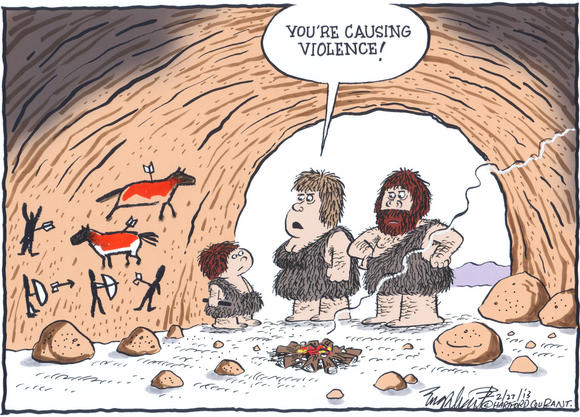 Art doesn't cause violence. Arrows cause violence. Here we go again with the age old debate. We've been here before with "Beavis and Butt-Head", "Ren and Stimpy", "Itchy and Scratchy", "Tom and Jerry" and a host of other violent cartoons, video games, movies and novels.

The reason we have violence in art is that it reflects the violent world we live in. Children play with toy guns because they're trying to make sense of the world they live in. It's as much a part of the human experience as making up scary stories around the campfire.

I know the story of a young boy in day care who was playing guns. The concerned teacher told his mother and she tried to stop him by taking his toy guns away. The next day, he went to day care and used the banana in his lunch as a toy gun. That young boy is a man now and he's not violent in any way.

Art feeds fantasy, yes, but we all have fantasies that would land us in jail or the hospital if we acted on them. We can label art with ratings. We can monitor what our children watch when we're there to supervise. We can put age limits on its purchase, but as long as the world remains a violent place, there will be art made to reflect it and process it in a safe, controlled manner. It's the mentally healthy thing to do.

Bob Englehart is a free lance cartoonist and his cartoons are syndicated by Cagle Cartoons.
View Full Archive