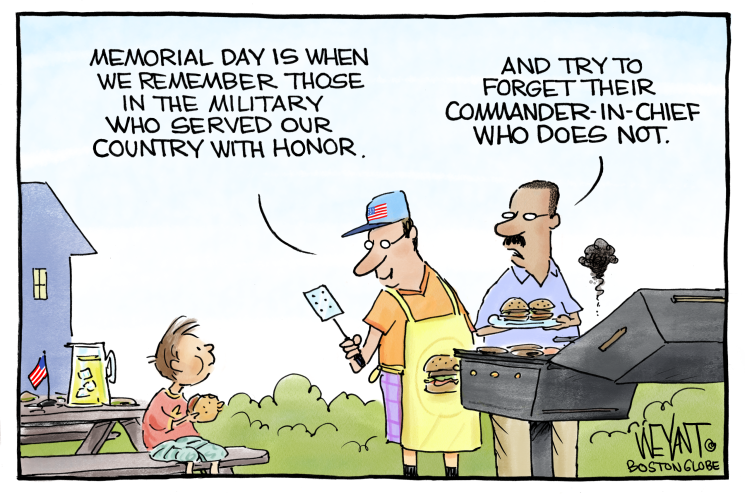 President Trump and his most devoted allies (both in Congress and on cable news) have themselves all worked up once again.

In a matter of days, a conspiracy theory has once again become mainstream thought on the American right. The assertion this time is, very roughly, that the Deep State embedded a saboteur in the Trump campaign’s early days. It could be, per the president’s Twitter feed, “one of the biggest political scandals in history.”

It is not “one of the biggest political scandals in history.” There is no spy – the person in question was a longstanding intelligence source who was looking for information about foreign interference rather than the Trump campaign. So far, the whole episode smacks of March 2017’s hollering about President Obama’s “wiretapping” Trump Tower’s phones during the election season. A standard practice (in that case, the necessary unmasking of individuals picked up in legal surveillance of foreign activity) was amplified through so much hyperbole, fear-mongering, and innuendo that it became a wild scandal – until the president had no proof to show and everyone forgot about it and moved on.

But truth is not the point of the “spy” conversation (nor a primary concern of the Trump orbit in general). President Trump is simply out to the muddy the waters on the ongoing investigation into how he and his team were involved with Russia’s interference in the 2016 election. And with that goal of theirs in mind, it’s worth taking a moment for a Russia refresher.

We know – thanks to unanimous and public judgment of the U.S. Intelligence Community – that Russia interfered in the 2016 election specifically to benefit then-candidate Trump. At a bare minimum, they used social media influence campaigns to stoke divisions and spread misinformation. They also worked to penetrate voter rolls in key states. Thirteen Russian nationals and three Russian companies have been indicted for that behavior. It is not an opinion that Vladimir Putin helped President Trump get elected – it is a fact.

We also know that on at least three occasions, people in the Trump orbit were looking for opportunities to benefit from foreign help. The most famous instance was the June 2016 Trump Tower meeting attended by Donald Trump Jr., Jared Kushner, and Trump Campaign Manager Paul Manafort. Trump Jr. responded to the offer of dirt on Hillary Clinton not by calling the FBI, but by saying “If it’s what you say, I love it.”

There was also Roger Stone’s back channeling with Wikileaks, which was releasing harmful emails about Democrats stolen by Russian state-sponsored hackers, as well as a new meeting wherein the hapless Trump Jr. also was offered (and possibly received – we don’t yet know) aid from the Saudis, the Emiratis, and an Israeli social media company. And despite what the president’s crack legal team may argue, accepting help in an American election from a foreign nation isn’t ‘opposition research,’ ‘politics as usual,’ or ‘a gift’ – it’s illegal.

And finally, we know that those in Trump’s orbit have tried repeatedly to hide their conversations with Russians during and after the campaign. Attorney General Jeff Sessions mislead about campaign meetings during his confirmation. Jared Kushner had to amend his security clearance form – specifically, the list of foreign contacts – over and over, to say nothing of his secret conversations about a backchannel to the Kremlin during the presidential transition. And Michael Flynn, the Trump administration’s first National Security Advisor, had to resign for lying about conversations he had with the Russian Ambassador (Flynn was later indicted; three other Trump campaign associates have been too, and two pled guilty like he did).

There are far more details beyond those, but the core, essential points remain the same: Russia interfered to help Trump win, and multiple people in the Trump orbit enthusiastically welcomed their help, as well as lied about contacts they had with Russians afterwards.

It’s easy to get lost in the evolving details and legal minutia of the Russia investigation’s entirety. Still, focusing on the core events, recurring patterns, and basic messages is key. For maximum effect, it should be done in tandem with a wider discussion of the Trump Administration’s flagrant corruption (a topic for another column all together). But harder still, we must hold onto these truths even as the president drags us all down with him into the next conspiracy theory rabbit hole.