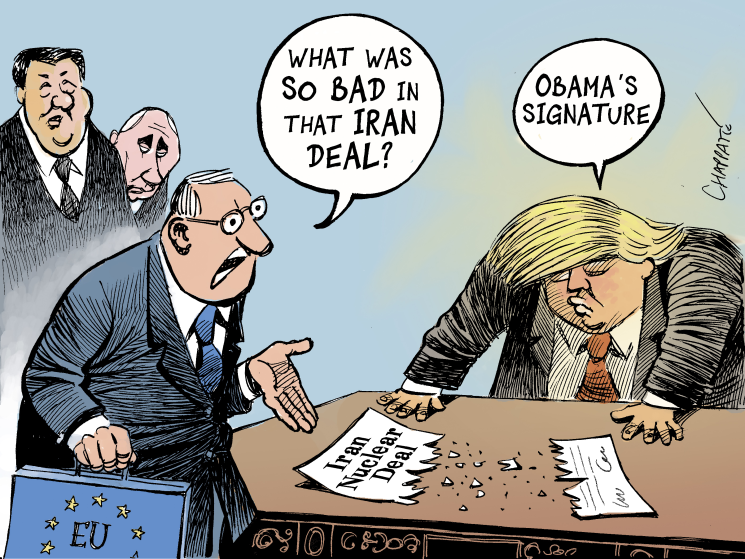 President Trump’s decision to withdraw the United States from the Joint Comprehensive Plan of Action, commonly called ‘the Iran Deal,’ has gained us nothing – and could potentially cost us much on down the road.

The president’s allies delight in yet another decision that “triggered the libs” by undoing a cornerstone achievement of President Barack Obama on the world stage. But while the president may have satisfied his domestic base and his own obsession with tearing down his predecessor’s legacy, the consequences will reverberate far wider than that. His choice has left American isolated and weaker than before, and perhaps even substantially less safe.

First, we are isolated from our allies – namely the United Kingdom, France, and Germany – who remain a party to the agreement’s terms. Though the Europeans did their level best to change President Trump’s mind (French President Macron through a traditional state visit, and U.K. Foreign Secretary Boris Johnson via a morning Fox News appearance), the American president would not budge. Now, as he re-imposes old sanctions, two problems emerge.

For one, our economic policies alone will not change Iran’s behavior – it was only an international sanctions regime (including reluctant partners like China and Russia) painstakingly built over years that brought Iran to the table. But worse than the United States being relegated to the sideline is the fact that in threatening to punish anyone who does business with Iran, we may end up sanctioning our own allies.

Our word as a nation is also left weaker than it was before. Right before a historic negotiation on North Korea’s nuclear stockpile, President Trump has sent a clear message: The United States cannot be trusted to adhere to diplomatic agreements. In the past, we made an effort to stay somewhat consistent from administration to administration and show that shifting domestic political winds don’t mean constant policy U-turns; President Trump has challenged that norm, not just vis-e -vis Iran but also with his critiques of NATO, punting on the Paris climate goals, and waffling on international trade.

Even for those who find that consistency argument unpersuasive, a problem remains specific to the question of nuclear weapons. The lesson North Korea may have learned this week is that if they give up their nuclear weapons, the United States may simply take back economic or security-related reciprocal benefits on down the road. This creates an incentive to maintain nuclear technology or processes in secret – which in turn creates the risk that they will be caught in this cheating behavior. It is a potentially vicious cycle.

And finally, there are long-term security risks presented by President Trump’s withdrawal. For now, limits on and inspections of Iran’s program remain, thanks to the other countries that are keeping with the agreement. But should it collapse completely (in which case the United States will certainly be blamed), Iran will be left with no constraints on its program whatsoever – and we’ll have no way to know what they’re up to, which could set us on a course for a conflict in the Middle East far worse than even the Iraq War.

A possible military conflict might not be limited to just the United States and Iran, either. Saudi Arabia has already said that if Iran restarts its nuclear program, they will take corresponding action. If the Saudis begin pushing for the bomb, other countries in the Middle East surely will too; this new arms race would blow more than 40 years’ worth of work in building international norms and rules against the proliferation of the most dangerous weapons in the world.

President Trump certainly has a talent for playing to his domestic audience. But this week, he has forgotten once again that there is a world beyond him and his fellow Fox News viewers. By withdrawing the United States from an agreement that was working to prevent an Iranian nuclear weapon, he has opened us up to consequences for months and years to come. Unfortunately, for now, there’s little more we can do than watch to see what happens next.