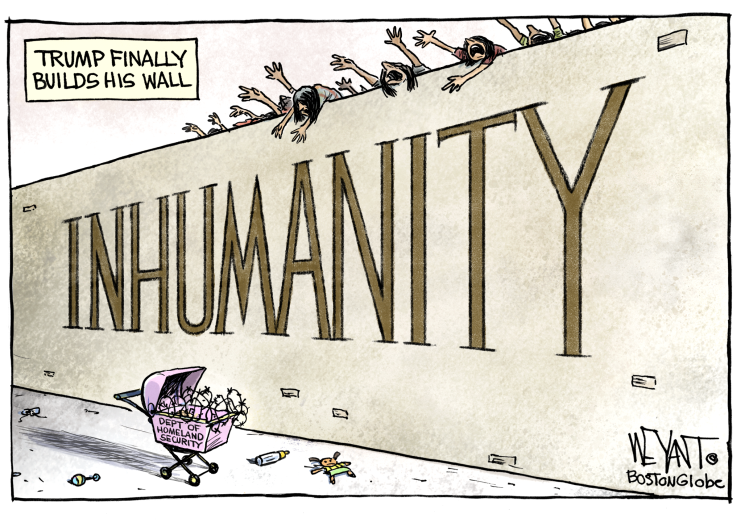 Is it necessary, in the year 2018, to write that it is wrong for any country – let alone the United States of America – to forcefully separate parents from their children?

The Trump Administration began doing just that at the beginning of May, when Attorney General Jeff Sessions announced a ‘zero tolerance’ policy that would send parents attempting to cross the southern border to jail where children cannot follow instead of putting them together in family detention centers. Since the change was implemented, hundreds of children, including toddlers, have been taken from their parents; the resultant confusion has created a backlog within the Department of Health and Human Services.

And to be clear, this policy does not apply only to those crossing illegally. Asylum seekers – those who are fleeing extreme violence and danger in their home countries and presenting themselves to authorities – are being detained and punished in this way simply for appearing at the “wrong” location. This is, unfortunately, the logical end point of the administration treating a caravan of innocent and desperate migrants like an army marching on the southern border.

In a rare moment of humility (but a classic moment of dodging responsibility), President Trump tried not to take credit for this latest atrocity. Instead, in the midst of a classic Twitter diatribe, he blamed Democrats for a law that forced federal agents to separate mothers and fathers from their kids at the border. There is, of course, no such law; what’s more, Sessions as well as White House Chief of Staff John Kelly have both previously praised the deterrent value of their new policy. (The deterrent is not working, as arrests have risen for the third month in a row.)

In many cases, we have come to count on the incompetence of the Trump Administration to temper its malevolence. That is not a viable strategy, however, to address its action when it comes to immigration.

Time and again, it is spite rather than reason that animates this administration’s immigration policy. In the midst of a historic refugee crisis, we admit the lowest number of refugees ever despite having an exhaustive screening process that keeps us safe. Hundreds of thousands of people who have found safety and community in the United States by way of Temporary Protected Status are being forcibly evicted, sent back to countries that do not have the infrastructure to receive them. And of course, DACA – a program that enjoys vast public support, and allows those who came to our country as children through no fault of their own to stay so long as they meet higher academic and legal standards than native born citizens – was scrapped, and any attempt to renegotiate it scuttled by draconian, maximalist demands.

Against the backdrop of the president’s own history of racist words and actions, as well as his dogwhistling and winking towards white nationalists and white supremacists, it is hard not to see all of this as both deliberate and ideological. President Trump’s most ardent supporters, after all, are unapologetic in demanding what they want: a white America for white Americans. Why shouldn’t we believe them when they say it? And why shouldn’t anyone who claims not to share that goal be responsible for offering real rationale for these policies?

The world is watching the United States – specifically, watching how our leaders talk about and treat our fellow human beings. We desperately need an immigration policy based on something other than abject cruelty and flagrant racism. And there is no doubt that history will look back unkindly on those who fail to understand that what we are doing now is plain and simply wrong.