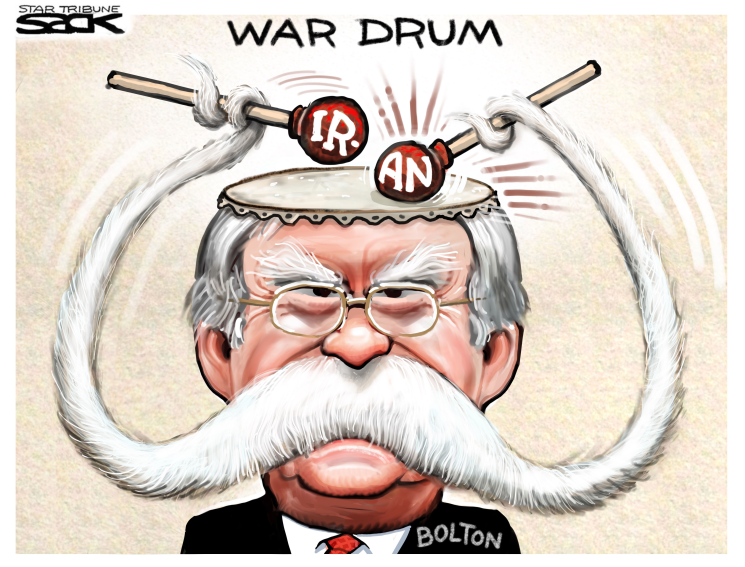 Tensions between the United States and Iran have been on a steady decline over the last two years, but the past week or two have seen things getting alarmingly worse. Almost as concerning, however, is that the president may not be entirely to blame.

A series of escalatory moves - starting with the deployment of additional U.S. forces to the Persian Gulf and new unilateral sanctions on Iran and ending with the alarming withdrawal of U.S. diplomats from Iraq due to alleged Iranian threats - have all contributed to a growing dread that we may be on a collision course for conflict. The Pentagon even recently reviewed a plan to send up to 120,000 men and women in uniform to the Middle East in response to any Iranian aggression.

But according to more recent reports, President Trump is frustrated by it all, and unconvinced he even wants a war with Iran. So who does?

The same man who's always wanted one: John Bolton.

Bolton had been a loud and public advocate for war with Iran since his controversial time in the George W. Bush Administration. He is a vociferous opponent of diplomacy, and his zeal for conflict isn't limited towards just Tehran - he is unapologetic about his support for the Iraq War, and has pushed for preemptive strikes and interventions from North Korea to Venezuela.

It was Bolton who made the announcement about sending a carrier strike group to "send Iran a message." And the news that the intelligence leading to the Iraq personnel withdrawal is highly suggestive of his style as well - especially given that some of our allies, in particular the British, have said the threat is being exaggerated. (Bolton infamously pushed politicized intelligence in the lead up to the Iraq War.) Taken with the fact that President Trump withdrew from the Iran Deal against former Secretary Mattis' advice only after Bolton came on board his administration, a clear picture of his corrosive influence starts to emerge.

Bolton as a warmonger is not a revelatory idea. The more interesting (and frightening) thought is Bolton as someone who is dragging, or even manipulating, the president towards a position - and an armed conflict - that he does not want.

While no one can deny that President Trump has been aggressive in his own posture and rhetoric towards Iran, there was always a contradiction there. Candidate Trump campaigned against foreign interventions, especially in the Middle East; it was this isolationist streak that turned so many like Bolton off from serving early on in the administration. The president must also recognize that his base (and the majority of the country) is opposed to wars of choice, thanks to normally friendly voices like Laura Ingraham and Tucker Carlson.

So the question for President Trump is: in the face of his own instincts and the views of his most vocal supporters, will he continue to allow Bolton to push him around? The situation in the White House seems reminiscent of Steve Bannon's tenure as a senior advisor - constantly overshadowing the president, and being seen as his puppet master. Will he allow Bolton to have a similar outsized influence, all for a policy that would put our troops at risk and launch another unpopular Middle East war that would make the Iraq War seem quaint by comparison?

In other words, who's the boss?