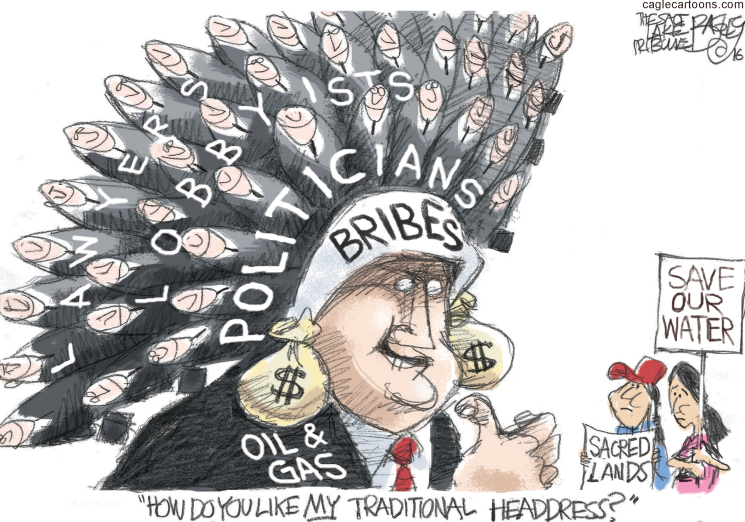 It is sad in this day and age that some people believe American Indian tribes are incapable of addressing their people's basic needs.For decades, tribes have created businesses to serve their citizens and the public good.But it seems that when tribal businesses succeed, competitors and critics undermine them by asserting that Native American tribes could not possibly have created a successful enterprise themselves.

Those who oppose the idea of American Indian tribes operating successful businesses that compete with non-tribal rivals sometimes use offensive terms to create the illusion of nefarious conduct.One of the ugliest assertions is that a tribe's success occurs by "renting" itself to non-tribal members, who abuse it for iniquitous purposes.

American Indian tribes are sovereign; they have the inherent authority to govern themselves free from outside interference. Sovereignty is acknowledged by the federal and state governments through treaties, laws, executive orders, and intergovernmental agreements, and confirmed by centuries of United States Supreme Court and lower court precedent.

Instead of taxing citizens to pay for a bridge, community building, or meal program for hungry seniors, tribes' funding comes from their businesses. (Most Americans are familiar with tribal casinos but are surprised to learn tribes operate businesses in energy, government contracting, retail, hospitality, and fintech.)

The term "rent-a-tribe" originated in gaming, where attacks started as soon as tribes became a competitive threat to non-tribal casinos. Opponents suggested that tribes' practice of hiring capable vendors to provide services related to casino operations was akin to "renting" sovereignty and detracted from the tribal ownership of the business, even though many non-tribal entrepreneurs engage in identical outsourcing practices when starting a new business in a regulated industry.

Today, tribal gaming has arguably reached its economic peak in Indian Country. Many tribes cannot rely on casino revenue to meet the needs of their communities, which is why they started looking to the internet. Online tribal lending is a key economic engine for American Indian tribes thanks to rapid technological innovations, the ability of consumers to engage in business with geographically-isolated tribes through the internet, and tribes' competitive advantages.

For example, as elected Chairman of the Lac Vieux Desert Band of Lake Superior Chippewa Indians, I am responsible not only for the operation of our Tribal government, but also stewardship of our culture, our lands, and our way of life. Alongside our Tribal Council and with a heavy dose of entrepreneurial passion, we operate businesses that provide jobs for the region, strengthen our tribal economy, and fund important social and cultural programs.

We are the largest employer in our area. Over forty percent of our Tribe's general fund is generated from our government-to-consumer lending business, and revenues generated by tribal lending improve cultural preservation efforts, housing, health care, law enforcement, elder services, education, and infrastructure in and around our isolated reservation in Michigan's Upper Peninsula.

We are not alone - dozens of tribes across America operate successful government-to-consumer lending businesses.

We understand that business is competitive, but it is reprehensible when critics imply that we are unsophisticated or have been "suckered" into business relationships. The suggestion that my Tribal Council and I (or the governing body of any tribe) would place our sovereignty for sale to the highest bidder is deeply offensive. Each of the 573 federally-recognized American Indian tribes has the freedom and authority to engage in legal business operations (like tribal lending).

At a time when America needs greater civility and honest discourse, a term like "rent-a-tribe" should be retired permanently. This term is a shameful relic of the past.American Indian tribes' pursuit to operate businesses to generate revenue and ensure their self-sufficiency and self-determination should be applauded, not villainized or discounted.

James Williams, Jr. is the longtime chairman of the Lac Vieux Desert Band of Lake Superior Chippewa Indians, a small Tribal community located in the western end of the Upper Peninsula of Michigan. Williams can be reached at [email protected]

The Need to vacate this summer by Tom Purcell
I sure could use a vacation about now — but I have no plans to take one this summer. That’s the breaks for self-employed people like me who do not enjoy paid-­vacation benefits. When I do not work, I do not get paid. However, nearly one in ...
Supreme Court ruling is not the end of abortion divide by Christine Flowers
On what should have been a morning of joy, I could not escape the darkness. Churches have been vandalized. Pro-life clinics have been fire-bombed. Supreme Court justices have been targeted. A president has called millions of Americans enemies to ...
Democrats want to raid Medicare to pay for Obamacare – again

by Phil Kerpen
There were a lot of ingredients in the 2010 Republican electoral landslide. Perhaps the most significant was that by raiding $787 billion from Medicare to pay for Obamacare, Democrats gave the “Medicare cuts” club they had used to beat Repub ...